I’m driving alone, snaking along the elevated highway that cuts through downtown New Orleans, and I reach out and jab the number 6 preset on my radio. 101.1 WNOE, New Orleans Country Station: as mainstream as country music can get. Some of the songs are all right. Most are terrible. The one where a man mourns a break-up but pretends it doesn’t bother him: that one’s ok. The one with a chorus of men abdicating all responsibility for their reckless partying: that one’s horrible. But I don’t care. I keep it on as the sunset deepens. Bats—or are they swallows?—take to the skies in search of dinner, arcing over the lines of cars as they careen among the rooftops. The songs, even the ones I’ve never heard before, make up the soundtrack to a relationship I no longer have, recall a person who no longer exists.

Before meeting Lena, I hated mainstream country music. I could listen to Patsy Cline or Lucinda Williams all night—anything classic, anything with an edge or even a touch of craft—but the country that typically plays on the radio? Forget it. It seemed to be one continuous anthem for white, heteronormative, patriarchal America, profiteering off the kind of small-town culture that would not be welcoming to someone like me—or many others. Not to mention the god-awful lyrics.

But Lena, my first love, adored it. We met on the first day of college at an ice-breaker in our dorm. By nightfall, she was sitting on my twin bed playing Tim McGraw and Garth Brooks, belting along—I had a barbecue stain on my white t-shirt, you were killin’ me in that miniskirt…. Who was this country-music-loving New Englander? I both hated and loved that she seemed to be playing this garbage as if to impress me.

A week or two later, I confessed my attraction. To me it was obvious; I’d spent four years of high school pining for someone like her. However, after my brief, casual speech—which went something like, “I like you, let’s do this”—Lena drew back, her face pale and distorted, and she quite literally ran from the room. The dorm room door slammed.

Lena, a difficult and charming woman, equal parts magnetism and ego, had never consciously considered the possibility of being attracted to another girl. Now that she had, she was terrified—of who she might be, and, with good reason, of her family’s reaction to such a transgression. Even though it was 2006 and experimentation in college was hardly atypical, Lena came from a tight-knit, conservative family that was ever-present; although she grew up states away, her family had ties to the area, and her parents were even alumni of the college itself. For Lena, kissing me for the first time—even on the most liberal of liberal arts campuses—was akin to leaping off a cliff: great freedom and great risk. Impossible to reverse.

Over the next four torturous months, we spent nearly every minute together, rigorously postponing the inevitable. Out of both pride and respect, I refused to make the first move. She was too afraid to commit to this new identity, this new visceral obsession (because that was what it was—it wasn’t “experimentation” at all), yet she was also afraid to reject it. The results were thrilling and devastating and all-consuming. After my initial confession, we said nothing on the subject; to speak openly about what was unfolding would have been as dangerous as the act itself. Instead, the country songs she insisted on playing gave voice to our suffocated courtship—spoke the saccharine lines we couldn’t, or wouldn’t, say to each other, our throats throbbing with words, our bodies throbbing with want.

By autumn, however, the country songs stopped registering like love letters arriving in my mailbox with no return address, but instead like little fuck-you notes. The time we took some fruitless trip in her red Volvo, for instance, fruitless trip-taking being one tactic she’d come up with to keep us close, but not too close. There we were, holding hands, and not chastely, the whole way to nowhere—and some dumb song comes on the radio about a couple in a pickup truck cruising a dirt road with the windows down, and they had all the time in the world because at the end of this long, star-studded night, their bodies would finally come together in gorgeous hetero-union. In contrast to our situation, the joy was in the waiting.

The music was painfully ironic during this period of mutual resistance. The noise threatened to drown out my love, my desire. Each song was a story that silenced our own, and that story was policing all the backroads. But Lena didn’t see it that way, at least not then, since there she was, half-reaching for me, blonde hair shining, singing along.

I hope you’re wearing those frayed out cut-offs
Makes me want to get lost down in the moonlight
Drop the tailgate down on a turn road
Watch the corn grow, baby that’s a good night

Eventually, we did drop the tailgate, so to speak. Beneath a streetlight in the freshman parking lot, across the center console of my old Honda Accord, she kissed me. For once, the radio was off. The leafless trees stood silent and expectant through windows that, within minutes, would fog.

From that moment on we were all-in, although we were still in hiding. On every drive we took over the next year and a half, whipping along the winding roads to campus, she blasted country music. Now that we were a couple, I gave her grief for it, pointing out the chauvinism, sentimentality, and cultural insensitivity of songs like “Indian Outlaw” and “Mr. Mom,” and, well, all of them. But at the same time, I knew the music was perfect for her. It embodied her questionable politics; her shameless romanticism; her stubborn loyalty; her infuriating tendency to ignore nuance and choose extremes; her fear, for as long as I knew her, of showing vulnerability. She was a cowboy, in other words. And when she sang along, bending her sandy-sweet voice to the twang, hitting all the low notes, I swooned.

Lena eventually came out to her family. By that time, it was too late for us. There were undoubtedly plenty of reasons why we wouldn’t have lasted. But those reasons were obscured by The Reason: our relationship, according to the world she belonged to, could never transcend its essential wrongness and just exist. We both over-compensated for this perceived violation. Where the world denied us acceptance, we devoted ourselves blindly to what we had. In order to protect it, we gripped it as tightly as we could. We shut out friends, made spontaneous, sometimes reckless decisions, and stirred up jealousy and possessiveness (in her) and rebellion (in me). In the end, she had more stamina than I. More loyalty to our love that couldn’t, after all, end like a country song.

A few years after we broke up, Lena was diagnosed with cancer. Three years ago, she died at 26. It felt like losing a comrade. Although our relationship was tumultuous, both before and after our romance officially ended, she was my first—my first love, my first loss, and even, eventually, the inspiration for my first book. Each of us, for the other, catalyzed a coming-of-age experience that would leave us both changed forever: I lit the match, she tossed it into the brush, and we stood holding hands at the edge of the field while it flared with danger and heat and light. Just the two of us alone with the burning.

Now I’m left with the music. I might go weeks without it, but I always return with the fervor of an addict. Any country song, even a brand new one, evokes her and who we were to each other. I can almost hear her singing along, her voice coming in and out as if stretching across a bad connection.

She said, I bet you don’t remember me
I said, Only every other memory

All those pickup truck songs—all the wide-open windows and cut-offs and painted toenails on the dash—still rankle me with their boy-meets-girl insistence. But even this anger is a form of remembrance. The songs take me back to our rides along those rural roads, pulling off to the side to fool around since there was nowhere else we could go. Lena looking over at me with a gleam in her eye and a twang in her voice, the two of us doing the best we could at the time, and how it wasn’t nearly enough but it was what we had. 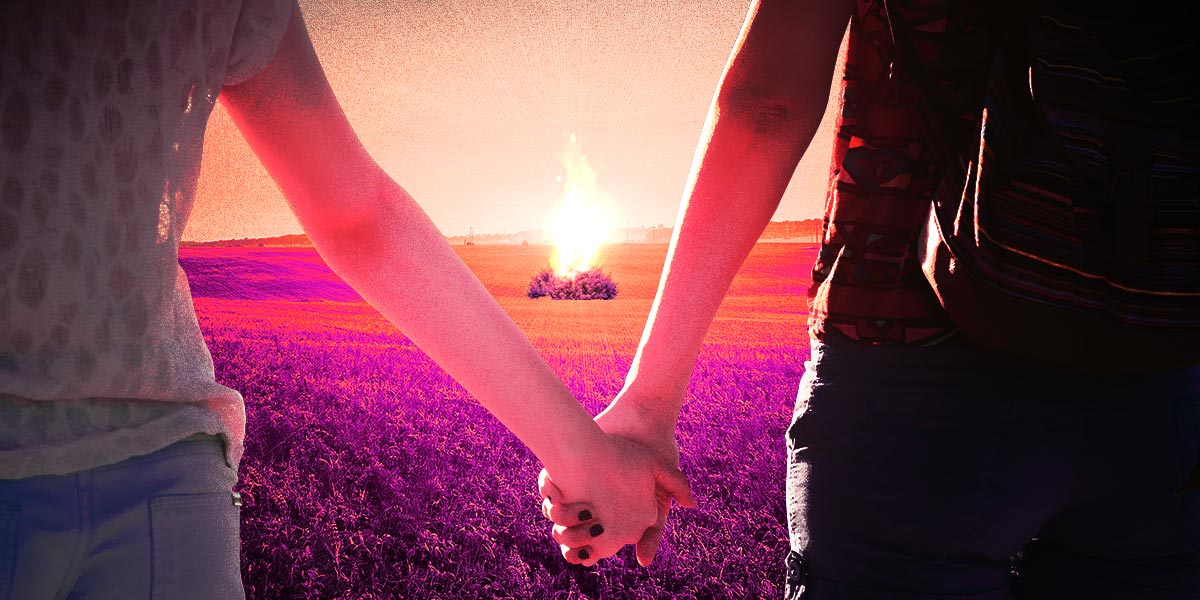 Cassie Pruyn is the author of the poetry collection Lena, which details the relationship at the center of this essay. Lena was the 2017 winner of the Walt McDonald First-Book Prize in Poetry through Texas Tech University Press. Cassie Pruyn is also the author of Bayou St. John: A Brief History (The History Press, 2017), and her poems and reviews have appeared in The Normal School, The Los Angeles Review, The Common, 32 Poems, Poet Lore, and elsewhere.

Cassie has written 1 article for us.