“Hostile,” the season one finale of Marvel’s Runaways, picks up where we left last week: with the teens directly facing down their parents. After Dale takes out Gert’s dino with a tranquilizer and Molly, Chase, and Karolina all fail to penetrate the forcefield protecting their parents, Jonah steps in to raise the stakes of the battle. The teens remain resolute in their determination to fight back, but it’s immediately clear that they aren’t powerful enough. Karolina, the selfless angel that she is, tells them to save themselves while she stays behind to hold off Jonah for as long as possible. It’s a dramatic start to an episode that remains adrenalized throughout but also makes sure to weave more nuanced and emotional character work into its frenetic plot web, reminiscing of a lot of the strengths in the show’s pilot.

When Karolina asks the others to run, Nico at first refuses. “You can’t do this alone,” she pleads. “I’m not leaving you.” I haven’t praised Lyrica Okano enough this season for her performance as Nico. She’s funny in Nico’s dryer moments, but she also has been killer in these more intense scenes. Previously, we’ve seen this level of emotion from Nico when talking about her sister Amy. As she begs Karolina not to essentially sacrifice each other for their sake, it’s clear that she can’t bear to lose someone else she cares about. But Karolina convinces her to go, and the rest of the teens get away, unsure of Karolina’s fate after a massive explosion of energy that wipes out all technology in the immediate area. Nico’s barely hanging on at this point, begging the others not to talk about what may or may not be dead, insisting on returning to the site to see if Karolina made it. “We gotta be smart. I mean look at us,” Alex tries to reason. “Yeah, we’re missing someone,” Nico points out.

Karolina and Nico’s arc has been one of the best developed stories of the season, and I don’t think that’s just my gay-bias (lesbias?) speaking. Marvel’s Runaways has been moving fast—too fast sometimes. And in its attempts to make the parents complicated, the show has perhaps muddied the waters a little too much. After hinting at it for a while, the finale confirms that the parents have basically become so entangled with Jonah because they all thought they were going to discover a renewable energy source that could save the world and make them rich? I’m still not totally convinced by Jonah as a character: He’s too broadly written, too cartoonishly evil. And the parents are starting to seem dumber by the day. Frank’s sudden allegiance with Jonah—even if it is to protect Karolina—happens hastily. So does Leslie’s realization that even she can’t trust Jonah. 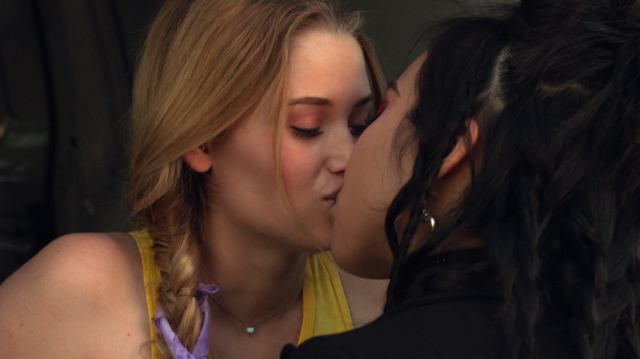 And this all brings me back to Karolina and Nico, a shining beacon of strong character development and a satisfying slow-burn romance on the show. There’s something distinct about Nico’s dynamic with Karolina compared to her dynamic with Alex. Nico and Alex got together quickly, and that doesn’t by any means diminish what they had, but the more measured pacing and subtlety of Karolina and Nico’s flirtations has led to great payoff, especially since so much of the build-up was really fixed in Karolina’s perspective, making it harder to discern where Nico might be in all of this. I was fully expecting an unrequited-crush-on-a-friend storyline, but we end up getting something surprising, raw, and happier than that. Nico likes Karolina back.

She likes her a lot. When Alex tries again to insist that they need to keep moving forward, she reminds the group that they have to think about each other; they’re a family now, and Karolina did everything she could to protect them, so they have to do the same for her. In fact, when Karolina wakes up in Leslie’s room in the Gibborum church, the first words out of her mouth to Jonah are “where are my friends?” Nico’s desperation is fully felt, and the others agree, hatching a plan (involving appallingly bad “disguises”) to break Karolina out of the church. It works, and the family is back together again.

Then Nico and Karolina kiss again in the woods where the teens are camping out, but not before the following exchange:

Karolina: You should have run.
Nico: Some of us wanted to.
Karolina: Not you.
Nico: Nope, not me.

Between Nico’s nervous energy and Karolina’s big goofy smile, it’s the most tender scene of the season. Even though so much bad shit is happening all around them, Nico and Karolina can’t ignore their feelings for one another. It’s like they kissed last episode and realized they had to protect one another no matter what, the first kiss opening up new intimacy between them that has been hinted at all season—in little glances, smiles, the way they stood and sat way too close to each other when getting ready for the dance. Now here they are spooning in the back of the stolen Gibborum van! My heart! Runaways needs this touch of sweetness. It needs the moments that remind us that these are a bunch of teens with insecurities and hormones and compounding emotions that can sometimes feel as big and pressing as the end of the world even when they’re about seemingly trivial things like whether someone likes you back or not. Nico also makes sure to tell Gert that Chase is every bit as into her as she is into him. 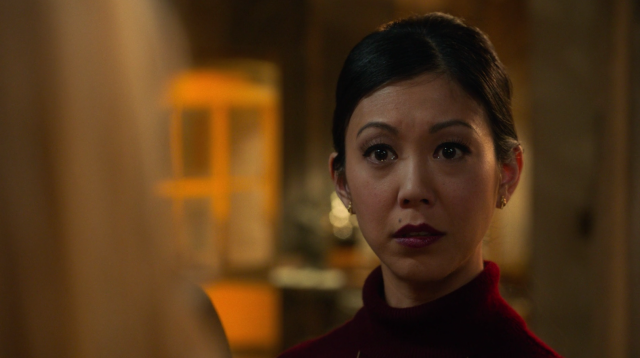 Little do they know that while they’re just starting to explore each other, their mothers are breaking up. Okay, I know that Leslie and Tina weren’t actually dating (a girl can dream), but it has been firmly established that they were two members of Pride that actually had each other’s backs—or so Tina thought. Leslie reveals that she knew that Jonah killed Amy. The hurt and anger in Tina’s eyes slices.  “If we killed you tonight in the basement, no one would ever know.” But Leslie reminds her that she’s their best shot at getting close enough to Jonah to take him out. So at its most fractured, Pride—minus the Wilders who have decided to go their own way—has to come together as a united front against Jonah. The parents are maybe sorta trying to do the right thing now but only because they’re in too deep with Jonah, only because their own kids are now the ones in danger.

But they only have themselves to blame for losing their kids’ trust. The faceoff at the pit (which, by the way, Dale and Stacey have discovered contains a living creature rather than an energy source) acts as the final catalyst to get the teens to runaway for good. They turn away from their parents, who might not be wholly bad people but who definitely have done bad things for selfish reasons, resolutely. But as they’re about to hit the road, the Wilders play their card, issuing an AMBER alert for Molly and tying the rest of the teens to Destiny’s death, making them all wanted by the authorities. So now they’re on the run quite literally, with Old Lace—the name Gert officially gives her “emotional support dinosaur”—in tow.

Marvel’s Runaways has been renewed for a second season, so catch me screaming about Nico and Karolina’s height difference when the show returns.

Kayla has written 273 articles for us.