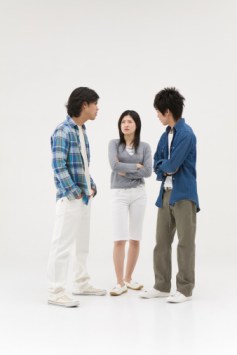 Dear Autostraddle: “So, a lot of members of my family are being serious assholes about my cousin being trans. It just sucks to feel like I can’t really articulate to them why their attitudes are so shitty. Is there anything that I could do/say? They’re all just so stubborn.”

Answer: I think a lot of “shitty” attitudes about trans people come from a SERIOUS misunderstanding of trans identities, gender dysphoria, and our transition needs. I’ve written before about how to explain these things to non-trans people as a means of combating transphobia.Other people have used analogies to try to communicate the feeling of persistent incongruence between the gender you feel in your mind and the gender expressed in your body. (I like to think of it as less of a mind/body dichotomy and more “the incongruence between one’s true gender identity and society’s perception of one’s gender.”)

I don’t think we even need analogies. This is how I explain it succinctly and simply to non trans people: If I was talking to a non-trans man, I’d say, “Imagine when you were a kid, your parents made you wear dresses sometimes and gave you dolls to play with. What if they called you Lizzie? Let’s say when you lined up for recess, your teachers told you to stand in the girls line. And maybe you got sick of fighting and wanted to make everyone happy/proud so you learned how to put on make up…. Wouldn’t you still be a man? Would any of that stuff have made you a girl?”

That’s what it is to be trans. It’s everyone seeing you as something you’re not and you living a certain way because of that grave misperception. But ultimately, you are still a man. Because after all, science, history, and experience tell us that there is far more to gender (even far more to sex) than chromosomes, genitalia/anatomy, and hormones. (See Evolution’s Rainbow for just a sample of the gender diversity in nature; while you’re at it, Wikipedia “intersex” for a general introduction to the multitude of ways chromosomes, anatomy, and/or hormones can result in unexpected or atypical sex and gender expression.)

Then I’d ask the man to imagine how he would feel if he was stuck living as a woman, being constantly seen as a woman. Even if he could live as a non-stereotypical and somewhat masculine woman, wouldn’t he feel trapped? Wouldn’t he be miserable, not having anyone see him as he truly is? Wouldn’t it be depressing to look in the mirror and not be able to see himself?

That is the source of gender dysphoria, though I have yet to be able to fully communicate just how awful it feels and how crippling it truly is. And that is why some trans people transition. Because we can no longer live a lie, no longer live as someone we are not, and we need to be able to express our true gender to the world and have them finally see it.

That’s the best I can do in explaining it to non-trans people who need to “get it” in order to accept someone’s gender identity and their steps in transition.

Best of luck with your family and thank you for caring!