Does the name Jamie Babbit sound familiar? That’s probably because her other two films, Itty Bitty Titty Committee and But I’m A Cheerleader, were movies that your first girlfriend made you watch when she heard that you’d never seen them before. They’re staples of every vegan feminist co-op’s film library, old standards on LOGO’s daytime movie lineup, and if you haven’t seen them, here’s your very own personal recommendation to go check them out now. They’ve got that DIY campy feel that queers can’t seem to enough of, and when I heard Babbit was making a new lesbian film, I was excited to return to the magical world of claymation penis monuments and RuPaul in short-shorts. 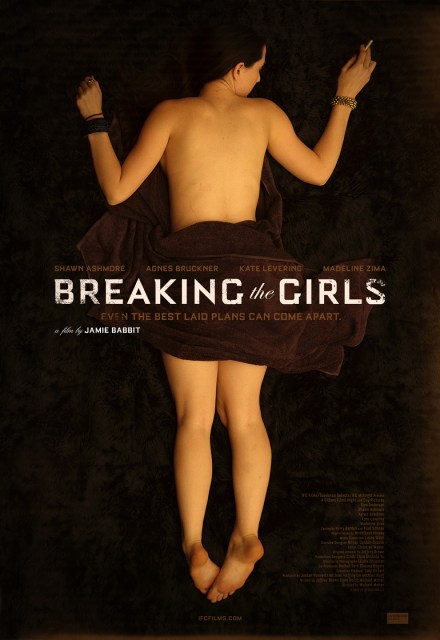 I’ve got news for you, queers. Breaking the Girls is not the kind of movie where you are going to see RuPaul in short-shorts. Not unless RuPaul’s corpse is in short-shorts when they find him floating facedown in a SoCal jacuzzi. Breaking the Girls is a gay parade down a very different kind of street. In fact, it’s a gay parade into a pool, and then people shoot some of the people in the pool. There’s a lot of pools in this movie. And people getting shot, but mostly pools. 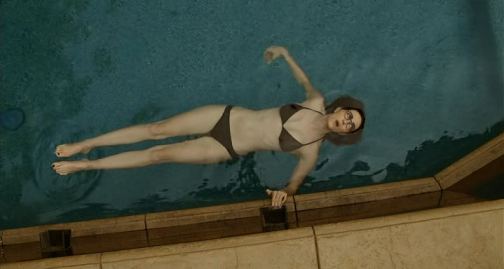 I’ll be real: Since there aren’t that many LGBTQ films out there, period, and since the selection we have is sometimes…lacking in quality and content…I tend to rewatch my favorites. And rewatch them, and rewatch them, and rewatch them. You get the idea. Breaking the Girls just doesn’t have that rewatchable quality to me. For one thing, it’s a thriller with plot twists that rely on you not knowing what in frozen hell is going on. Once you reach the A-Ha! moment, nothing is quite as satisfying – or as gay, but that’s all I can say without spoiling you.

As a special treat, there’s some tropes being recycled here that leave a taste in my mouth that’s all too familiar. You know, that mentally-ill-to-the-point-of-danger-lesbian-character taste? Not dissimilar to the taste of suicidal-rejected-by-straight-girl-lesbian-character, or lesbian-as-a-result-of-abuse-or-assault-or-fucked-up-family-situation-character taste, actually. Breaking the Girls has a little bit of all of these in their palate, and together they’re not terribly easy to swallow.

It’s hard to get around the fact that the only character who is self-identified as a lesbian is also batshit crazy, and she straight up murders people to win the love of her straight crush. That obviously backfires, since everyone knows that we can’t have nice things, even in fictional depictions of lesbianism where, oh, you know, our narratives don’t have to follow conventional stereotypes. Crazy, right? Breaking the Girls is a thriller, though, so even murderous crazy lesbians have more on their plate than meets the eye. Unfortunately, what’s going on below the surface (of the pool HAHA) isn’t really a rallying call for healthy sexuality either. There’s about a hundred tired stereotypes to keep the plot afloat (in the pool HAHAHA), so if you can stand all the daddy issues and straight couple afraid of queer desire, you’ll still have fun. 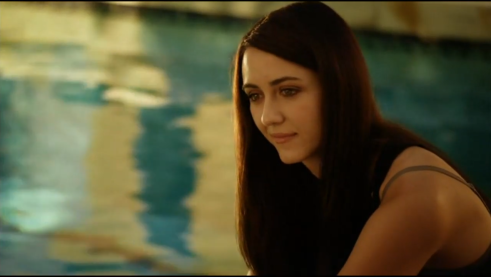 just being a batshit murderous lesbian next to the pool

I’ve said it about five times, but I’ll say it again: Breaking the Girls is a thriller, so it’s not meant to fill you with the warm and fuzzies. People are going to die, relationships are going to be dark, and you’re not going to totally get it until the end of the movie. If you’re looking for a lesbian movie to watch while you cuddle your girlfriend (or cat) and think about how wonderful and pretty the world is, this is not your film. If you’re looking for proof that the cute girl you have sex with in a pool is also a nutjob who wants to brutally murder people in your social circle, this is probably your film.

This is a good movie for summer because there’s lots of pool scenes, and you’ll want to go swimming afterwards. There’s actually a sex scene in the pool, even if you later realize that one of two fairly tame lesbian sex scenes in the movie (and don’t worry, there’s a much more graphic sex scene involving straight people) is actually about one of the girls using the other. Depictions of healthy sexuality, where art thou?

did i mention the sex scene is in a pool

This is also a good movie for summer because it’s the kind of movie that you want to see at a theatre with a lot of popcorn and a boob to consensually accidentally touch. You want to eat sno-caps and bump elbows with your crush and share one of those ridiculously oversized sodas that come in limited edition plastic cups. You want to walk her back to your place while you make fun of the predictable plot and have cutesy banter and then, after you kiss her on your staircase, you’ll want to go swimming. In a pool.

You can catch Breaking the Girls at a queer film festival near you, such as my very own philthy city’s Philadelphia QFest on July 12, LA’s Outfest on July 20, and in New York City on July 26. If you’re stuck at home, you can also find it on a bunch of video on demand providers, like iTunes, Amazon, Xbox, PS3, Google Play, and Nook. You could even watch it in your pool.