This movie night is a celebration of music and 90s nostalgia. It’s about coming of age and having none of the answers and just doing what you can to get along and damn The Man and save the Empire. It’s also about gaining unrealistic expectations of careers in music retail. 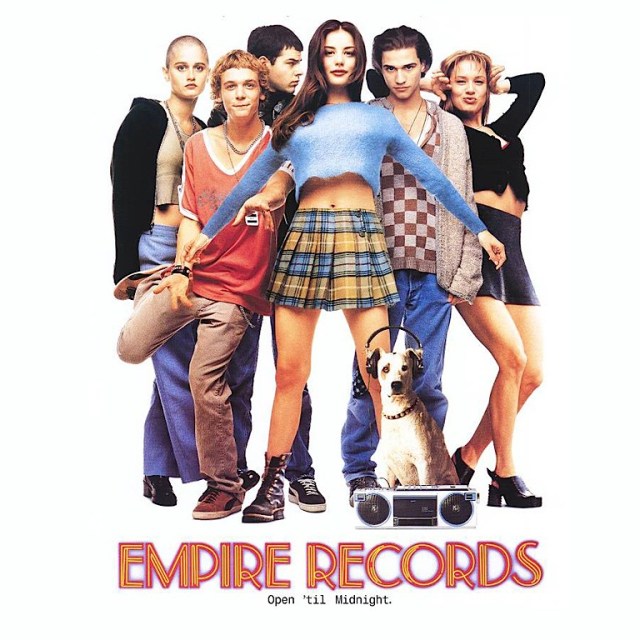 “Empire Records is a 1995 coming-of-age film that follows a group of independent record store employees over the course of one exceptional day. The employees try to fight off becoming a large chain, all while learning about each other. The film was directed by Allan Moyle and stars Anthony LaPaglia, Robin Tunney, Rory Cochrane, Renée Zellweger, Ethan Embry and Liv Tyler.”

This music is the glue of the world, Mark. It holds it all together. Without this, life would be meaningless.
– Eddie

What do you think the best song in Empire Records is? It’s a question I’ve been debating since I first saw the film at the impressionable age of thirteen. My friends and I were completely obsessed ’cause we knew these characters, we knew them better than any others on our screens at that time; we were Lucas’ fuck up and Gina’s jealousy and Cory’s dishonesty and AJ’s love-sickness and Debra’s suicidal thoughts. We were even a little Warren; we were suddenly desperate to get jobs in record stores too.

If you’ve never seen this film, it’d be worth watching for the quotable quotes alone, there’s one for every life situation. “Oh Sinead O’Rebellion, shock me, shock me, shock me” used to be my favourite, at thirteen, even though I didn’t actually understand the reference until years later because back then my CD wallet was filled with real-life Rex Mannings. Now it’s this one. 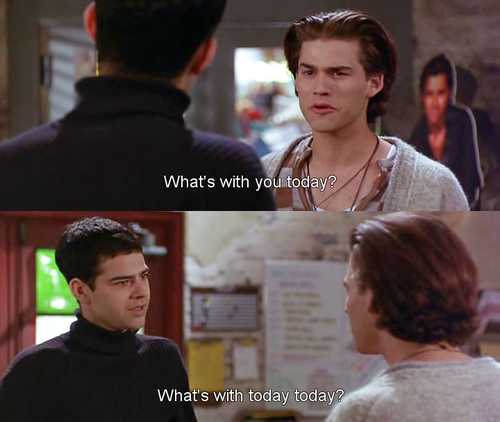 I feel like this movie still holds up 18 years later. My obsession definitely has. The only difference is that I no longer want to marry Mark (Ethan Embry) and I now fully appreciate the many things that I’d been totally oblivious to as a thirteen year old. Like just how damn hot Debra (Robin Tunney) is. 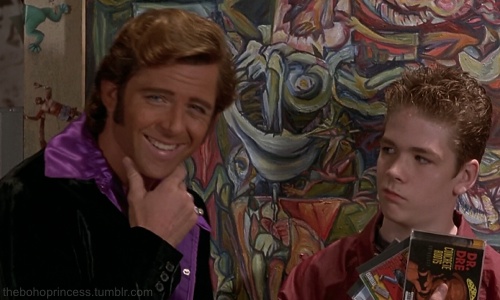 Back to that question about the best song, though. When Lucas drives to the casino to Ape Hangers’ “I Don’t Want To Live Today,” and when Deb cuts off her hair to The Martinis’ “Free,” and when everyone dances of the rooftop to The The’s “This Is The Day,” I mean, those soundtracks are pretty fucking perfect. “Seems” by Queen Sarah Saturday is probably my favourite song overall, and that it didn’t make it on the official Empire Records soundtrack still bothers me to no end.

I don’t feel the need to explain my art to you, Warren.
– AJ

Here are some ideas for how you can theme up your evening.

1. Suggest to your guests that they dress in their best mid-90s get-up. Wallet chains, baggy tees, plaid patterned skirts and cardigans should be encouraged. I wore my 2XL purple Green Day hoodie which is the only thing I still own from the 90s.

2. Play the Empire Records soundtrack while your guests arrive. If you skip “Sugar High” though then I don’t think anyone will hold it against you.

3. Give out Empire Records buttons! I didn’t do this because I don’t own a button-maker and also I’m not crafty, but if you did it then your guests (and I) would be super impressed. 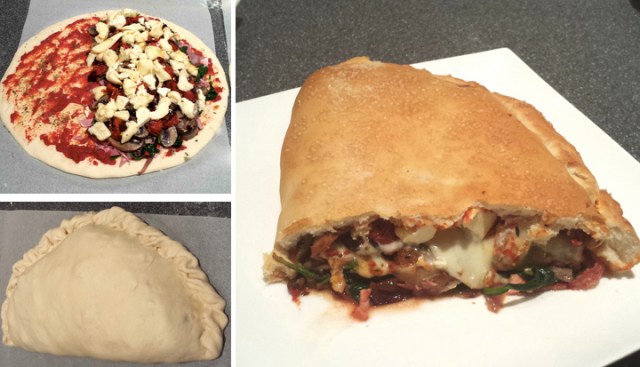 I brought some pizza just in case anyone got hungry.
– Eddie

Just like traditional pizza, calzones are super flexible; you can make single-serve ones or a few large ones to share, and fill them with whatever you like. “Do whatever you want” wouldn’t be a helpful instruction for first-time calzone makers, so here’s a recipe for two large calzones with a ham, mushroom, spinach and tomato filling. Just adapt the size and filling as you like!

First, make your pizza dough and heat the oven to 200 C / 390 F. Roll out two bases on a floured surface, to the thickness and size of a standard large pizza base – about 30cm across and 0.5cm deep.

Coat the cherry tomatoes and garlic with 1 tbsp of olive oil and bake for 10 minutes or until soft. While that’s happening, pour 1 tbsp of olive oil into a hot frying pan and cook the onion until softened. Add the mushrooms and once they’re soft, add your butter and keep stirring until it’s all browned. Season with a little salt and pepper, if you’re into that, and put it in a colander to drain any excess moisture.

Add the spinach leaves to the pan and stir until they start wilting, then put them in the colander too. The draining part is super important ’cause if your filling is wet then your calzone is gonna burst in the oven.

Are the tomatoes and garlic ready? If so, remove them and dice the garlic finely. Turn the oven down to 180 C / 355 F.

It’s time to assemble! Important: as you place the filling down, leave about 1cm /0.4 in of clean dough around the edges so you can fold the calzones in. Spread tomato paste on the whole surface of each base. On one half of the surface, lay down the onions, mushrooms, garlic, spinach, tomatoes, ham and mozzarella. Sprinkle salt, pepper and oregano on top, if you enjoy those things.

To finish the calzone, take the clean half of your base and fold it over so it covers the half that has filling. Pinch the edges so that it’s totally enclosed. Place them on floured trays and bake for 20 minutes on 180 C / 355 F until the dough is golden and the filling is hot.

Make the cupcakes as per the instructions on the box. Once they’ve cooled, slather icing on top and write “Happy Rex Manning Day” on the top with the gel. If have subpar cake gel penmanship like me, maybe you won’t be able to fit all those words on top. That’s fine! Just write any words that remind you of Empire Records. If you haven’t seen the movie yet, maybe go with these. They’ll all make sense by the end. 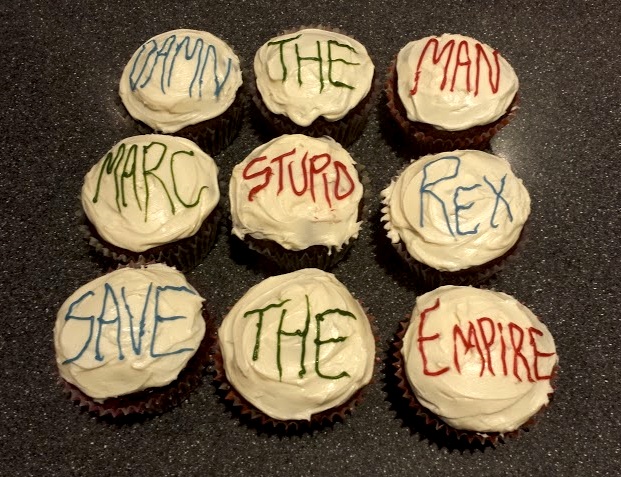 Share your Empire Records related feelings in the comments! What’s your favorite quote? And song? Tell me everything.