Being the softball player who used to pick dandelions in the outfield and only caught a pop fly because she threw up her glove to protect her face, it’s no wonder that I’m astounded by women like Michele Smith. Smith has a mile-long list of accomplishments in softball, including being a part of two-time Olympic gold medal American teams, one in 1996 and another in 2000. She’s got three world titles for Team USA.  She’s a member of the Softball Hall of Fame.  And now she’s got one more to add to her resumé of history-changing things.  She’s the first female analyst for a national broadcast of a Major League Baseball game. TBS had Smith call the Braves-Dodgers game on Sunday. Ladies, you are now welcome in the wide-world of baseball analysis, at least according to one broadcasting booth. And if you are as awesome as Michele Smith. 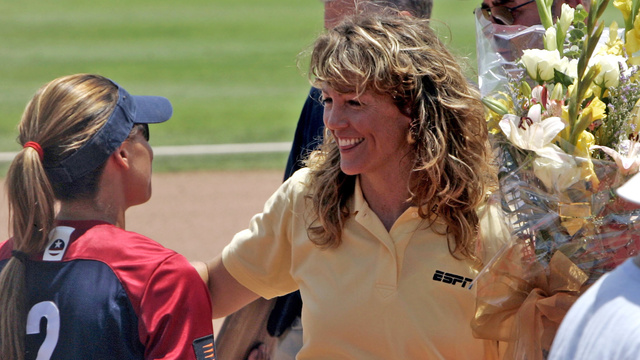 Smith is vocal about Title IX and what that means for women in the sports world. It’s no coincidence that this is the 40th anniversary of Title IX, a law that prevents girls from being discriminated against in any publicly funded school activity, sports included. One can infer from Smith’s comments, as posted on MLB.com, that she thinks the law is directly responsible for the recent successes of female atheltes, coaches, managers and, yes, analysts in the previously male-dominated sports world:

“It opens up the possibility that this is the 40th anniversary of Title IX, and how that ruling has changed women’s sports. If you look back at the last couple of Olympics, and, obviously, ’96 in Atlanta, women’s team sports were just outstanding. We just saw it again this year. Women have more opportunities on the field to make a difference on their lives. We don’t always have the opportunity to go on and have those professional dreams, though. Olympics are often the peak of women’s careers.

“We saw that in London, it’s inspiring,” she said. “These women who competed there are basically a generation of female athletes who have come from moms who have also been in Title IX — especially in team sports. Those of us who were in that era, 1996 Olympians, our moms really didn’t get the benefit of Title IX. They were pre-Title IX women. Now we find a generation of women whose moms competed, and we see the difference it makes in a young girl’s life, to be able to compete in sports and have that camaraderie.”

Ah, Title IX.  Title IX is the reason I was given the chance to suck hard at softball.  Basically, here’s what Title IX says:

No person in the United States shall, on the basis of sex, be excluded from participation in, be denied the benefits of, or be subjected to discrimination under any education program or activity receiving Federal financial assistance.

It says lots of other stuff too. And this was signed into law in 1972. And every time I think about Title IX, I have this complex, conflicting feeling. I love that we have Title IX and that it’s done wonders for women in the sports world. And at the same time I squirm that we need it, or that it’s taken this long to do something as simple as have an extremely qualified female sports analyst comment on a damn baseball game. I mean really, why is it a big deal?

We’ve come a long way, with projects like The Faces of Title IX presented by the National Women’s Law Center highlighting our accomplishments. Thanks to the inclusiveness promoted by Title IX, women can now run in the Boston Marathon and be sports writers and even play sports at all. And it wasn’t that long ago.  These stories are from women still running, still writing today. Title IX doesn’t just apply to sports, either – it covers things like sexual harassment and science, a field we know could use a little more diversification. 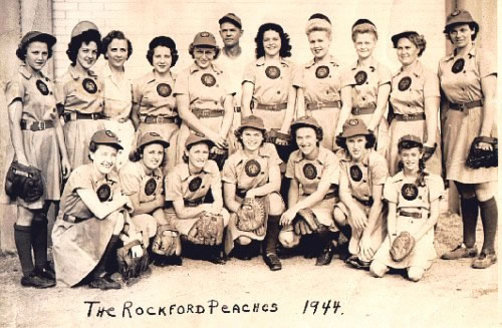 The Rockford Peaches. Women were amazing athletes before Title IX (naturally), but now they’re legally protected from discrimination. via bloglovin.com

But then there’s that other creeping feeling, the not so good one. Why were any of the above things ever even questioned? And why does the progress seem so slow? Every time a woman tries to do A Thing in sports, she gets ish for it. Deadspin reported on the sexist, misogynist tweets surrounding Smith’s successful sportscast, many of which questioned her abilities simply due to the simple fact that she is female. Some did not even deny her ability, but just said they didn’t want to listen to her because she was a woman. This on its own isn’t proof of our lingering backwards sports culture, but consider the overwhelming evidence (as if our own personal experiences haven’t been enough). Erin Andrews, an ESPN sportscaster, has had not one but two high-profile harassment cases. In 2009, Michael David Barett stalked Andrews and made a nude video of her by removing the peephole from her hotel door and filming through the opening.  He posted that video online.  In 2011, she was allegedly harassed by Keith Clinksales, an ESPN executive, when he masturbated next to her on an airplane. The first major sexual harassment case that I can remember really following came out of Madison Square Garden, with Isiah Thomas sexually harassing Anucha Browne Sanders and then firing her. Over and over again, we see that many sports foster a hostile environment for women. And when women succeed, sometimes we see a measure of shock and awe like the much of media coverage of how amazing the US Women did at the 2012 London Olympics. Basically these stories have one thing in common: women are assumed incompetent until they prove themselves, and occasionally they are still assumed incompetent after they prove themselves, and these assumptions are almost always based solely on the fact that they are women.

We can fix this. The patriarchy seems so big and scary sometimes, and it is. There’s a lot of dismantling that needs to be done. But people out there are working on it, tirelessly, and have been for quite some time. Take the Women’s Sports Foundation, for instance. 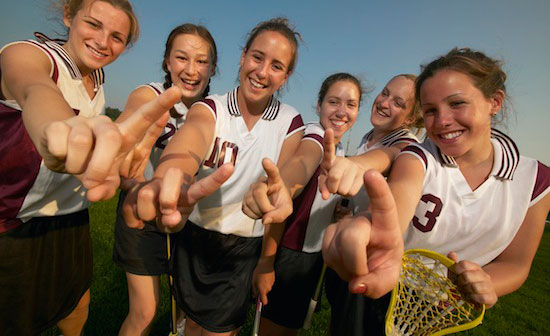 The Women’s Sports Foundation, founded by tennis player Billie Jean King, advocates for female athletes and provides grants and financial assistance to help with things like traveling to competitions. So let me conclude on an up-note, much like the one I started on. Progress happens, even in the boys club that is Major League Baseball and other professional sports, and we haven’t stopped marching forward. Title IX was a step and look how many steps we’ve marched forward since. We should all congratulate Michele Smith and look forward to the day when a female commenter in professional sports isn’t news because there are so many of them. A girl can dream, can’t she? Even a girl as bad at softball as I am.