Multiple sources in the reputable field of celebrity journalism have recently reported that 19-year-old model/actress Paris Jackson has been spotted seeking the favors of young women on exclusive celebrity dating app Raya. Jackson is best known for being the only daughter of Michael Jackson, though she has recently made a guest appearance on the truly bananas television program Star (starring known heterosexual Queen Latifah) and signed a modeling contract with IMG.

This reporter has personally been asking questions about Paris Jackson ever since she took a girl named Melissa Lauren to prom last year, though more recently she had been dating some dude with a Pantera tattoo featuring a prominent Confederate flag. In January, she told Rolling Stone about the “open-minded household” her father raised her in, describing a crush she’d had on a female celebrity when she was eight. “Instead of yelling at me, like most homophobic parents, he was making fun of me, like, ‘Oh, you got yourself a girlfriend.'”

According to an anonymous source who spoke exclusively to Radar Online, “Paris has made no secret of having crushes on girls in the past and wants to keep her options open… She’s not interested in making a big statement about her sexuality. She thinks it’s unnecessary in 2017, but she’s having fun chatting to sexy women online.” Aren’t we all?

More recently, Paris has been spotted hanging out with potential lesbian and carbonated vanquisher of police brutality Kendall Jenner, whose mother Kris has apparently been managing Jackson. She also attended the GLAAD awards wearing a Yanina gown featuring a rainbow peacock pattern.

What are we to take from this sudden barrage of information? Paris is currently the only one of her siblings to have sought a career in the public eye, and it does sound like someone with a lot of influence behind the scenes in Hollywood is determined to make Paris Jackson into a household name. However, if Paris is looking for a girlfriend, we recommend she look no further than fellow Hollywood starlet Bella Thorne.

Also, dear reader, if you don’t believe I’ve been speculating about Paris Jackson for at least a year, I brought receipts: 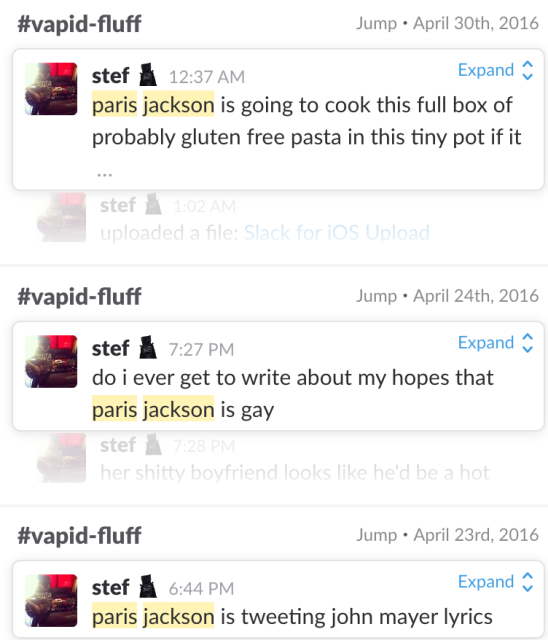