You can find part two in Caroline’s two-part climate change series — which includes resources for and tools — right here. 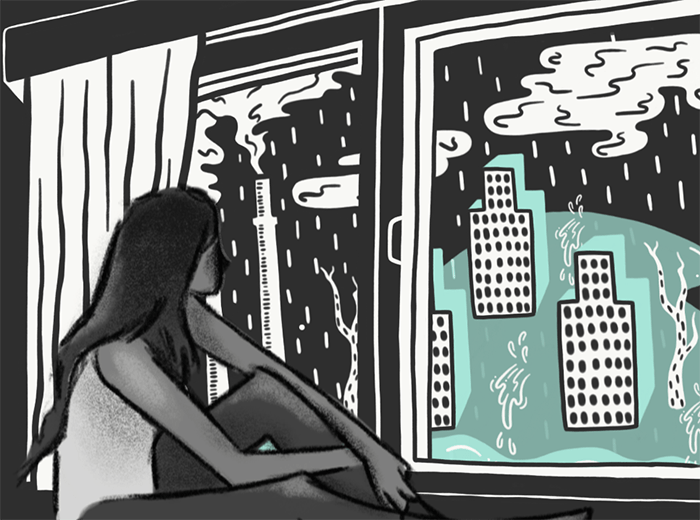 Climate change is here. It’s no longer reported on as a challenge for future generations to grapple with. And it has been here. We’re all dealing with it in some capacity, with lower-income folks and communities of color getting hit the hardest. Our climate is transitioning away from the one humans evolved under and entering uncharted territory. While science can tell us what is projected to happen due to this change, it will impact individual communities and people differently. How can a person prepare for this? Asking myself not to worry seems unreasonable. But maybe I can ask myself to use that worry to open up to possibilities I wouldn’t have otherwise considered and turn towards the people who have already been doing the work to make themselves and their communities more resilient to our changing climate.

While it’s true that the earth’s climate has always been changing, the current rate of change is linked to human activity. Particularly, it is linked to the amount of carbon in the atmosphere, which has spiked in recent decades due to our burning of fossil fuels. While there is uncertainty about how exactly this increase in parts per million (ppm) of carbon will pan out in real time, what is certain is that the mean surface temperature of the earth rises with this increase in carbon, which is in turn changing our climate. Humans evolved in a particular climate, and right now that climate is transitioning into something we haven’t experienced before, and which is already wreaking havoc on communities across the globe.

Climate change most directly and severely impacts the people least responsible for causing it. Communities of color and low-income communities are disproportionately impacted by it. The UN has known for a least a decade that climate change would impact the poorest countries the hardest. The already fragile ecosystem of island nations like The Marshall Islands are threatened by the dual crisis of a changing climate and rising oceans, and lawmakers are forced to try to capture the world’s attention by holding cabinet meetings under water like the Maldives did in 2009. Yet it hasn’t been enough. For many of us, the reality of climate change only hits home when we are personally impacted by it. This very active hurricane season has been that wake-up call for many.

I first became aware of climate change during an undergraduate seminar called “the History and Science of Global Warming.”  At the end of the semester one of the professors cried and apologized that her generation left us with this problem. She asked that we please take on the task of figuring out what to do. I was moved by this plea, and motivated by the knowledge I now had. I first tried to convince everyone I knew that action would need be taken immediately if we were going to avoid torching the planet beyond livability. When that didn’t work and instead turned me into the kind of Debbie Downer who slams her pint glass on the bar and says “but you’re not listening to me” while describing feedback loops, I knew I had to try something else.

It’s possible that if I’d had a lot more money or a stable living situation, this anxiety about climate change would have turned me into a doomsday prepper. But because I was not in a position to buy, or even stock a bunker, I turned to books, ideas, and attitudes. This led me to find practices and communities who had already been doing the work of becoming more resilient to a changing environment. Through organizing for the 2014 People’s Climate March I learned that climate change brings intersectionality to life. Confronting my anxiety forced me to look at the ways I benefit from the very system that created this planetary emergency, and to face the ways climate change impacts some more than others. To face this in community meant that I was not being asked to dwell in shame about this, but to be honest with myself about how I exist in relationship to others. To truly grapple with my own situation, I had to take responsibility for the part I play. Climate change is a systemic problem that can touch every aspect of our lives, and because of that we will need to look at its root causes. Trying to do this alone is harrowing. Even articulating a little bit of this to another person can be incredibly liberating.

The resistance to accepting climate change as a reality is not just a resistance to science. It is a resistance to this movement towards justice. If you can accept this as true, it opens up a whole world of activity, perspectives and work you can do to confront climate change in your life. The work of community-building, care-taking, and listening become tools for system change. Seeing the relationships between various kinds of oppression becomes part of the work. In my experience, this work starts with really facing up to what is happening. Of course, there is a balance between staying informed and starting to catastrophize. When I feel myself starting to hoard information in an attempt to prove myself right that the worst case scenarios are coming true, I see this as a red flag to take a break.

When you feel that anxiety rise, bring your mind to the work that’s already being done right now. Instead of worrying about the skills or strengths you don’t have, think about what you’re already doing that works and build from there. Instead of freaking out about how nobody cares, find the people in your community who do and work with them. And instead of looking at the media and wondering why nobody is doing anything, seek out the groups that have always been here, doing the work. You don’t need to reinvent the wheel. Consider your newfound (or recently increasing) anxiety about climate change an invitation to jump in, even if your urge is to seal yourself off. I don’t think it’s realistic not to worry about climate change. But I can ask myself what that worry has to teach me, and see if I can use it as motivation to really face what’s happening so that we can work, together, to meet this crisis however it manifests in our immediate communities.

You can find part two in Caroline’s two-part climate change series — which includes resources for and tools — right here.

Caroline Contillo is a writer, community manager, and meditation teacher who lives in Queens, NY with her wife and an excessive number of books and plants. She tweets about climate justice, meditation practices and pop culture as spacecrone. Her movie/TV reviews can be found at spacecrone.com.

Caroline has written 4 articles for us.