At 4:53 p.m. this afternoon, Eastern Standard Time, I was finally forced to confront the fact that Here Comes Honey Boo-Boo is a thing exists in our world. Mama June and Lauryn “Pumpkin” Thompson, two people who star on the TLC reality show, both come came out as bisexual in an EXCLUSIVE Inside Edition interview that hit the internet bizarrely late on a Friday afternoon, at the end of the weekly pop culture news cycle.

Apparently, Pumpkin — who is the sister of Honey Boo-Boo, and the daughter of Mama June and Sugar Bear — lined up an interview with Inside Edition to come out, and during the interview, she also went ahead and outed her mother.

This is what the video looks like that I would have embedded here if it hadn’t been on autoplay. 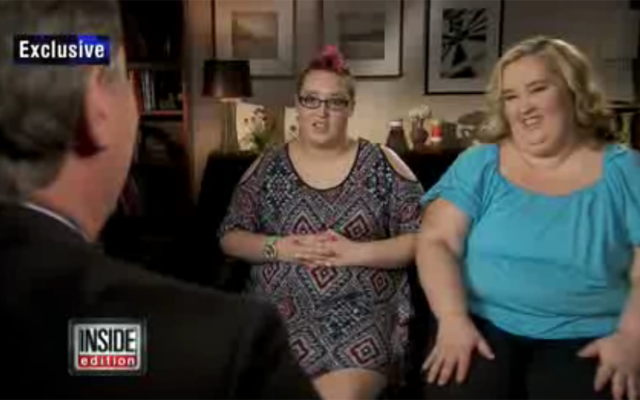 Watch the video here, but be warned: AUTOPLAY.

I’ll just transcribe it for you.

Pumpkin goes on to say, “I’m attracted to females, and I’m attracted to males. You cannot hide who you truly are.” And then there is some discussion about whether or not Mama June played in the big leagues, or kept her bisexuality at a strictly amateur level, the truth of which will, of course, affect her ability to compete in the Queer Olympics.

According to a thing I saw on Tumblr one time, Honey Boo-Boo is an outspoken supporter of gay rights, which is actually pretty dang inspiring. I grew up near the town where this show is (was?) filmed, and the idea of a child being a vocal advocate for queer people in such a backcountry part of Georgia is really humbling to me.

Maybe she will help her mom and sister on the path toward self-acceptance.

Mama June and Pumpkin’s full interview airs tonight on Inside Edition. Hopefully it will be … not-exploitive. If anything substantial happens, we’ll let you know!

Join A+!
Related:here comes honey boo booThis Is A Coming Out Post