If you’re anything like me then when the weather is beautiful you somehow end up ignoring the sunshine in favor of watching films in a dark room with the curtains drawn, a large nest of pillows and duvet and empty chocolate wrappers around you. Last weekend was one of those days when I finally managed to convince my girlfriend, A, to watch a horror film with me. The haggling process went like this:

Me: What if I give you pizza?

A: Okay, you have to buy me pizza.

A: I mean, three pizzas. And you can’t have any.

Eventually I haggled her down to ONE pizza and 2 films that she could make me watch at a later date. She then foolishly decided to lower her price to be ‘One-Unspecified-Future-Favour.’ I think we all know who won that one.

So we settled down for a lazy Sunday afternoon of The Haunting. I figured it wasn’t going to be too bad for her because in between the scary suspense building bits the actors are being hilarious in the way that people in old movies (and small children) always are without realizing. 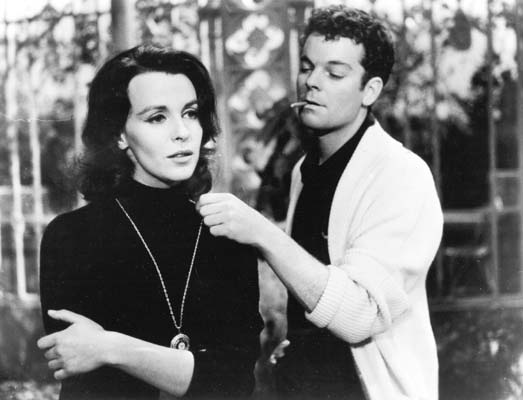 Based on a book written by Shirley Jackson, the plot centres around Dr. John Markway, an anthropologist obsessed with the idea of doing some research into a haunted house. He picks ‘Hill House’ and fills us in on a history of deaths and suicides that have occurred there before the events of the film. He manages to convince the current owner to let him and a team of ‘paranormal researchers’ run around the hallways for a few days and make notes. He is not the protagonist though, that honour is bestowed upon one of the women he invites to help him: the very nervous and highly strung Eleanor Lance. They are joined by slightly psychic Theodora (no last name) and very skeptical Luke Sanderson (the heir to the house). Spooky shit goes down, I can highly recommend it as a good gothic suspenseful horror and will attempt to not give you too many spoilers.

I understand there was a Catherine Zeta Jones remake but that they changed a lot about the plot from the original book and added a bunch of CGI, which quite frankly just isn’t needed. Kids today…

Anyway, not long into the film, A started to joke that Theo seems pretty gay. I laughed as we started to notice more and more things to add to our case (you’ve got to have a lot of background info on a character before you can take them to Lesbian Court).

Theo: Oh it’s an old place we’ve furnished ourselves from a lot of stuff we picked up from the junk shops. We both love fixing over old things.

After a while though we stopped thinking we were just reading this film with a gay lens (like I can’t help but do with Kiki’s Delivery Service) and actually looked it up online — where all the facts come from — and there it was. Theo is a lesbian.

The eyebrows. The turban. The dark hair. All classic signs of Lesbian.

Everyone will tell you that I have the worst gaydar (my Jewdar is only slightly better), so much so that I miss a lot of things that seem completely obvious to other people. I like to think it’s because I’m super enlightened and don’t factor assumptions about people’s sexuality into how I feel about them. I am above clichés and stereotypes and am a better person than all of you because of it.

But it’s probably more likely to be because we live in a hetronormative world and I assume everything is straight (white/rich/etc) until it tells me otherwise. Apparently liking Joan Armatrading is one of those things, and Fried Green Tomatoes, and the technical props manager at uni who used to have conversations with me about how Cyndi Lauper was much better than, and should have become more successful than, Madonna.

A is very smug that she noticed the gay before me.

When I first watched The Haunting, I was a small child so not really thinking too much about that kind of thing. I saw things that I thought just made her an Independent Woman — she’s smart, has some great lines (and great style — lots of black and even *gasp* trousers) — she beats Luke at cards, which his aunt has already said is an impossibility. She isn’t married, or anything like Eleanor (who is financially dependent on her sister and brother in law) and she seems far more confident and perceptive than the other characters — okay maybe the psychic abilities help. Basically Theo kicks ass and I just thought she was there to balance out Eleanor’s drippyness. In horror we’re so used to seeing women as victims or as evil, but Theo is neither.

Here’s what really hits me though. This is a portrayal of an out lesbian in a ’60s film from a book written in the ’50s — and it’s favourable. She’s not shown as predatory. She and Eleanor become good, supportive friends. And although a lot of horrors are written from a moralistic perspective (you do something bad = you get punished in a horrible scary way aka teenagers having premarital sex) — there is no moral judgement placed on Theo — she doesn’t die. The house doesn’t punish her for her sexuality.

There is a scene where Eleanor accuses Theo of being “unnatural” and it’s such a hard scene to decipher — is she talking about her psychic abilities? Or is she referring to Theo’s sexuality? They leave it deliberately ambiguous.

But really none of the characters ever treat Theo as lesser or Other. They don’t ask her invasive questions like which one of them wears the 1960s strap-on (did they have them then?) or make her explain herself. She is never presented as ‘wrong’ or ‘bad’, only occasionally bitchy, but in the best way.

So it made me wonder how many other queer characters are hidden in horror and how well they’re being treated by the genre. Are they all being hacked to death in the name of Christian values? Or are they all fighting ghosts to ’80s theme music? Are we even there at all? We were in the ’60s — who knew? Probably everyone but me.

Hattie has written 1 article for us.