Welcome to Autostraddle’s ongoing series, Makin’ Babies, where real queer parents tell you all about how they created their precious little weirdos! While every new life is created in essentially the same way — egg meets sperm, makes baby — every queer conception story is truly unique. We’ll be sharing a wide variety of experiences here, so get ready to laugh, flinch, cry, high five, and be amazed. Let’s meet some brand new people! 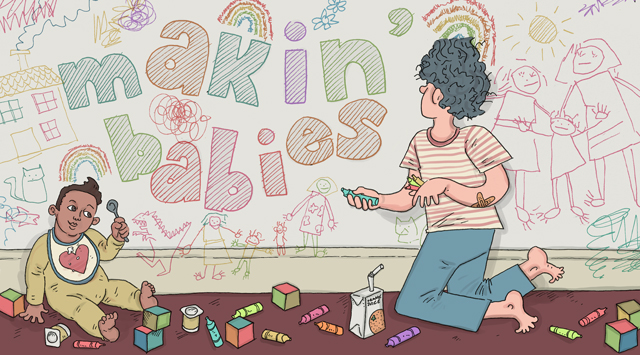 “We haven’t figured any of this out yet,” I told my partner Kellie.

We were barreling along the highway towards Walla Walla, traveling in the shadow of giant outcroppings, while the Columbia River stretched below us. Our three-year-old son slept in the backseat. We were only fifty miles from the home of our sperm donor and his family, and we were trying to decide — before we arrived — if we wanted to conceive a second child.

“If we think too hard, we’ll never do it,” Kellie said. She was right. A cost-benefit analysis would yield no practical reason to grow our family. The only reason to make a new baby was that we felt like it, and we could.

Originally, we’d planned this trip as nothing more than a friendly visit to our donor family. Zac and his wife Erin had a son who was also three. Our boys were too young to understand their biological connection, but when we got them together they played like cousins, splashing each other in an old metal washbasin, and chasing each other naked around the yard while the rest of us shared beers and took in the sun.

We hadn’t visited since last summer. It was spring now, and we were ready for a break from the Olympia rain. But also, we’d just learned that Erin was pregnant with their second child. Their news came with an offer: did we want to try for another as well?

Up until now, I had never dreamed it possible that two lesbians could make a baby on a whim. 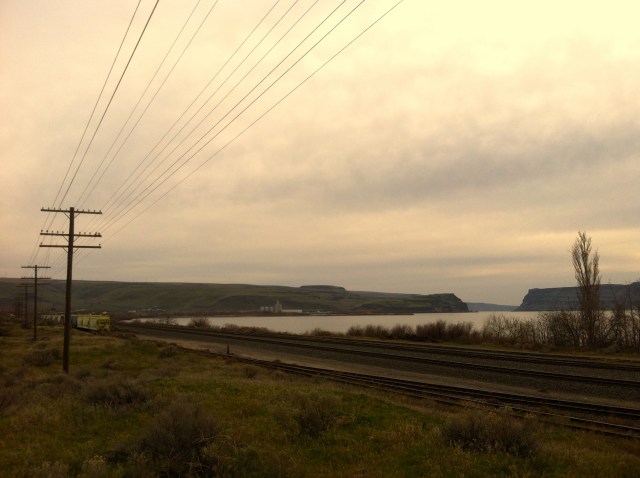 I had entered adulthood knowing that I was queer and also knowing that I wanted a child. I understood that getting pregnant would require some money, and some sourcing of anonymous sperm. This struck me as a small obstacle, a hurdle I might easily clear. But I hadn’t anticipated the months I would spend in weekly debates with my partner trying to convince her to have kids.

Nearly all of our arguments took place where straight couples would normally conceive a child: in the bed we shared. We’d wake on a Sunday morning and drink coffee together while propped against pillows, a ritual we had observed since our relationship began. Years earlier, when we were newly in love, we required no entertainment but each other. We talked, we sipped, we looked out the window, we made love. Over time, once the novelty of waking up together had faded, we turned our attention to books. In this era, I might laugh at something I read, and Kellie would ask me “What?” and I would read to her for a spell.

But increasingly, we did none of these things. Every Sunday morning, after the first sip of coffee, I’d raise the topic we’d been avoiding all week. “Any new thoughts?” I’d ask, as if by some miracle she might have decided she was ready to be a parent, but forgot to mention it during bustle of the workweek.

“Not really,” was her typical response, and I would reply by recycling all my arguments. I was convinced that any child we conceived would be angelic, the sweet-tempered composite of any child I’d ever loved; Kellie thought it likely that we would have a monster, a sociopath, a screamer who tortured animals and refused to eat vegetables.

“What’s wrong with us the way we are?” Kellie asked me all the time. She felt betrayed that I needed to change us, that my desire for motherhood competed with my loyalty to her.

There was nothing wrong with the way that we were, nothing wrong with Sunday coffee, except that I had grown bored of it. I wanted to trade in my coffee for fetal kicks, for newborn squeals, for small bodies climbing into bed between us. I wanted to lose the privilege of quiet Sunday coffee for a while, so that I might enjoy it anew ten years later, both of us softened by age.

“If we were straight, we’d have three kids already,” she admitted.

I knew that Kellie was right. If we could conceive children the way most straight couples did, Kellie would have the same fears, but they would be easily overcome. We’d be one of those couples who, through recklessness rather than decision, got pregnant early on. For us it might have happened on one of those Sunday mornings in the early years of our courtship.

What’s more, I understood that the fears themselves connected to the fact of our biology. Since I would carry the child, our baby would share my DNA but not hers. Her fear of a monster child was a stand-in for another, truer fear: that she might not love whatever child I bore.

During those months, I began to notice them everywhere: the young by-accident mothers. There was my friend’s housemate whose boyfriend wore leather pants. The way they clung to each other, no one was surprised when she started to show. There was the student in the class I taught with straight red hair and cat-eye glasses, one hand always on her belly. And there was an endless stream of them at the café I frequented, long-haired women who wore skirts with boots and toted clear-eyed babies around in slings.

They were all in their twenties and gorgeous. Perhaps behind closed doors they nursed fears and regrets, but in public they smiled. I wanted to shrink them with my eyes, and then squash them like ants.

In all of my adult life, I had never once wished I was straight, but I found myself pining for the advantage that heterosexuality offered. It seemed that straight people didn’t need to be certain. To them, babies were often apparently a thing that just happened.

It took nearly two years of discussions, two years of arguing, of cajoling, of pretending we might break up, before we agreed that Kellie’s certainty was impossible, but that we would make a child in spite of this. Together we selected an anonymous donor, and purchased a dozen vials of sperm.

Twelve months later we were still childless, and my jealousy had spread to include anyone with children. When friends announced they were pregnant, I offered a hollow “Congratulations.” I could not get my voice to sound anything but somber.

So far, our journey towards parenthood had been a relentless upward trek. Our efforts had cost us in money, time, and joy. The story finally shifted when Erin and Zac, introduced by a friend, entered our lives. Without hesitation, they offered the very thing we needed: sperm, for free, every month. This blessing from the straight world was powerful medicine. Five months later I was pregnant.

As my own belly grew, as the baby took shape, I walked down the street with one hand on my belly. I nodded at all the young mothers. I didn’t hate them after all.

On the afternoon that our first son was born, I lay on the hospital bed waiting to greet him. Kellie was holding him already, trying to offer him comfort as the nurses cleaned him and cut his cord. As she handed him to me, she leaned in and whispered, “He’s really cute,” surprise and wonder in her voice, and in that moment I knew that we were in the clear. 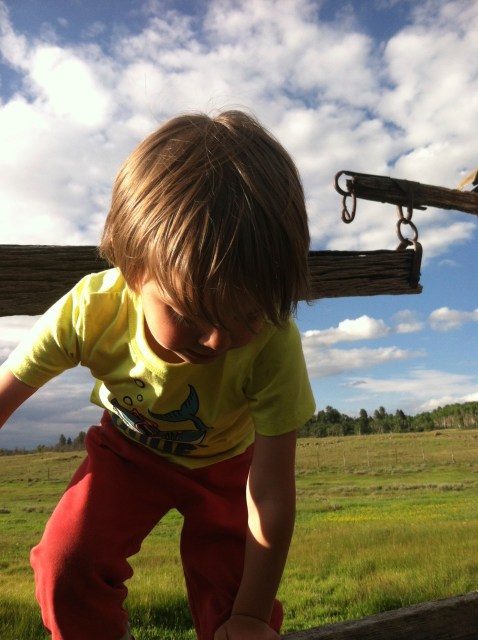 It was Kellie who insisted on a second child.

Some months earlier, while I was traveling, she had told me on the phone, “I think we should start trying as soon as you come home.” I hadn’t said no, but I had put her off until now. I had only just begun to recover from the sleep I’d lost in my first years as a parent, and to enjoy my free time, which was returning in bits and pieces. But when Erin offered the chance for another child, I was excited by the prospect of a pregnancy that wasn’t fraught with the weight of years of planning.

That weekend in Walla Walla, we stayed in a hotel one mile from Erin and Zac, in a dark room with two beds, thick drapes and old carpets. It overlooked the parking lot, a soda machine, and a tiny pool. Kellie woke just after six and left the motel in search of coffee; I took over her warm spot and went back to sleep. When she returned forty minutes later she carried more than coffee. “I got a text while I was out,” she explained.

After ten minutes outside the body, sperm begin to die. We turned the television on to distract our son, and headed into the bathroom, beige and bright and windowless. Commercials for new toys and sugared cereals blared in the background.

Every time we had tried to conceive our first son, I’d felt a flutter of hope followed by the fear of another failure. But this time, lying on the bathroom floor, I was surprised by the feeling that surfaced: ambivalence. I considered telling Kellie that I needed more time. But she’d already loaded the semen into the needleless syringe, and stopping her just wasn’t in me. Our family was heading towards four.

I took a pregnancy test only ten days later, left the test on the back of the toilet, and turned over an egg timer. A friend knocked on our door before the sand had run out. I greeted her and chatted for a minute before excusing myself to check on the test. When I returned, I made us tea and pretended all was normal. In a way, it was. It was my second pregnancy, but this time I had become something I had never dreamed possible: a lesbian who’d managed to get pregnant on a whim.

It struck me that of the gifts that Erin and Zac had offered us, this one was substantial. They’d given Kellie and me the luxury of conceiving in the midst of ambivalence without endless deliberation. I found, and continued to find a joyous sense of abundance in this: that I was able to make a baby without having to feel desperate for him first.

Jennifer Berney is a queer mama, writer, teacher, and believer in the beauty of imperfection. Her essays have appeared in Brain, Child, Brevity, Nailed, and Mutha Magazine, among other places. She is working on a memoir about her quest to build a family out of donor sperm, mason jars, and needleless syringes. She lives in Olympia, Washington, and blogs at goodnightalready.com. You can find her on Twitter.

Jennifer has written 1 article for us.