I’ve had a hard time writing about anything other than Donald Trump’s ascent as president-elect. Jeff “Too Racist To Be a Judge” Sessions as Attorney General. Steve “White Nationalists Call Me a White Nationalist” Bannon as Chief Strategy Advisor. Death Eaters in all these cabinet positions and not one of them with the relevant experience to actually hold said positions. Lordie Lou with a cherry on top, it’s all so bad. And I can’t look away. I’ve been donating money where I can (though I work three jobs and wife is still a law student, so it’s not much). I’ve been filling out petitions. Protesting where and when I can. Hell, my wife and I panic adopted a dog and named her Edith Windsor. But I have not yet written successfully, I don’t think, about anything other than this nightmare timeline we seem to have dropped into. I can’t even dream about anything else. Last night I even had a D&D-inspired dream wherein my gaming group physically battled a giant sea squid who was our real-life President-Elect Tom Riddle. I don’t know if we won or not, I woke myself up just as I cast chain lightning.

In short, it’s been really hard to write a liquor column. I’ve had to sit down and think about why this matters. Why should I still give you a recipe for December when I can barely get out of bed and do my three jobs? I can only assume you’re having the same difficulties. And then I thought back to the day Hillary conceded. A group of us, dissatisfied with a protest option that blamed the Democratic party for this country’s hate of women, gays and anyone who’s not white, gathered in my apartment to console each other and to make plans. Plans to attend other protests, plans to donate money, plans to take care of each other. My wife made them soup. I baked a cake. People brought wine and beer and whatever they could and we just sat at my dining room table and made sure we were okay as we planned the next phase of our life, a phase many of us hadn’t ever considered.

What I should have done that night is mixed a drink. Made a punch. Something. Something that both honored the great history of queers partying loud and proud through the bad times and that nodded to the way I feel about drinking as a queer person. Mixing drinks, tasting liquor: these are the ways I perform luxury in a society that tells me I must be my most marginalized self at all times, that tells me at all turns that I don’t deserve or will never have a little luxury. It’s certainly not the only way to do it; I’m not at all saying that, and there are plenty of sober queers who make their own way. But this is my way. The way I perform luxury and the way I give it to the people who enter my house, sit at my table. And because we’re about to have a Vice President who thinks that if you shock me enough, I’ll turn straight and that that’s the most desirable outcome, bring on the luxury. Bring on the dignity of the apartment cocktail party. I’ll be a classy, dandy, HAPPY queer. Bring on my community, coming through my doors, and as long as I have the resources to do it, I will serve them.

One of the things we talked about that night was which of us could successfully run for office. I think I write too much about vaginas on the internet to successfully mount a campaign, but I’ve DEFINITELY had a few drinks and pestered Carmen about it. For that is what I do when I have two glasses of wine as of late: I fill out the She Should Run form the same way people tipsy text their friends to tell them how much they’re loved. I love government. Like I love government a Leslie Knope amount. But I think the best I can do is support Emily’s List and light a fire in your belly. Have you thought about running for office? It’s okay if it’s not in the cards, but next time you have your queer collective over to make sure everyone has what they need before Tom Riddle’s inauguration, may this light the sort of fire you need. Whatever it may be.

Perfect for queers running for office, planning protests, getting their names changed and making sure their passport is up-to-date. 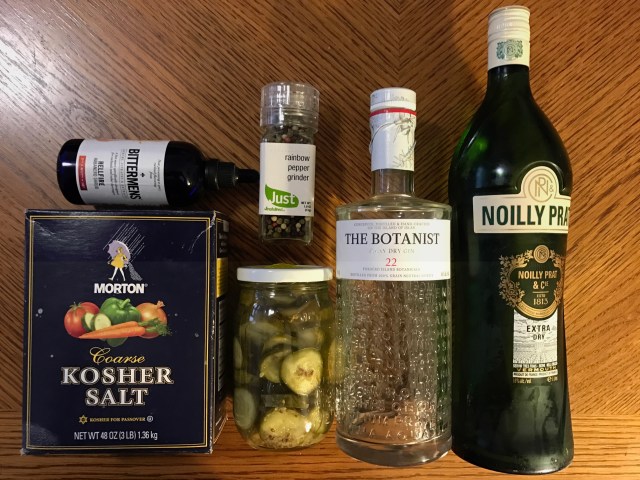 salt and pepper to rim

one spicy pickle to garnish (I’m using habanera dill pickles sold by the wonderful Amish man at our farmers’ market, which I also like to eat out of the jar with a fork NO BIG DEAL)

a mixing glass or the bottom half of a shaker

a martini glass or similar 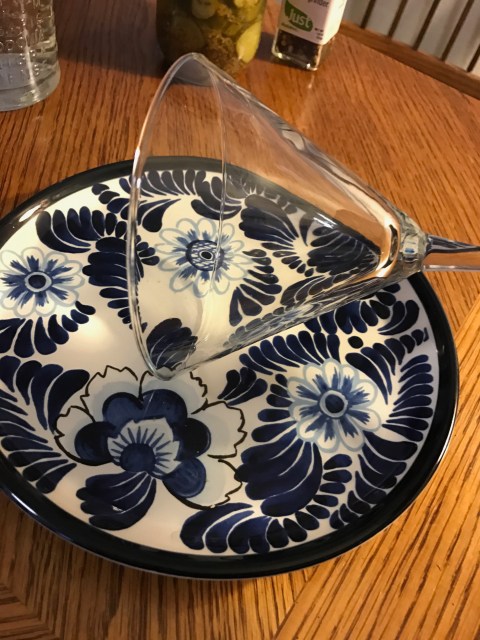 First we’re going to start with the rim on the martini glass! Grab two saucers or salad plates or what have you. Fill one with water (and if you’re feeling adventurous, a dash of spicy pickle juice) and one with salt and a bit of pepper. Tilt the martini glass at a 45 degree-ish angle to the water, place the rim of the glass juuuussssst in that water and turn the glass gently to moisten the rim. Now tilt the glass the same way to the salt and pepper and repeat. You’ll see the glass pick up the salt and pepper on the outside of the rim only—that’s why we do it this way, instead of dunking the rim of the glass in liquid and then dunking it in salt. If you get salt on the inside of the glass, it’ll dissolve into the drink and throw the balance off. The nice part about this is it’s the first step—if you’re not happy with the rim, you can wash the glass, dry it, and begin again. Nothing is melting or getting warm or waiting for you. Take your time. Channel your anger into rimming a glass. 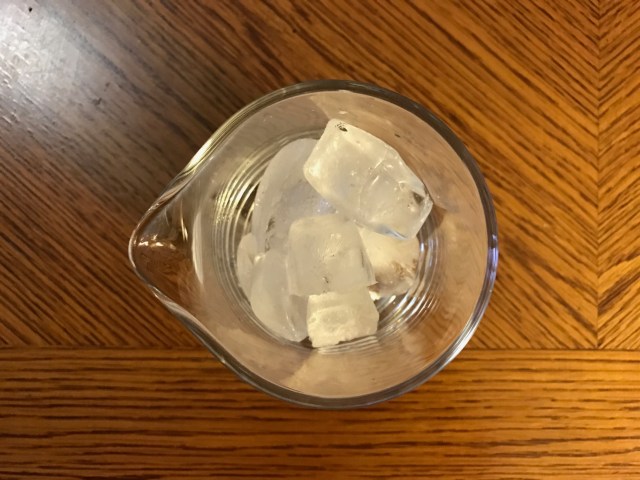 Once it’s ready, fill a mixing glass halfway with ice. Dump in the gin, the vermouth and the hellfire bitters. Give the martini a stir, trying not to bang the ice around. Try to insert your spoon between the ice and the glass and get a fast-but-quiet whirlwind going, much like the surge of women running for office in the next four years. 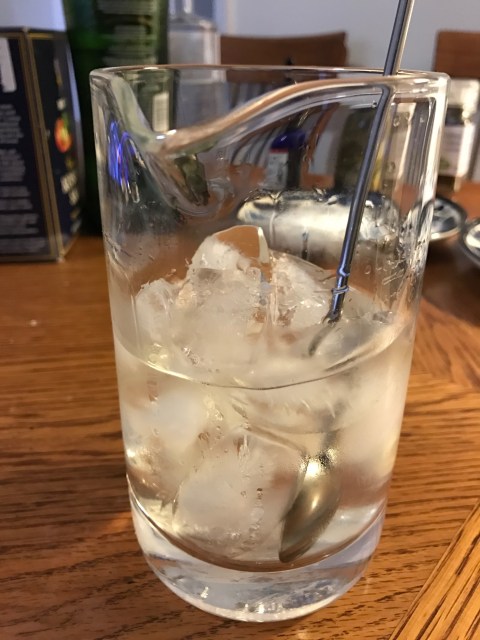 Oh who am I kidding, I hope our lady candidates are much louder than your mixing is going to be.

Strain your Fortitude Martini into your rimmed glass. 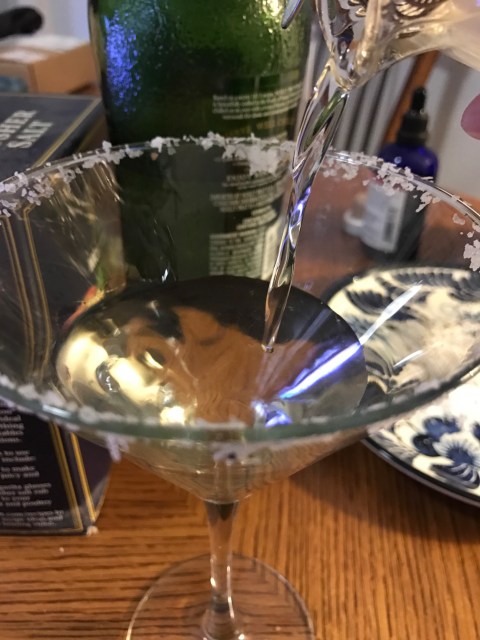 Spear a pickle slice with a toothpick and pop it on in there. 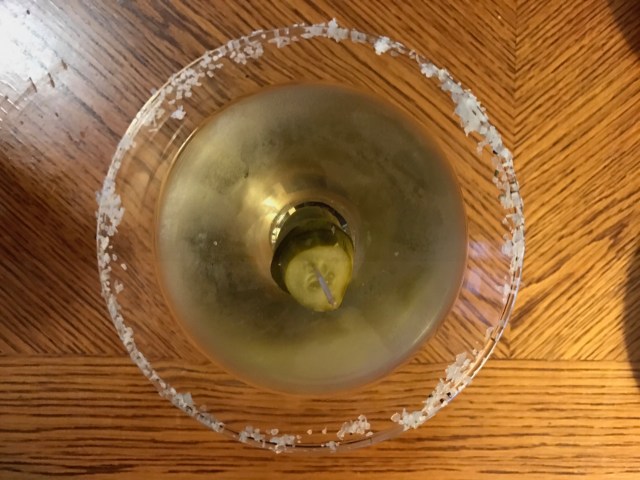 Rachel Maddow says to never eat the garnish, but we are hungry. Oh, we. Are. Hungry. 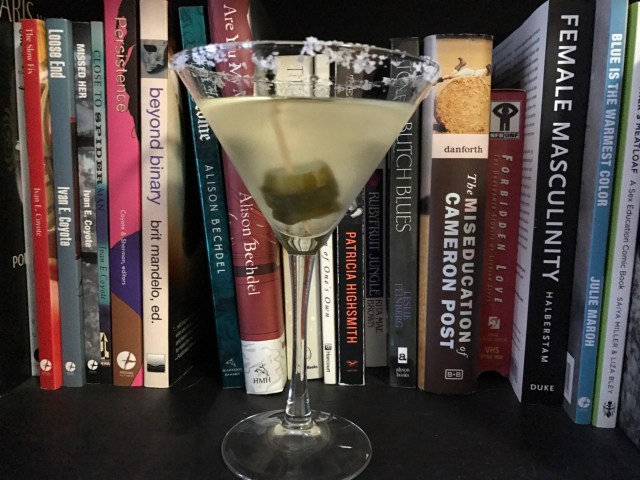