I don’t know if you know this about me, but my superpower strength is Getting Ready For Work In Under Ten Minutes. It might seem crazy, but I promise it’s true. In fact, today I slept through my alarm and woke up at 9:15 in a panic (I’m supposed to be at work by 9am, and I live 45 minutes away from my office) but by 9:23 I was out the door and rushing to the subway. I was fully clothed, I had breakfast and lunch in my bag, and I even remembered to wear my spiffy new iPhone touch gloves. My secret? I shower at night, I don’t brush my hair, and…wait for it…I don’t wear makeup.

Not wearing makeup isn’t a thing I do for feminism. It’s not something I’m particularly proud of, but I’m not ashamed of it either. I feel completely neutral about not wearing makeup. I have lots of feelings about the way makeup functions in the world and the expectations that are connected to it, but I have no interest in talking about an individual’s personal choice when it comes to makeup because I don’t think it’s a useful conversation. I would never tell you whether you should wear makeup or not, or how you should feel about that choice, whatever it may be. And luckily, I totally don’t have to, because on Wednesday the New York Times decided to take on that task for me! Whew, lucky us. 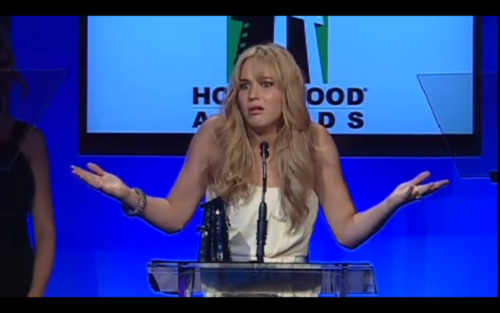 Jennifer Lawrence doesn’t know why the NYT decided to frame the debate the way they did and neither do I.

Earlier this week the illustrious New York Times, beacon of hard news and weirdly-contrived fake trend pieces, decided there’s “Room for Debate” when it comes to women and makeup. What encouraged this brave foray into the super new and not-at-all tired debate about women and their looks and how we all choose to exist in our bodies? The NYT feels that while “some would argue that makeup empowers women, others would say it’s holding them back from true equality.” While questioning the validity and complexity of the relationship between women and makeup could have been interesting, the way they chose to frame the debate completely missed the mark:

A recent survey seems to come down on the side of makeup — at least superficially — saying that wearing makeup increases a woman’s likability and competence in the workplace. If makeup has indeed become the status quo in the public realm, does it ultimately damage a woman’s self-esteem, or elevate it?

In other words, the conversation is totally fucked from the get go. I really think if someone were to stage a debate about the idea of makeup as the status quo as a reality – What kind of makeup are we talking about? Why do we live in a world that demands we look “natural” but insists that to achieve the natural look we must heap on products? Who benefits from makeup being “the status quo” and who suffers real consequences? – the conversation could yield interesting, useful answers. I mean obviously we could just blame the patriarchy (#BOTP forever and ever amen) but I’m genuinely interested in having a deeper and more nuanced conversation about this issue. But! That’s not what the NYT wants to do. It wants us to blindly accept this statement as fact and get to the real question: Since we’re all stuck in this world where makeup is a necessity, how are we lady folk coping? I call bullshit. 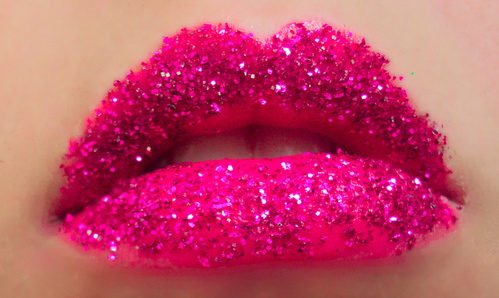 I’m just going to illustrate this article with photos of gorgeous lipstick because the other option is photos of me rolling my eyes and this seems preferable.

There are seven essays in total, and while one of them spoke to me a little bit, on the whole I just couldn’t take them seriously because as I mentioned, they were missing the point. I’m not trying to personally offend anyone when I talk about the beauty industry and the ways in which marketing makeup to women can be problematic. I don’t care that Thomas Matlack, who is apparently the “go to guy” whenever the mainstream media needs a Sensitive Male Perspective thinks his wife is beautiful with or without makeup. There was no nuance in the essays, no surprises. It felt like a group of people had been selected and had been told to say very specific things, and they stuck to the script. The one truly bizarre moment appears when makeup artist Scott Barnes – who is obviously going to come down in support of makeup making us all feel fab, because its his livelihood, and that’s all well and good – writes: “A woman applying makeup is sort of like a man donning armor to prepare himself for battle. Makeup gives you confidence…and confidence is a good thing to have on the battlefield.” Sure, okay, confidence is great to have on the battlefield, but you know what’s even better? Actual armor! Like the kind the men in this hypothetical yet super-literal take on the “gender wars” battlefield situation are gonna get. But nope, the men are gonna get the armor and the women are gonna get the lipstick and we’re all gonna feel soooo confident and it’s gonna be great, really! Equality rocks, amirite?!

Over at Jezebel, Jenna Sauers (a former model who initially contributed to Jezebel anonymously “from the trenches” and now contributes regularly under her real name) presents an interesting take-down of the debate, questioning the framing of the essays and suggesting that there is no choice.

As a kind of thought experiment, sure, I can imagine there are women who wear makeup truly and only “for themselves,” who would continue to do so even absent any the miasma of social programming and cultural pressure to wear makeup, subtle and not-so-subtle, that women face in mainstream contemporary western culture. Maybe there are women who truly indeed wear makeup “for themselves,” such that if our culture happened to transform overnight into one where the wearing of makeup by women was stigmatized, they’d continue to do it. Because it’s their choice! It’s just that I don’t think I’ve ever met any of these women.

Now the thing is, while I do agree with Jenna on some of her points – I hate when we talk about “choices” as though they exist in a vacuum, I hate pitting women against one another à la “the mommy wars” and I hate when people act like there is One Right Way To Do A Thing, especially if it involves The Idea Of Feminism – I read this paragraph and shook my head. I disagree. Because I have met these women. They exist. They’re queer. 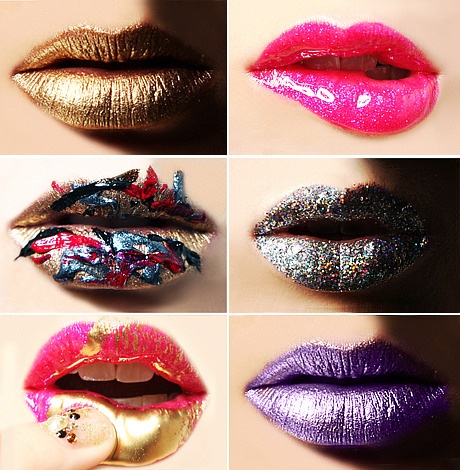 I feel like all the femmes I know could rock these lipsticks so hard.

To argue that no woman ever would wear makeup “for herself” is to suggest that we are so deeply entrenched in a world that objectifies women and encourages us to make ourselves into objects of desire that even if we believe we’re acting independently, we’re actually just doing what the system wants us to do (hello, hegemony!). The thing is, the act of being queer is already subverting the system. If one refuses to give in to the idea that we must be pretty, we must be available for consumption, we must be pleasing to look at (implicitly implied: in the eyes of cis dudes), then the act of putting on makeup can possibly be reclaimed. I want to be careful here because I don’t want to imply that a heterosexual woman is not capable of this because of course she might be. But a queer woman effortlessly does this and so the act of putting on makeup – when the intent is explicitly not to attract the attention of a man – can suddenly and easily become radical. 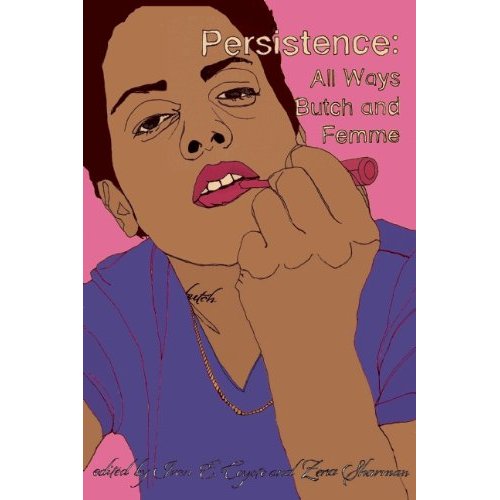 Butches and femmes: Queering makeup since approximately forever ago.

Queers take on radical approaches to makeup in many other ways, too. Some of us radically reject it. Some of us radically embrace it. A masculine of center woman refusing to wear eyeliner is just as radical as a femme woman wearing a full face of makeup, complete with bright red lips and fake eyelashes. Absolutely any interaction with makeup is radical when we use it in ways that don’t fit with how society believes our gender should behave. When a feminine gay man wears nail polish, when my masculine of center girlfriend paints one nail pink, when we do things we are told we should not do – and yes, we do these things for ourselves – that’s radical. Makeup isn’t the enemy. Queers have done a great job proving that makeup really can help us – and everyone else! – take what’s on the inside and articulate it on the outside. And wouldn’t that be an interesting conversation to have? How queers and straight people and everyone in the world can utilize makeup in a way that is safe and fun and personal? 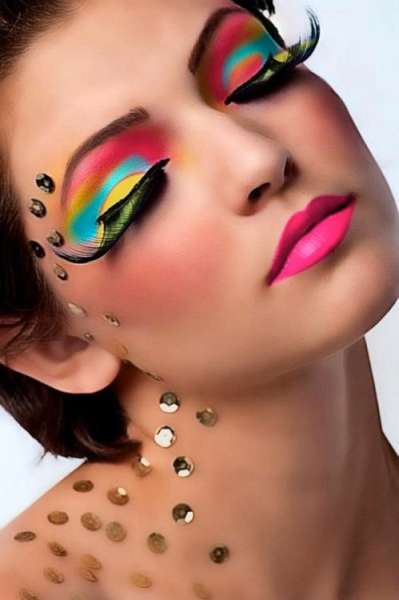 If I absolutely had to wear makeup to work I would probably want it to look something like this, to be honest.

I hope you’ll tell me how you feel about makeup. I want to know about your take on the social implications surrounding it, the queer ways in which we can reclaim it and all your other feelings in the comments. Just because the New York Times failed to have an interesting conversation about women wearing makeup doesn’t mean there isn’t one to be had. Maybe we can have it.