In the pocket mansion, Zari wants to start her new project by cleaning the refrigerator, but she quickly learns it’s been spelled to product a bottle of whiskey over and over again. This trips her mind out a little as she starts to think about the Waverider and the timeline and things get a little timey wimey in her high brain. 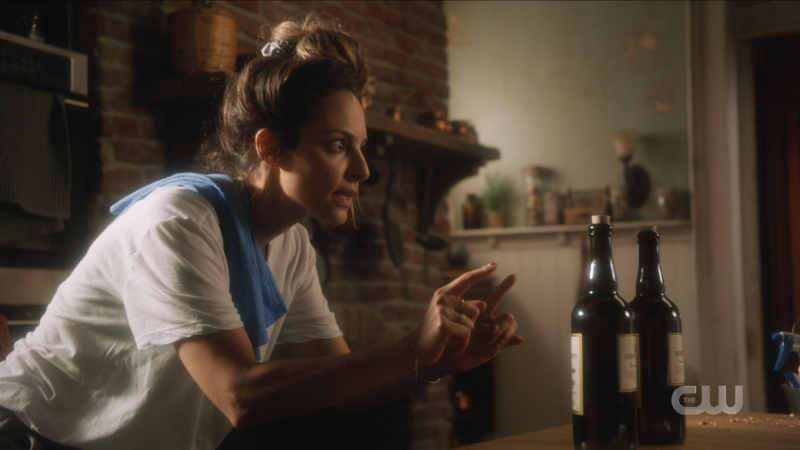 This is me drunk at 3am suddenly sure I have the best idea for a story ever only to wake up and realize it’s garbage.

Spooner is trying to decide if they should go after the rest of the Legends, but Astra points out that they are a Black lady, a brown lady, and a technically-a-computer lady; not exactly your standard 20s fare. Besides, Gideon still isn’t talking, she’s just making more apple dolls and putting them in a box. She made six apples, which is how many Legends are with the train portion of the party, so it’s concerning when Gideon then stomps those apples into applesauce. 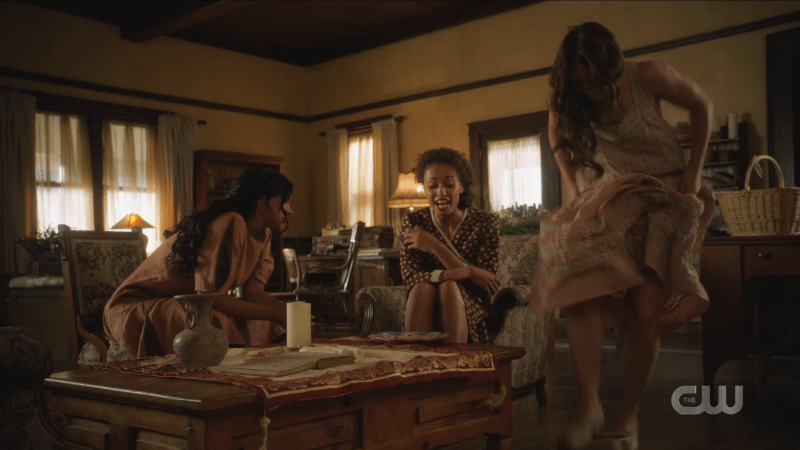 What’s funny to me and probably me only is that “applesauce” is 20s slang for malarkey.

Astra snaps at Gideon, wishing out loud she would just plug herself back in so she can be THEIR Gideon again, and Gideon slinks away sadly. Spooner asks what Astra’s actual problem with Gideon is, and Astra admits that it’s just a reminder that her spell didn’t work the way she wanted it to. She feels useless. Spooner gets it; without her alien powers, and without any aliens chasing them down, she’s not sure what she brings to the team now. While wallowing in their self-pity and collective feeling of uselessness, they realize Gideon has wandered off. They find her at the fuse box, taking Astra’s advice too literally and zapping herself with wires. 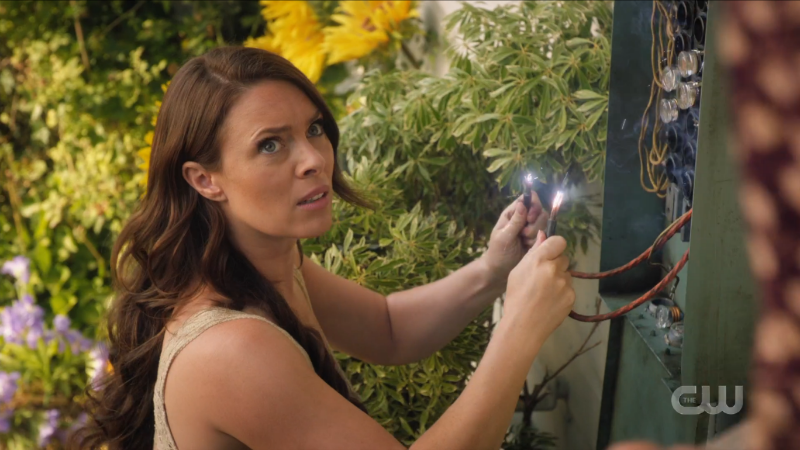 They realize that Gideon understood Astra, and Astra suddenly feels extra bad about snapping at her.

In the mansion, Ava finds Zari looking more alert but less sane, as she’s sitting in the middle of dozens of bottles adorned with post-its, and she’s talking about how they need to pivot their thinking from HOW the Waverider got blown up and start trying to figure out WHO blew them up. 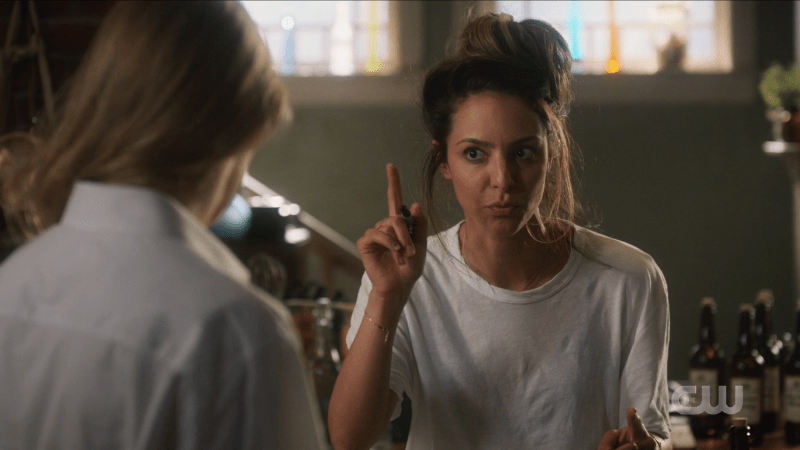 One of the bottles said Lex Luthor and I swear to Beebo if that cancer of a character comes to this show I’m rioting.

Zari has a list of suspects, and offers to show it to Ava, which frankly is too close to flirting when it comes to Ava to say to her on her honeymoon! But Ava is excited to see the list.

On the train, Nate needs a confession from the conductor, and Behrad gives him a pep talk before he goes in to remember who he is; he killed a man, but he’s not a killer. He’s pretending to be Hoover, but he’s not a bad guy. And at first it seems like the advice bounced off his steel skull but when he gets inside, he just fakes smashing things over the conductor’s head and actually talks to him much more reasonably. And that’s how he found out the conductor wasn’t going to kidnap him, the FBI agents were; they’re a fake. And they’re taking him to Al Capone.

A bunch of gangsters are lined up outside the train and Nate decides to face his consequences. But when he steps off the train, the potion wears off, and he’s just a regular joe schmoe standing in front of a man, asking him to shoot him.

In the pocket dimension, Ava and Zari are making some progress, labeling the bottles with the names of all their past enemies, and even some allies. There’s one bottle that they hold onto, wondering if it’s even worth considering as an option, when they’re interrupted by Behrad’s voice floating through the keyhole, where Sara joins them. 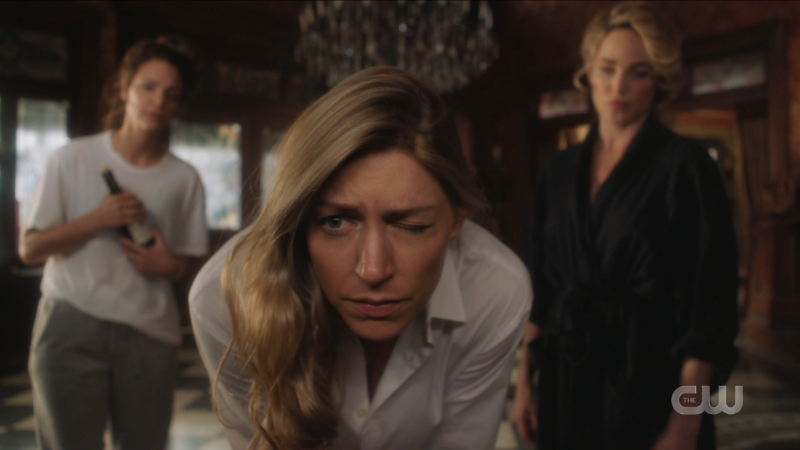 This shot was so fun it made me look up the director and I was delighted to learn it was a woman: Alexandra La Roche

Behrad apologizes for interrupting the honeymoon, but the truth is, the Legends are no good without their captains, and they’ve found themselves in a bit of a pickle. They promise to come help and Zari points out that all they have are weed gummies and booze, but Sara can work with that.

While Nate is confessing to the murder of J. Edgar Hoover and giving the gangsters a pep talk about deep breaths and self-love, the Bullet Blondes show up, booze in hand. 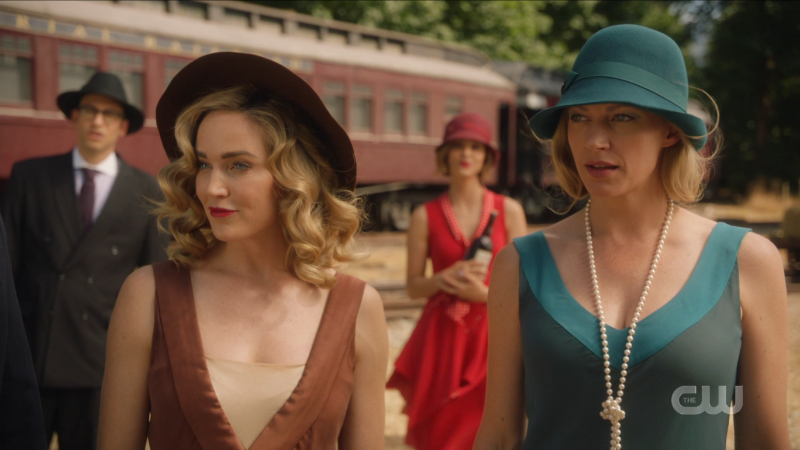 Gotta love it when the team needs their queer captains to save the day.

This is enough to make a gangster’s day and things seem to be calming down…until Hoover shows up. Zari’s timeline theories start whizzing around her head, but when the fight is over, it’s clear this isn’t the real Hoover. He’s too good a fighter. Sara smashes a bottle over his head, and they discover that he’s not the real Hoover, or even a real hooman. He happens to be the very thing that was on the post-it that was on the bottle that killed him: a robot.

The robot starts a self-destruct sequence so they all get the hell out of dodge, and fast. 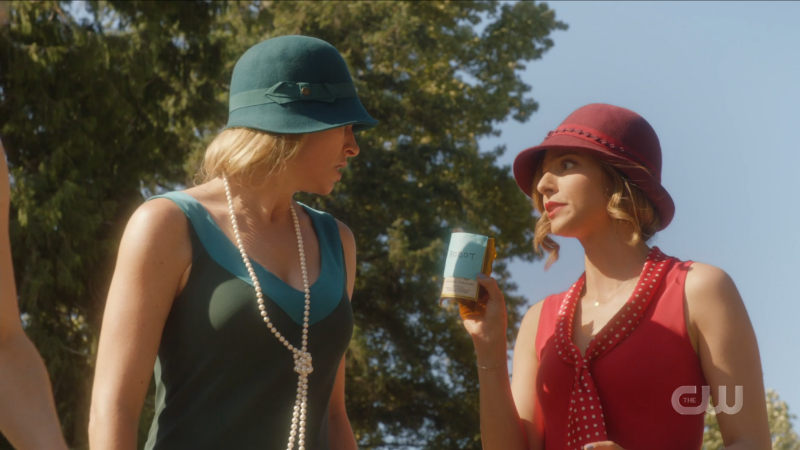 Ava and Fancy Zari’s friendship is very important to me.

In Odessa, Gideon starts to wake up and is startled when she sees Astra there. But Astra isn’t here to scold her this time, she’s here to apologize, and to try to help her communicate by handing her a pen and paper. While they work on that, Spooner laments to her mom that she wishes there was more she could do. Gloria points out that Spooner didn’t talk until she was six, but they managed to communicate alright, and Spooner doesn’t even remember not knowing how to talk, so something occurs to her. 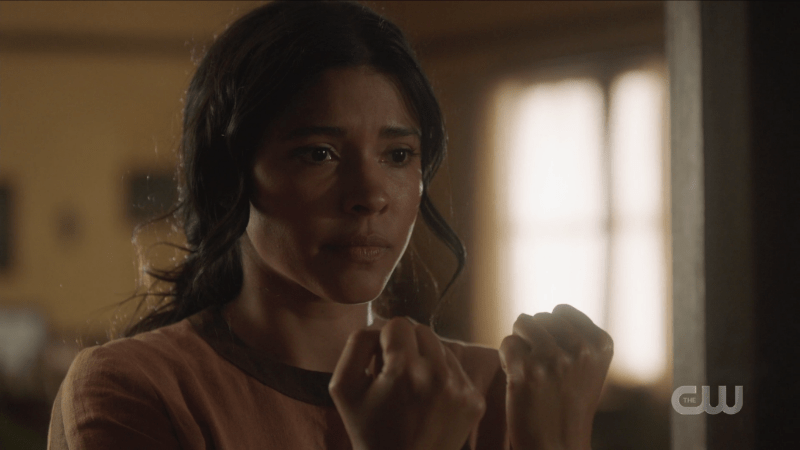 We might need to get Spooner some Theo Crain gloves soon.

She heads to the bed and sits down with Astra and Gideon, and reassures all three of them by way of the former-AI that she’s not useless, just figuring things out. She puts her hands out and gently touches Gideon, hoping her gift of understanding aliens who couldn’t communicate would extend to Gideon too. 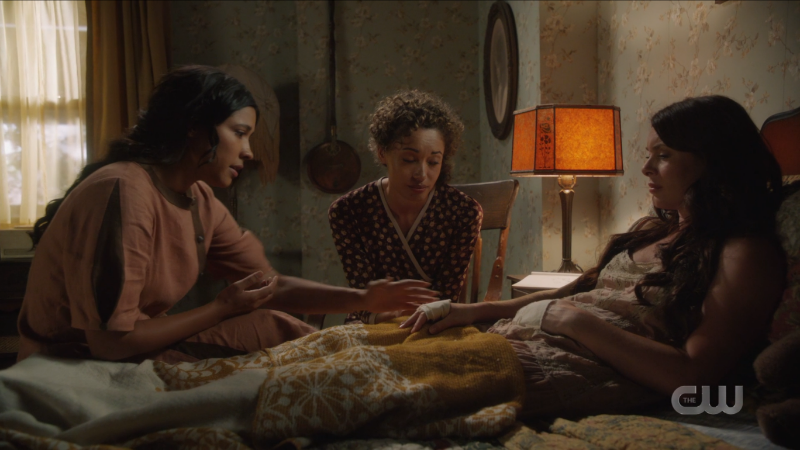 I bet Gideon ships Spatula, too.

And it works! Inside Gideon’s mind Spooner can hear that familiar voice freaking out about not being able to get the Legends to understand her when the stakes are so high. When Spooner translates what she hears (that the Legends have to get to New York by November 7th, 1925, which is two weeks from today), this trigger’s Gideon’s go-to responses, “Precisely, captains.” 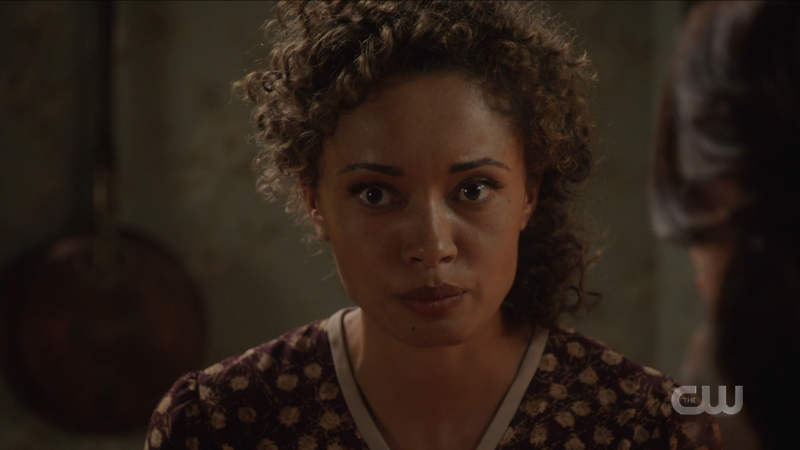 Astra’s journey from “Ugh I guess I’ll stay on the Waverider but I’m NOT a Legend” to “Gotta save the rest of our team, the Legends!” has been a delight.

And that’s a wrap on 702! Next week is the 100th episode, which looks like it will be full of chaos and mayhem and plenty of familiar faces. And I, for one, can’t wait.