Gary finds himself in a gaggle of Avas and he apologizes for eating D Squad; you see, he loves Ava! He loves one Ava in particular, his boss. They’re confused; Avas serve, not lead. But he assures them that they can be whoever they want to be, not just what it says on the box they came in, and they are intrigued by the concept. And I, for one, am here for an Ava uprising. 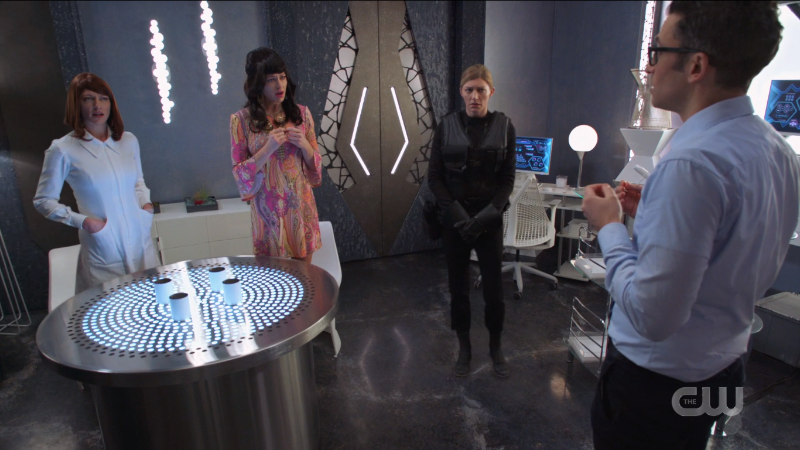 Down on Earth, Zari approaches Constantine about the obvious magic issue he’s having, but with Astra’s help, he gaslights her into thinking everything is fine. 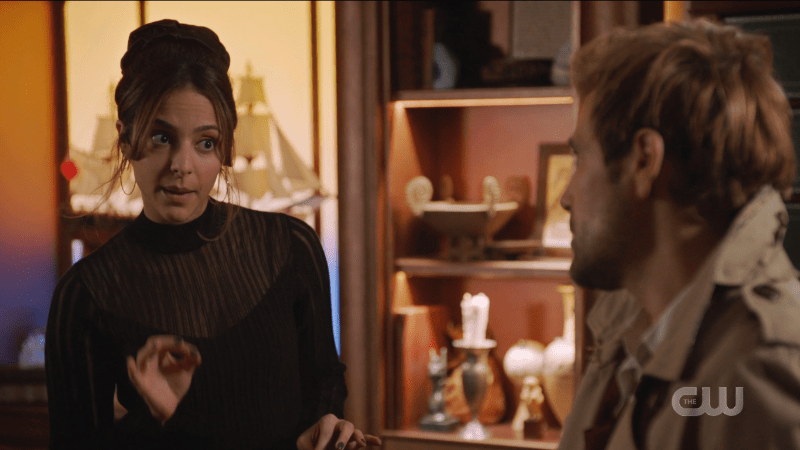 “Listen, I’m already being slowly diminished into just being ‘Constantine’s girlfriend’ the very least you could do is let me in on your little secrets.”

Truly idiotic, if you ask me. And dangerous! The Legends should know they are down a sorcerer! I go back and forth about my feelings about Constantine; generally I find him to be a fun addition to the team when the entire episode isn’t about him, but I’m growing a bit weary of the ol’ chap.

Up in Bishop’s world, Mick is having a hard time breathing as the atmosphere collapses around him but he manages to break free of his restraints and put on the oxygen mask Kayla made fun of him for carrying. That is, until he finds her also struggling to breathe and shares it with her. She accepts his help and claims it’s only because she needs help carrying the fuel cell but it seems Heat Wave is melting her icy exterior.

Sara shows up to Bishop’s dinner invite in a lovely blue dress, still playing along like she has seen the light re: Bishop’s plan for restarting “humanity.” 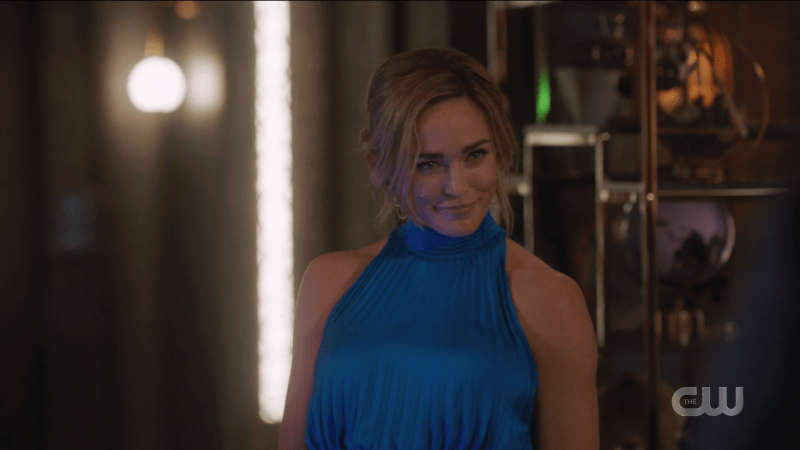 Jury’s still out on if blue is the warmest color, but it’s definitely Sara’s color.

Bishop is so delighted by Sara’s supposed change of opinion that he hardly notices that his Ava isn’t responding to his request for “appies.” When Bishop reveals that he thinks he killed Mick Rory for trying to save Sara, she drops the facade and starts punching him, probably as much for killing Mick as for his obnoxious nickname for appetizers.

Bishop is unfazed; he says he’ll be back even if he kills her, so she punches him without hesitation or remorse.

Outside, the very-much-still-alive Mick Rory and Kayla are taking turns sharing the oxygen mask and discussing how humans suck. Mick agrees ,but he says that Sara is different. Better. And Kayla is moved by this rare show of emotions. 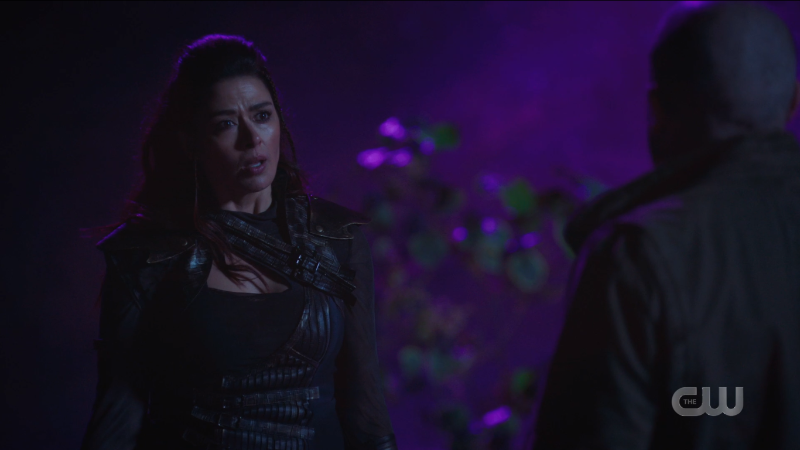 Remember when Aliyah O’Brien made out with Charlotte Sullivan on the reg on Rookie Blue? Good times, good times.

Inside, Bishop comes to as Sara drags his mostly pulverized body down a hall to use it for the scanners to open doors. He is entertained by her lack of understanding about what’s happening as she finds his original Bishop body.

When Kayla and Rory find the ship and get on, they find themselves under siege from some nocturnal aliens and they can’t get the door closed. So they hop into a pod, which gives them the oxygen they need to survive as well as protection from the aliens. Kayla is more shook than Mick has seen her and she admits she’s a little scared; frankly it would be stupid not to be. 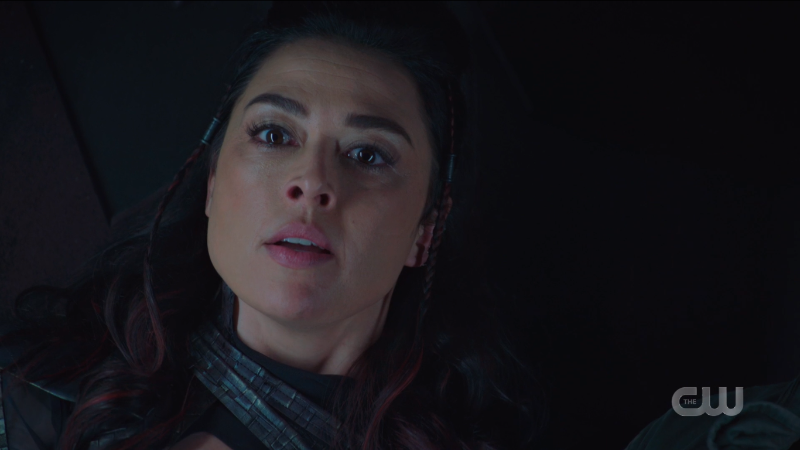 I mean if you have to be trapped in a pod with anyone…Kayla seems like a good choice.

Trapped alone in tight quarters, they do what the fanfic gods require in such situations and Kayla jumps Mick Rory’s bones.

Back at the mansion, Zari catches Spooner glitching a bit but Spooner shrugs it off despite still hearing the alien all to her. She eventually slips away and talks to Alien Amelia in its screechy language. She tells Spooner that she was fused with an alien, says she doesn’t like the light, much like the aliens Kayla and Mick just fought. Amelia says to Spooner, “There’s one inside you as well, that is your fear,” and I imagine Spooner will only hear the first half of that sentence, and not realize that the odd syntax means actually probably Amelia has no idea of Spooner has an alien in her, she can just tell Spooner is afraid of that fact. Amelia says that Sara Lance didn’t fear her and attacks Spooner but Ava and Zari save her. When they pull her off Spooner, they ask what happened to Sara, and Amelia says she killed her, much to Ava’s devastation. 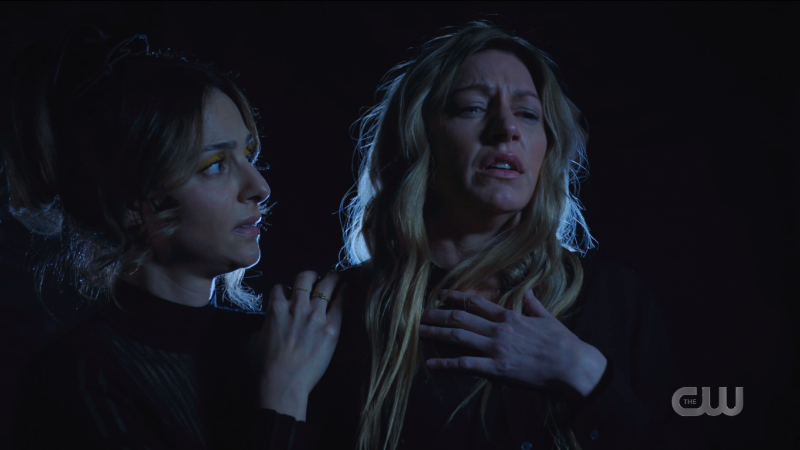 Bishop is still having a hard time getting his Avas to respond to him and Sara tells him once again she doesn’t want to be part of his experiment. Every scar on her body is a memory, and frankly she’s died enough times for one person; she’s already tried the “being reborn” thing and she went feral for a few months. She’s good. 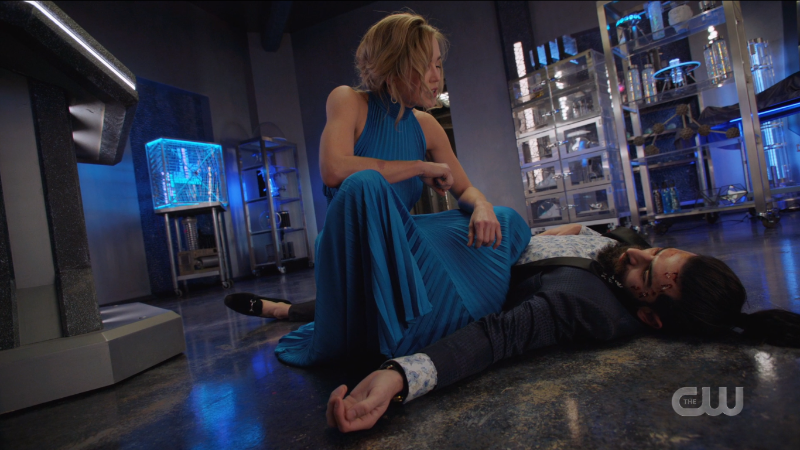 Why is this the most attractive Sara Lance has ever been?

But Bishop points out that she doesn’t have any scars. Sara spots a slab with a body on it and realizes the body is wearing her engagement ring. She pulls back the covers and sees her own dead face blankly staring back at her. She’s a clone now, too. 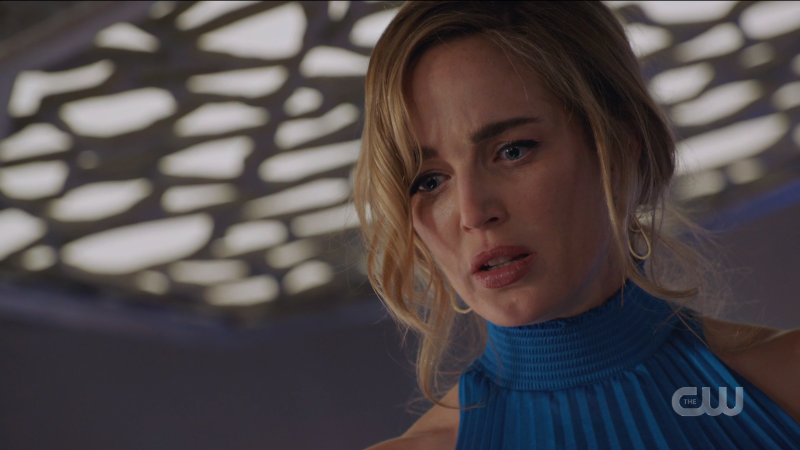 And while I appreciate that the show keeps finding new and exciting ways to shake things up for the Unkillable Sara Lance, I wish they would leave her be! Though maybe it wouldn’t be the end of the world if Sara was a clone like her gal pal.

Next week, it seems like we might try, try again? Which could result in the Legends Barry Allen-ing up the timeline but we’ll see!

Valerie has written 319 articles for us.