Team Riveters comes back to the manor in time for a Persian meal and Bishop is surprised that Gideon eats food, and even more surprised to learn that even though her body is 100% human, her brain and processing power are 100% AI. A fact that will come in handy later.

The next morning, Astra is trying to sort out all the dodgy dealings Mr. Staples had going on, and Gideon (now technically Astra’s assistant) doesn’t understand why humans keep so many secrets. 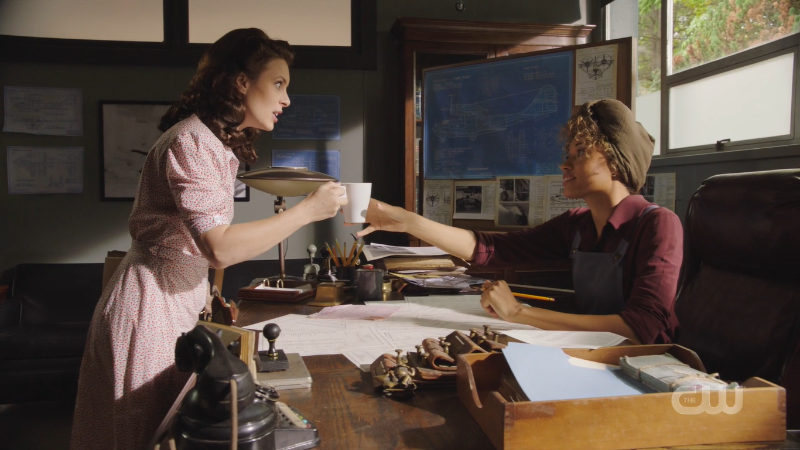 The human world? It’s a mess.

Astra wants to get the factory running more efficiently, and Gideon has some ideas based on some algorithms she has run, but she has the best idea and that’s the one she shares: they should ask the women actually on the floor how they think their work conditions could be improved. So they put up a complaint box that gets filled up real fast, and includes very reasonable requests like making the closest men’s room into a ladies’ room and providing coffee and donuts.

And while Astra works to improve things in the factory, Ava, Sara, and Spooner secretly work to make sure their time machine parts are being made.

Gideon confirms that their changes have improved the efficiency of the factory, but Astra has one more idea. She has Gideon put one last work order into effect: integrating the factory, effective immediately.

The foreman and the lead of recruitment immediately storm out, taking most of the workforce with them, causing Astra to second-guess what she thought was the best decision. 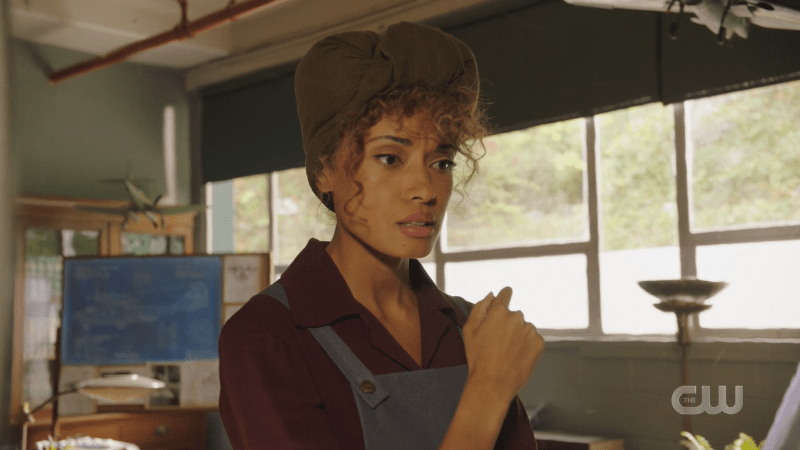 Tiktok has ruined me, so when I tried to think of a caption for this photo the first thing my garbage brain thought of was, “Oh nooo. Our factoryyy. It’s brokennn.”

I appreciate the touch of the recruitment leader being incredibly nice and welcoming to all the new (white) recruits the entire episode and then being the one to stage the walkout, because while it’s accurate to represent racists as grumpy white men, there are also plenty of polite and smiley white women who are just as racist. Just check the election breakdown of voters by race and gender.

Sara doesn’t care about the assholes who walked out, but Ava is worried that if production is slowed too much it will cause a glitch in the matrix.

Seeing production practically screech to a halt, Gladys storms into Mr. Staples’s office to ask what he was thinking when she finds Astra at the desk. Astra confesses that she took over when Mr. Staples found himself in a bit of a statue situation, and Gladys is stressed that Astra tried to do too much too fast. She says that slow and steady progress is the only progress that’s sustainable, and that with most of the women gone, they’ll lose the contract. But when Astra asks if that means Gladys doesn’t think her team can finish the job, she decides to rise to the occasion.

Gladys is sure that either way they’ll all get fired, but Astra says that if they can build the plane, she can secure their jobs. 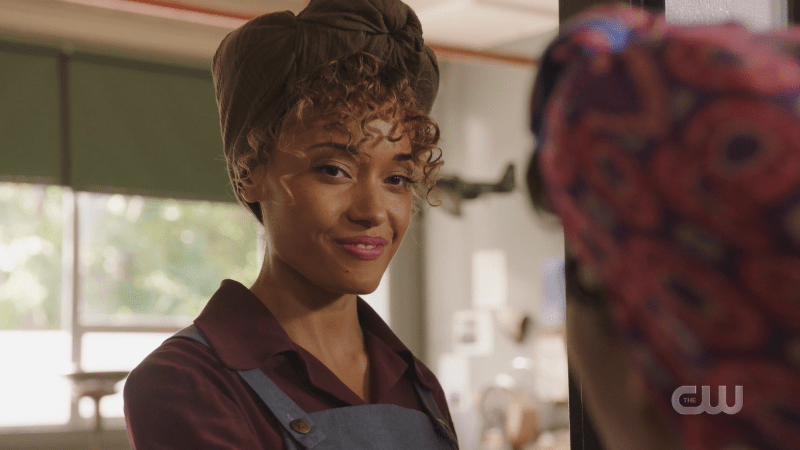 Astra using the manipulation tactics she learned in hell for good instead of evil is delicious.

And so, they get to work.

A song about Rosie the Riveter plays as Gladys’s team hustles; they’re fast and efficient and making solid progress with the help of the few non-racists left, plus the Legends.

Speaking of the Legends, those who aren’t on the floor helping are in the manor making lunches for the women, and deliver them so they can take a very quick break without even getting down from the aircraft. 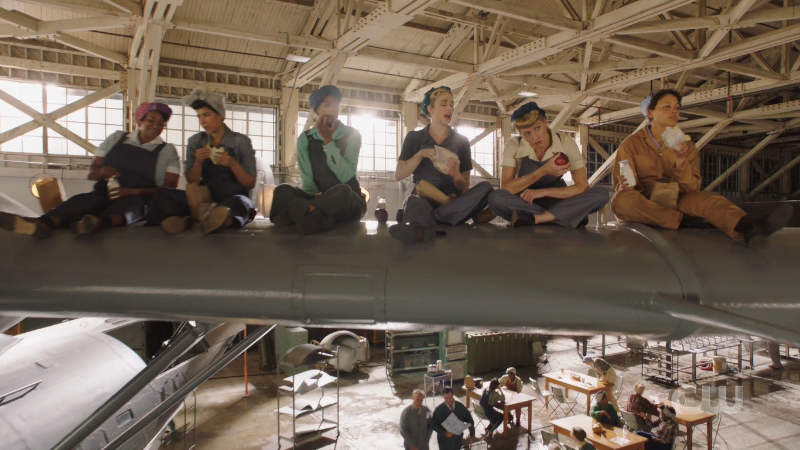 I tried so hard to get a nice, clean shot of this scene because it’s so iconic but Jes and Caity cannot control their faces long enough for both of them to be doing something normal in the same frame.

Behrad brings Astra her lunch in the boss’s office special, and catches her kicking herself for letting her anger put the livelihoods of all these women at risk. Behrad says her intentions were good, and that his life would be better if he had a little more of Astra’s fight. He tells her about his Bishop problem and asks what she would do with a man like that, and when she points to the frozen Mr. Staples, they realize they could maybe both learn from each other.

The women in the factories are starting to lose steam, but Astra comes down to the floor to give them a final rally cry. She tells them that she can’t promise them that the hammer won’t come down on them when the job is done, but they should still be proud of the work they did. When the racists walked out on them, they could have thrown in the towel, but instead they BUILT a PLANE. Built it! A whole airplane! And some boring white man finally (seemingly) allowing them to isn’t why they were able to. They’re able to because they are capable, strong, smart women. 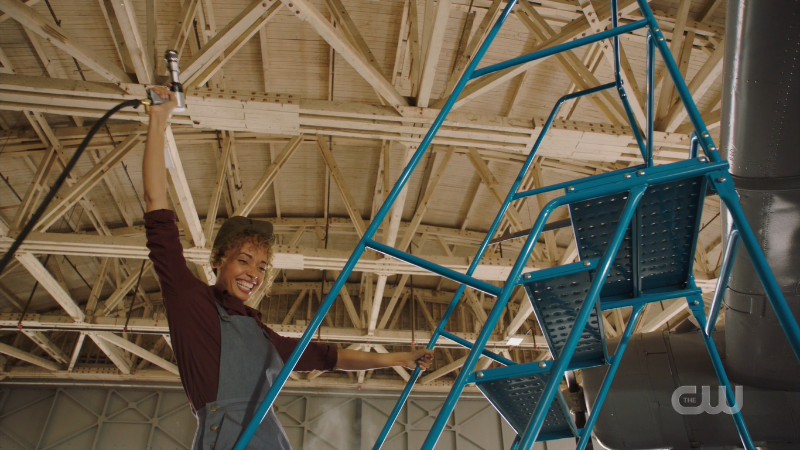 So, fully rallied, they get back to work to push through to the finish line.

In the pocket dimension shaped like Constantine’s manor, Behrad takes Astra’s advice and channels his inner Queen of Hell, just enough to stand up to Bishop and tell him that he makes it hard to be a good host. Bishop hears this feedback, and apologizes by way of an interface he created that will help Davies’s time machine pick a specific point in time to jump to instead of their willy nilly leaps vaguely forward. It works by linking up with Human Gideon’s neural pathways, essentially making her an AI-turned-human-turned-computer.

Bishop admits he’s not great at interpersonal human relationships, hence his predilection for clones and robots, so he thanks Behrad for calling him out and they call a truce.

Fancy Zari, however, can’t accept such a thing because her phone was sacrificed to this machine of his against her will. 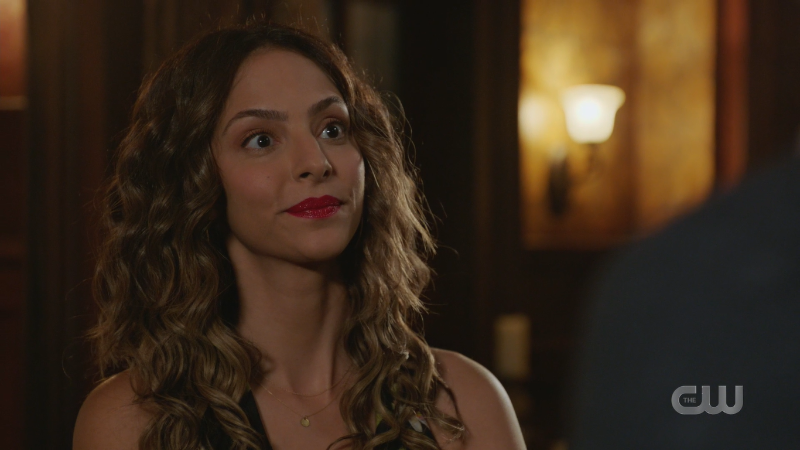 Sorry you were stuck with the boys this week, bb.

Time is running out in the factory, but they push through and finish just in time.

Unfortunately, this is also the exact moment that Mr. Staples wakes up, and he. is. FURIOUS. But before he can fire everyone and get them out of the hangar, Elenaor Roosevelt shows up with Time Magazine in tow, excited to check out the ladies’ work. And her full-hearted enthusiasm warms Astra’s heart. 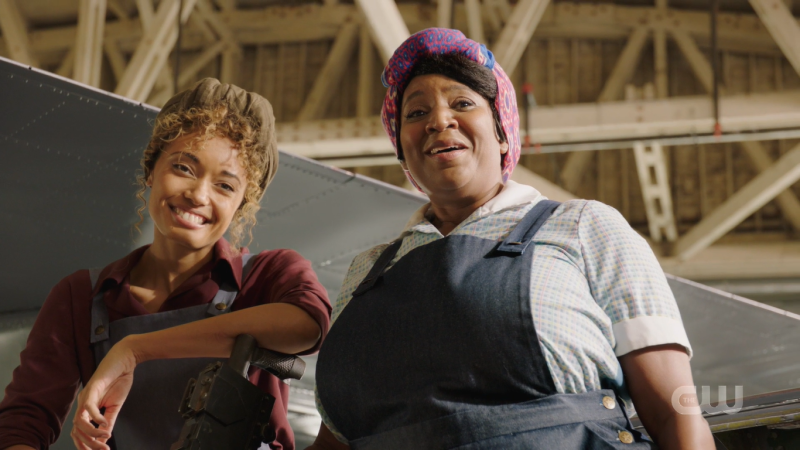 I would do things that would send me directly to hell just to keep this beautiful queen smiling.

Gladys is worried about this whole situation but Astra learned something from Behrad, and knows that Eleanor Roosevelt being their guest will make Staples a good host, and while he politely tries to remove himself from any blame of faulty craftsmanship, the colonel says that the plane is one of the best he’s ever seen, so Staples is quick to jump on board and take some of the credit.

As they all gather for a photo of this momentous occasion, Eleanor plays along and thanks Staples, wondering aloud how lucky they are to have men to lead them in such times, but she gives Astra a big wink; she knows damn well the women were in charge here.

Once the rest of the workers leave, Spooner, Ava and Sara congratulate Astra on a job well done. 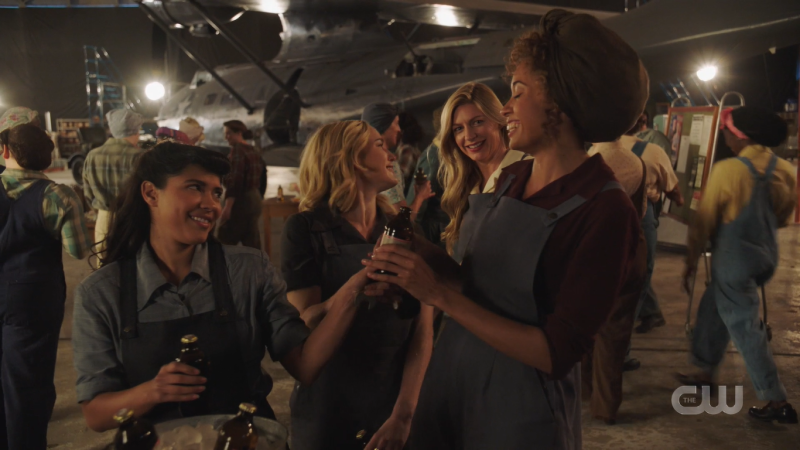 Gosh I love this band of misfits so much.

Davies is still mad about the toilet thing but temporarily allows a truce with Bishop because of his peace offering of the navigator being able to read Human Gideon’s thoughts and direct them to a specific place in time.

When Fancy Zari meets Davies for the first time, she’s furious no one mentioned that he looks exactly like her ex-boyfriend, but no one else thinks he looks anything like Contantine. Which continues to be a bit I enjoy very much. “Doesn’t look like anything to me.”

Before she leaves for the night, Gladys pulls Astra aside to thank her for today, and to revise her earlier advice. Not all progress is slow and steady, sometimes it’s a fast and furious act of rebellion. And even though it wouldn’t have been how Glady approached the situation, Astra should never change and just keep being herself, since she’s beautiful inside and out. Including letting her curls free. 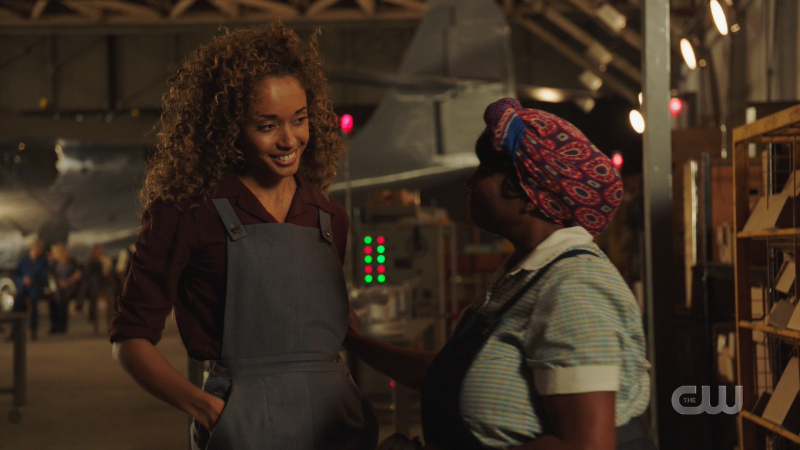 She’s got one hand in her pocket and the other one has my heart in a vice grip.

While the Legends are celebrating, they realize that they integrated the factories too years too soon, and at the same time some figures dressed in black slink into the warehouse and try to shoot them to death. The party is split so Bishop talks Gideon through using his new contraption to just zip them across the factory onto the floor and a bit closer to the Legends. Ava wants Sara and Nate to run but Sara won’t leave Ava; not after the alien situation, not ever again. 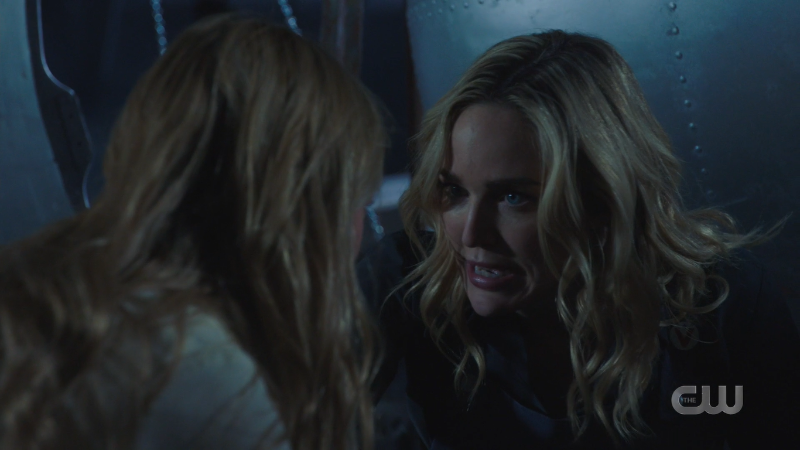 “I will never leave you, I will never go away, we were meant to share each moment, beside you is where I will stay.”

Bishop climbs onto the plane to shoot the mysterious baddies from the newly built plane’s guns, giving the Legends the clearance they need to get to the time machine, but he gives Sara a look that lets her know that he’s willing to make this sacrifice as amends for the suffering he’s caused the team. 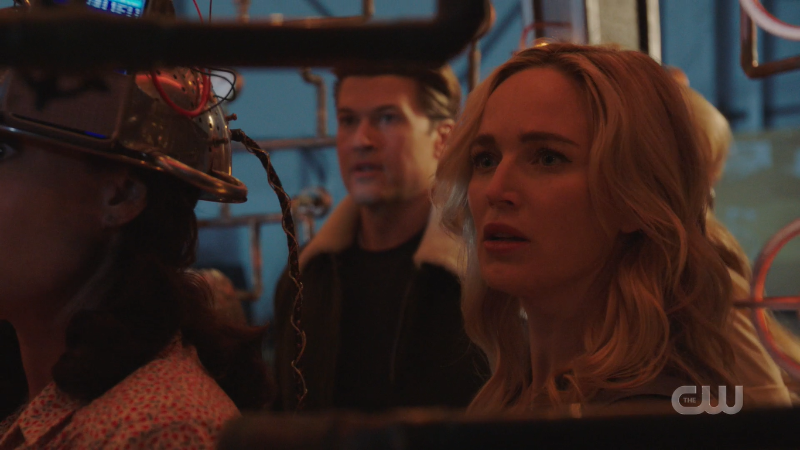 I know this moment was very serious but Gideon looking so sincere with a colander on her head is very funny to me.

And so the Legends use the time machine with the new Gideon upgrade to launch themselves to what they hope will be their present, but as soon as their gone, their attackers pull off their masks. And reveal that they are…the Legends! But evil! And probably either clones or robots created by Evil Gideon! 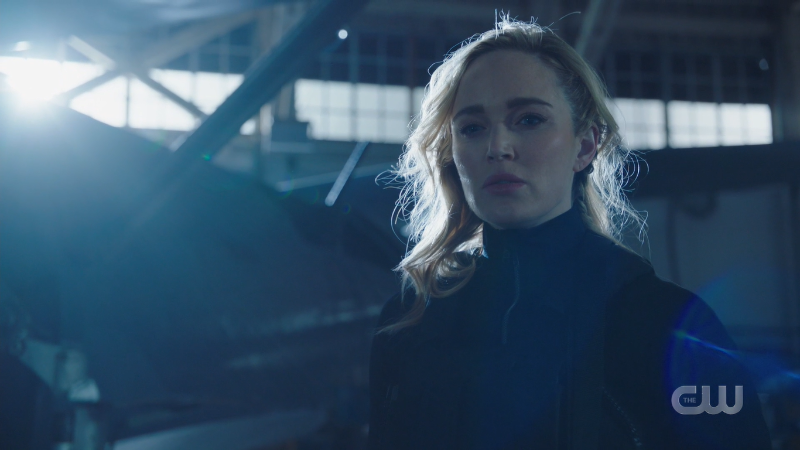 The CW’s age-old tradition of giving me villains I’m attracted to continues!

Which, not for nothing, but I sort of almost predicted back when the Waverider first got exploded by a rogue Waverider, though admittedly I thought somehow they were more directly linked, instead of a ricochet from a Bishop invention.

Either way, Legends of Tomorrow is now officially on winter hiatus, and will return with new episodes starting January 12th. See you then!