Back at the ranch, Astra keeps casting her spell, even after the Legends join her and try to stop her. It seems to be working until they notice Astra’s nose is bleeding. 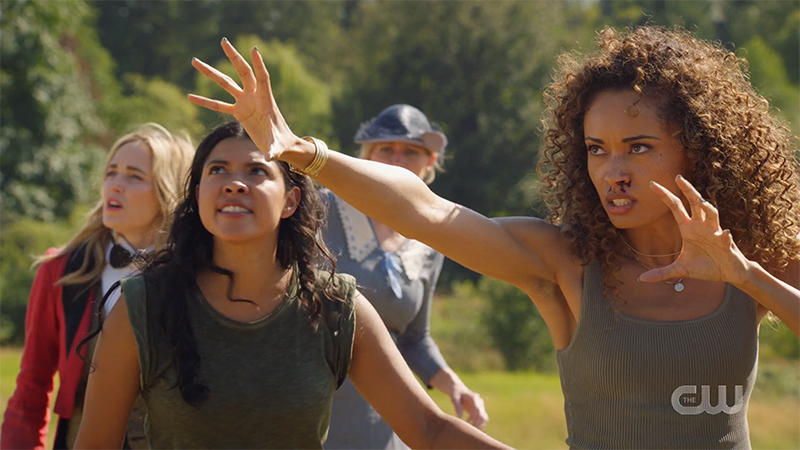 Spooner begs Astra to stop but of course she doesn’t. She pushes through until she collapses into Spooner’s arms. The pieces crashing to the ground causes quite the sight, and Hoover knows exactly where to look for the culprits next.

When Astra wakes up, weak and tired, Spooner is by her bedside, just as Astra was for her just yesterday. Spooner is furious with her, and the words she’s saying imply she’s angry Astra brought more negative attention to her mom, but the tone of her voice says there’s more to it than that. 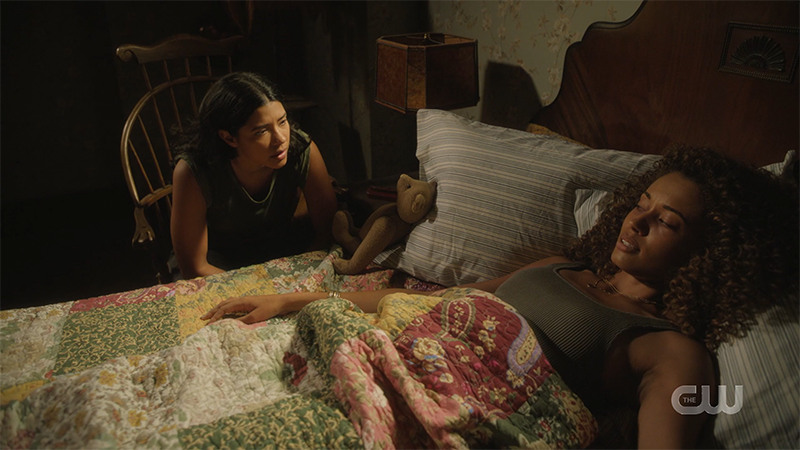 “There’s room enough in this bed for two, FYI.”

When Hoover rolls up, Gloria tells the Legends to hide, and they…well, they try. When it becomes clear they are all extremely bad at hide and seek, Behrad tells Zari to use the key she got from Constantine on the locked closet door. And sure enough, it fits perfectly, and when they open the door, it’s a hallway that was somehow familiar-looking to me, a viewer of this show, but not them, the people who have literally walked through this very hallway.

They hear Hoover coming to check the bedroom so Sara shoves her team into the door, leaving Astra and Spooner behind and hoping for the best. Luckily, as apparently only I could tell, the hallway leads to Constantine’s mansion.

And so, when Hoover opens the door to the bedroom, he sees only a laid-up Astra. And when he opens the closet door, it’s just a closet. 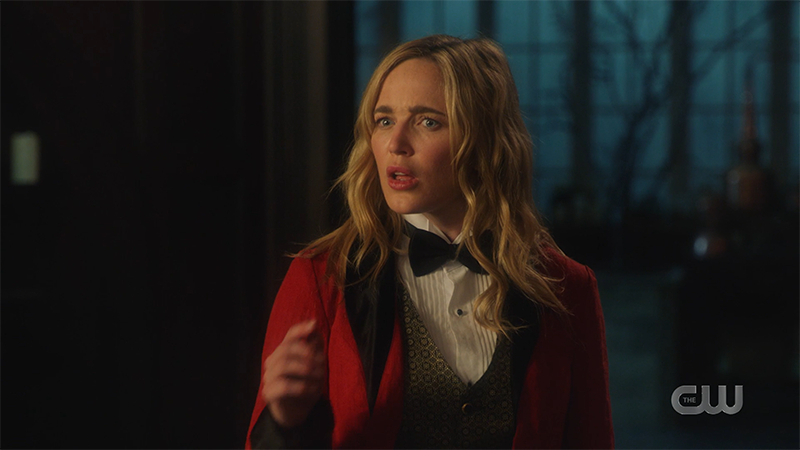 “Would you say we’re in…Purgatory?”

Zari doesn’t understand why Constantine would give her this space; she has to spend half her time in a space just like this except it has her ancestors to talk to. Behrad suspects it’s because Constantine knew that Zari could probably use some alone time, but Zari shrugs this off, saying she doesn’t need to be alone, she thrives in the spotlight, she’s not putting up any facades she needs to let down. But then she sees her reflection in the mirror. 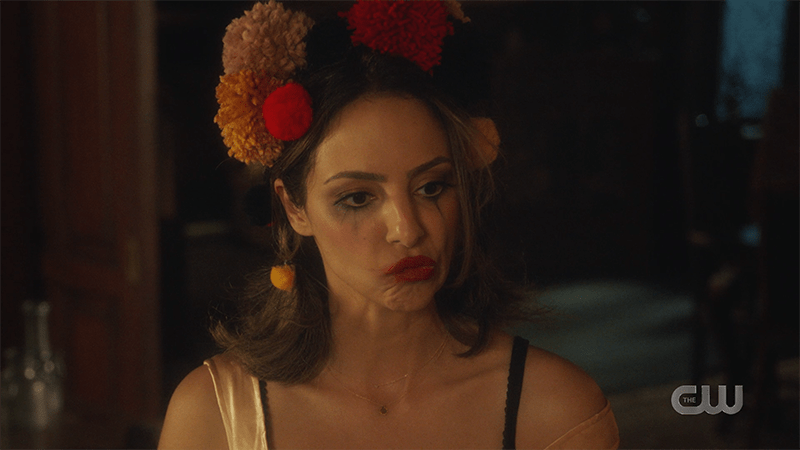 Me when I catch myself having genuine hope for Supercorp Endgame. #ClownLife

Meanwhile, Ava is thumbing through the TBH like it’s a comfort blanket and Sara tries to reassure her again that they can figure this out, together. Ava says they’re getting sloppy; they’re breaking rules, they don’t have any of their usual tools, and they don’t have Gideon to guide them. They’re flailing and she hates it. Sara swears that you can’t find all your answers in a rulebook, but Ava would like to hold onto it anyway, and Sara leaves her to it. 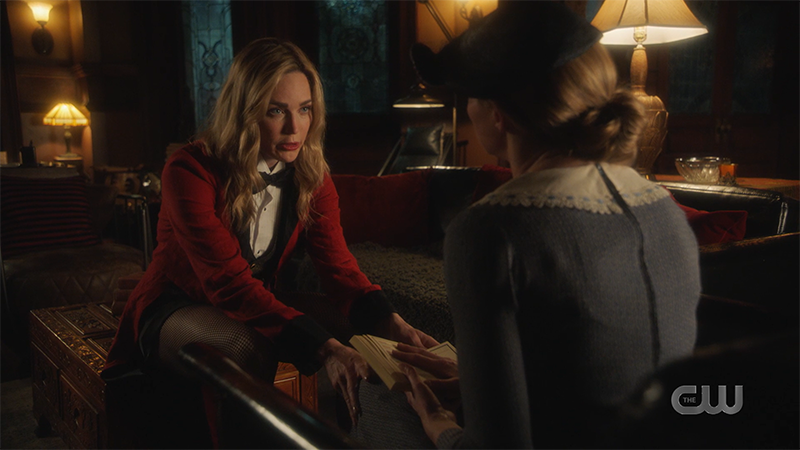 When Hoover is gone, the Legends march out of the closet, and right past a mildly confused Astra. 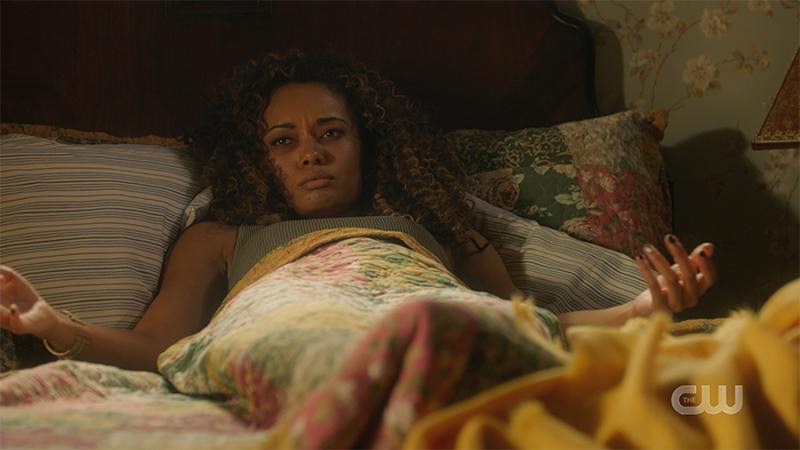 “What the hell, is everyone coming out of the closet but me?”

Ava’s thumbing through the TBH comes in handy once again when she finds an entry about a man named Davies in New York who might be able to help them time travel back to where they came from. Sara thinks they should pretend to be the Midvale Gang to try to lure Hoover away from suspecting Gloria, and she is almost vibrating with excitement when she adds, “All we’ll have to do is rob some banks.” 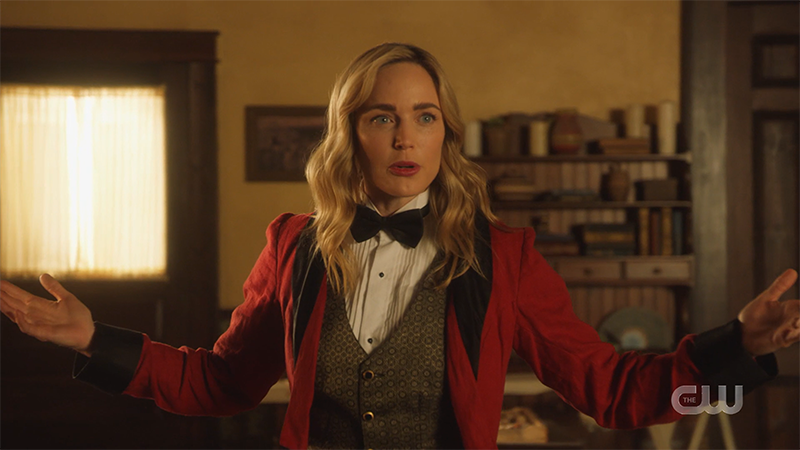 Be gay, do crime!

Ava’s stress levels were not at all helped by the literal CRIME SPREE her new wife just suggested but Sara gets her to agree by promising that Ava can make a list of everything they do that could be negatively affecting the timeline, and once they get back to their timeship, they will come back and fix every single item one at a time. 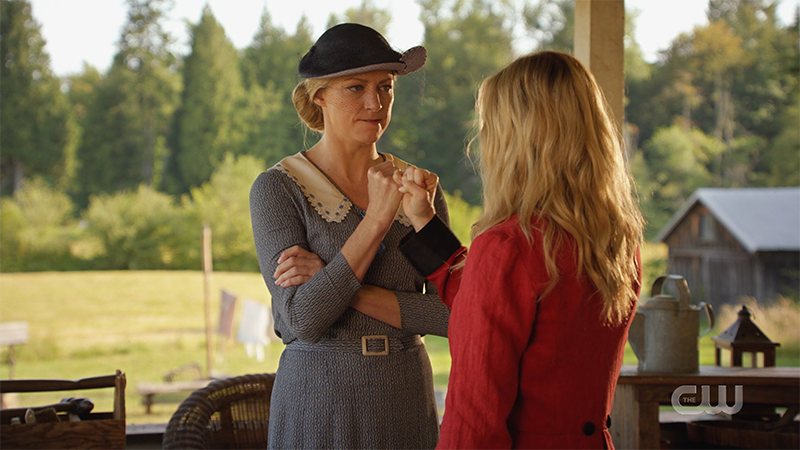 Their commitment to the pinky promise brings me such joy.

Astra is still weak and Spooner doesn’t want to leave her or her mother behind, so Sara ties them up and her and the rest of the Legends make a show of stealing Hoover’s car and bandit-ing away.

Once they get into town, Sara and Ava put on their flapper finest and stroll into a bank, ready to rob. 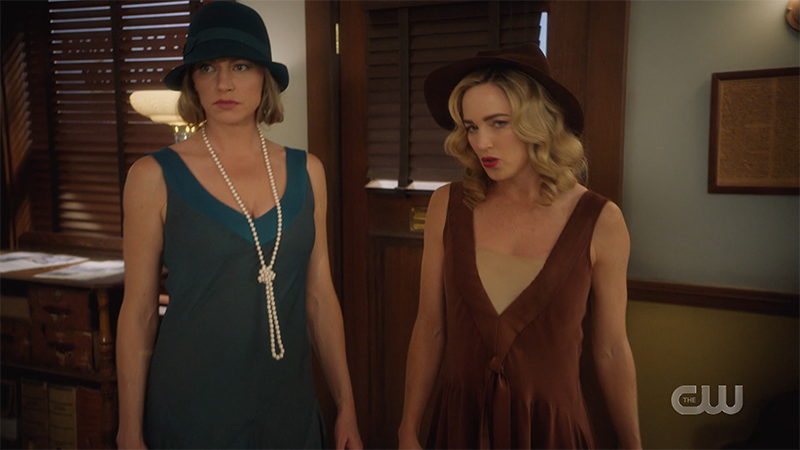 I won’t be mad if they’re “stuck” in 20s fashion for a little while longer.

They distract the men with their wiles and steal their guns with their skills and shoot the ceiling a bunch and steal exactly how much they need to get them to New York and not a penny more.

Nate and Behrad are keeping watch outside and try to tell a passer by that they’re the Midland Gang but she’s a Murderino and knows darn well they’re not. So she helps them come up with a new name. They decide “Legends of Tomorrow” is too wordy (and as someone who has to put it in a limited-character recap title, I agree), so they go with the Bullet Blondes. And much to said blondes’ confusion, they exit the bank to a round of applause.

Ava write the amount they stole on her IOU list as they all climb into the getaway car. Hoover has already set up a roadblock, but Sara tells them to gun it anyway. 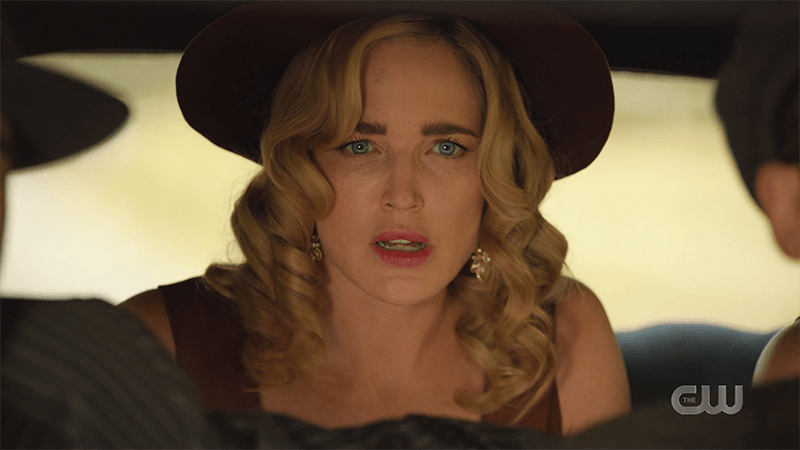 Sara was making decisions this episode with the chaotic energy of my rogue when I play D&D and I was amused.

Well, not before putting their resident man of steel behind the wheel and making sure everyone else is out of the line of fire. (Adorably, she also ducks, even though she’s bulletproof, nothing to lose.) Sara tries to reassure Ava this is a small blip in the timeline, but when one thing leads to another and J. Edgar Hoover ends up dead on the ground by way of a bullet ricocheting off Nate’s metal dome, Ava can no longer take her wife at her word. With the timeline royally screwed and no Gideon to even tell her how badly, Ava looks to the sky and declare she is quite done living this life, and lies on the ground in despair. 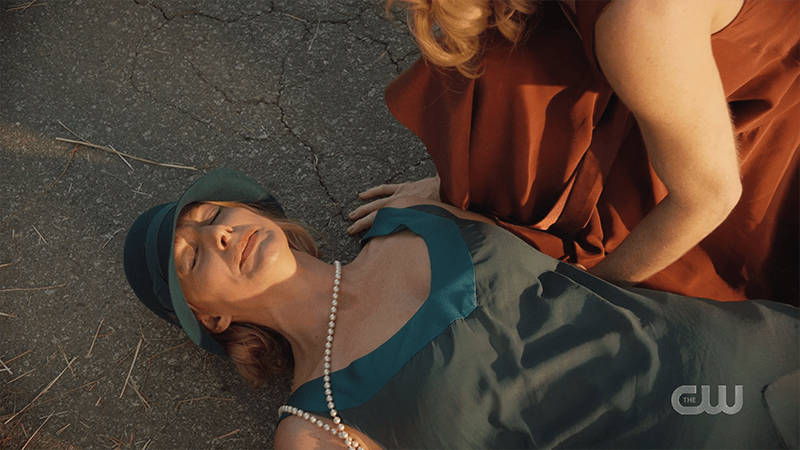 Me in my apartment at the slightest inconvenience.

Sara tries to talk her down (or, well, technically up), trying to conjure images of their eventual honeymoon, where they can walk along the beach and listen to her podcast. Mention of the StabCast does get Ava to sit up, but not for the idea of listening to it with Sara. No, she decides to use her true crime knowledge to clean up their mess. She can’t save the timeline from losing Hoover, but she can at least keep the trail of clues from leading back to a ragtag bunch of time travelers.

She decides they have to get rid of the body, and tells Gary to eat it. He’s a little uncomfortable with the idea, but will do anything Ava says, so he devours the evidence.

Back in Odessa, Astra talks to Gloria about how she messed up, and Gloria tells a story about how her mother was a healer and tried to teach her but it wasn’t until Gloria went about things her own way that she truly became good at it. Like Lena Luthor learned very recently, magic isn’t about recreating, it’s about creating. Astra thinks you have to be broody and angry and walk alone on a dark path to do magic well, but Gloria reminds her that one of Astra’s best qualities is that she’s decidedly not John Constantine, so she shouldn’t be trying to do magic like him. 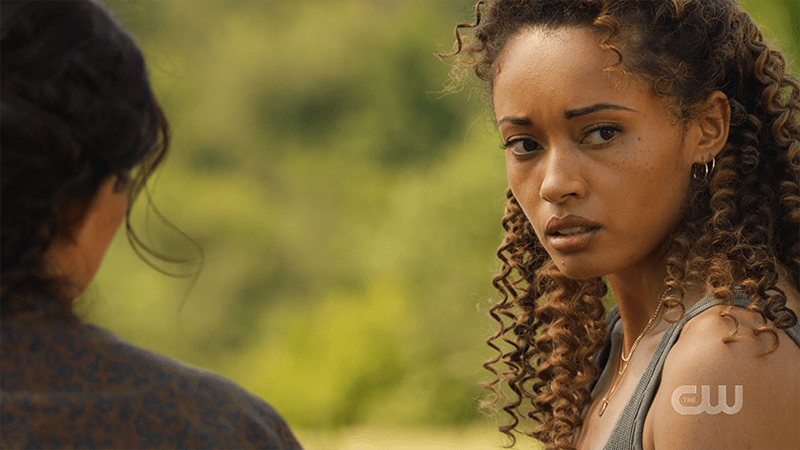 I accidentally called Gloria Astra’s mother-in-law in my notes, that’s how deep into my Spatula ship I am.

Astra wanders off and finds Spooner making a Waverider graveyard. Astra says she’s going to hiss that hunk of metal and Spooner points out how ironic that is, coming from the former Queen of Hell. Astra apologizes to Spooner for how she acted earlier, saying that she was trying to prove herself, saying that she didn’t feel worthy of following in John’s footsteps. But Spooner agrees with me and says that we don’t need another John. Hell we barely needed the first one. And Spooner admits to Astra that she wasn’t really mad about the attention Astra’s spell caused earlier; she was mad that Astra put her life in danger. Astra is her best friend, and she doesn’t want to lose her. And Spooner is Astra’s best friend, too. 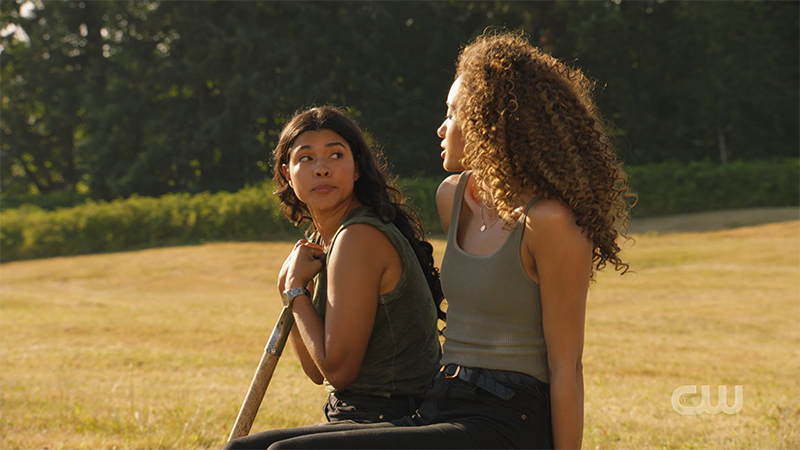 Finding that first friend after you start finally letting down your façade and being your true self is very important/rewarding friendship.

And as much as I do ship Spatula, because I am a compost gay, I do also legitimately buy them as first-best-friends.

Astra tells Spooner that what’s funny is she had almost finished the spell. She only needed one more word. She says it now, sitting atop a heap of dirt covering a chunk of the Waverider, and then absentmindedly wishes Gideon were here. And maybe partially because it was said while thinking of friendship instead of fury, magic pours out of Astra, through the dirt and into the Waverider.

But it’s not the Waverider that is resurrected. No, instead, a familiar-looking redhead emerges from the rubble, naked as Daenerys after the fire: Gideon, in the flesh. (And only flesh.) 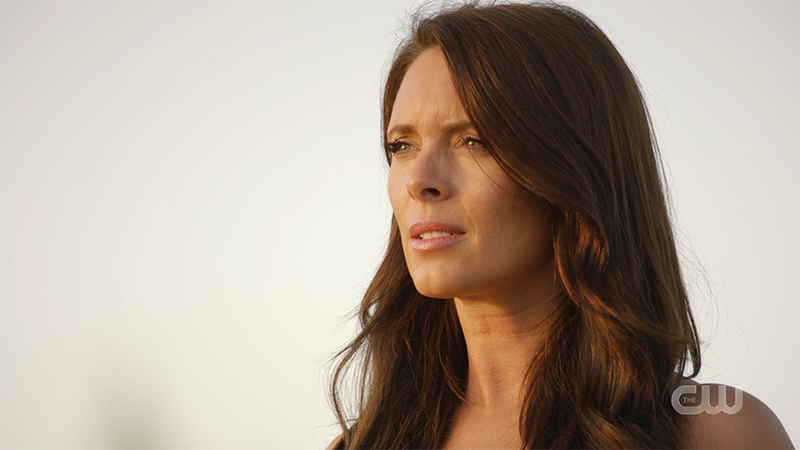 Ahh! I’m so excited to have traded some boring boys for Gideon, and I can’t wait to see what other shenanigans these kids get up to next. For example, getting mixed up with Al Capone!