Lauren Monger’s webcomic, which I don’t think has an official name, but is chronicled on the tumblr Terrible Terrible Terrible, is grim and gritty, dirty and devious, full of gut punches and stubbed toes and rage and clenched fists. It screams until it’s hoarse and laughs at itself after it falls on its face. Terrible Terrible Terrible is the furry online comic version of a Mountain Goats song. Reading these comics conjures up the same feelings as listening to songs like “You Were Cool” and “The Best Ever Death Metal Band in Denton.” It roots for the underdog, but it doesn’t pretend they’re something they’re not. These are punk kids who get drunk, cough up blood and can’t hold down a real job. And that’s part of what makes them great. 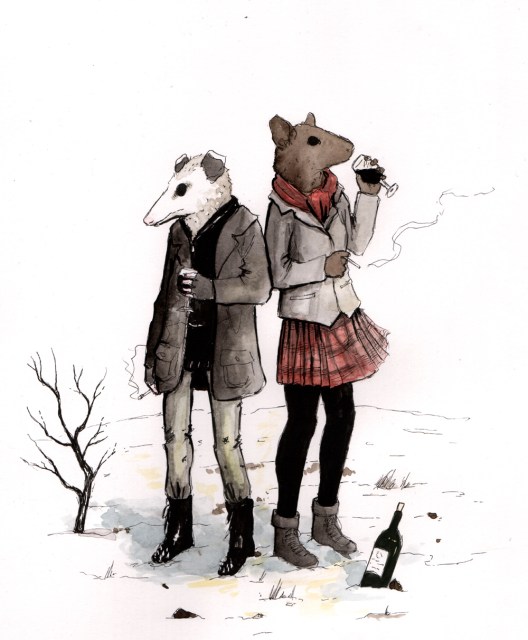 Terrible Terrible Terrible follows an slacker punk opossum named Clementine and several of her friends. These characters act how I felt inside for much of my early college years. If my depression hadn’t consumed me to the point where I wasn’t able to be myself or really live my life, I would like to think that I would have gotten into adventures like the ones shown in these comics. Now, they’re not necessarily glamourous or aspirational comics, but that’s what makes them resonate so much. Not only do they remind me of the kinds of thoughts and feelings I used to have (and honestly, sometimes still do), but they also seem realistic and down-to-earth. Even when Clementine is summoning an Incubus who ends up being not exactly what she had in mind, she does it in a way that seems totally plausible to me. 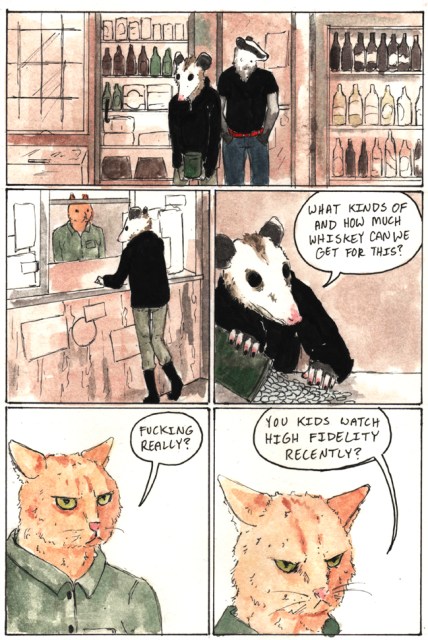 The first Terrible Terrible Terrible comic features Clementine, an opossum, being bored and summoning an Incubus. The demon she summons doesn’t quite live up to her expectations, but still, he’s definitely something. Next there’s a comic where Clementine and one of her friends, Bennet the raccoon listening to music and coming up with silly names for punk bands. It’s in the next comic, however, that Terrible Terrible Terrible really finds its footing. This comic, titled “Douglas Has a Bad Day” is a masterpiece. I’ve got to warn you, it’s full of blood and puke and organs, but it is absolutely beautiful. It starts off having the regular level of badassness that you’d expect to see in a comic about furry punks and their misadventures. Then Douglas starts vomiting blood after he learns that his girlfriend cheated on him. The situation escalates even further and soon Douglas actually vomits up his own heart and is lying there dying on the couch. Clementine’s solution on how to help him is absolutely priceless.

The comics stayed at A+ level after this. Even a simple comic about Clementine lying about taking her medication hits like a ton of bricks. “Clementine and Kyle Get Drunk” is somewhat lighter fare than some of the other comics, but it keeps its sharp edge and dirty underbelly. Monger’s comment that it’s based on actual events makes it even more priceless. Then, the other day, Monger posted a comic for the first time in a while, and it took the universe she’s crafted to a whole other level. In this comic, titled “Clementine Gets a Real Job?” Clementine tries to do just that. On the way, she has to deal with everything from a struggling economy, to apathy and lack of skills to trying to grow up and even sexism and the patriarchy. At first, Clementine’s job experience is going just as poorly as she assumed it would, she struggles counting change and figuring out which cars are which at the gas station she works at, but eventually, things start to turn around when her boss says that she can come back in another day to work some more. However, when she thanks him for giving her a chance, he says, “Haha, well, we just needed a pretty face behind the register.” This understandably leaves her shaken and as she starts walking home, trying to leave that toxic atmosphere behind. However, even when she’s trying to break free from the sexist comments of her boss, she runs into the patriarchy wherever she goes. It’s a sad and frustrating story, but unfortunately, it’s one that’s all to realistic and relatable for too many of us. 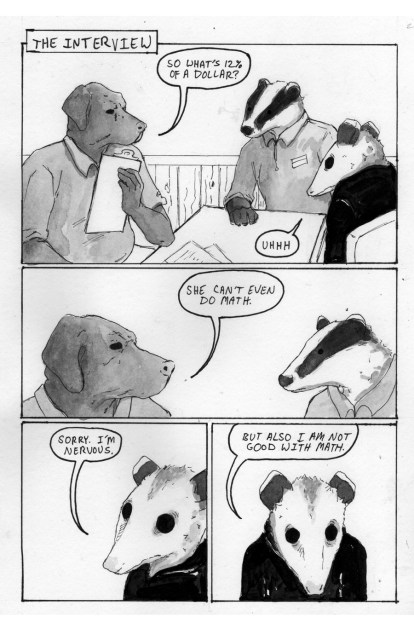 The art is just as punk rock as the characters themselves. There’s a roughness to the drawings, they look almost like instead of a pen, the artist used a razor blade dipped in ink to make these drawings. By having her main characters be animals like squirrels and badgers and opossums, Monger perfectly set herself up to convey a sense of filth and rejection. And she makes the excellent decision of not humanizing the animals. Although they’ve got the bodies of humans, their heads and faces are 100% animalistic. The rigid pointy teeth, beady little eyes and ratty fur that comes with this make them the ultimate dirtbags. Furthermore, the way Monger combines watercolor and ink wash techniques gives the comic the perfect grimy and shadowy feel that you would expect from the characters. She has so perfectly synchronized everything from character designs to art techniques to dialogue to stories. It all fits so naturally together that you’d never guess it was fiction.

I can’t believe how good these comics are. While there aren’t too many comics up right now, each one is eminently re-readable. I’ve pretty much wanted to cover Terrible Terrible Terrible here in Drawn to Comics since day one, and I’ve just been waiting for Monger to come out with more comics so that I could share them with the world. If you’re interested in buying art prints featuring these characters (and honestly, why wouldn’t you be?), you can check some out at Monger’s Society6 store.