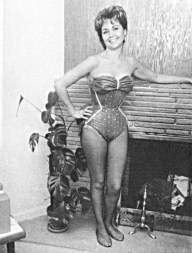 Kristen Stewart, Sam Riley and Garrett Hedlund are signed on for Walter Salles’ long-anticipated big-screen adaptation of Jack Kerouac’s On the Road. This remake has been eons in the making. We’ve been planning to hate it with all of our elitist literature-loving souls, because it will obviously not be as good as the book (and because prior adaptations of this material haven’t been so kind for example the movie Neal Cassady starring Tate Donovan as Neal Cassady portrayed Jack Kerouac’s raucous, intoxicating and manic best friend as a nervous, insecure and basically accidentally charismatic idiot with none of the Signature Infectious Neal Cassady Energy reflected in Kerouac’s prose BUT I DIGRESS), but we have changed our minds. WE CAN’T WAIT

From “The Women of the Beat Generation”:

LuAnne Henderson, once described by Jack Kerouac as “a nymph with waist-legth dirty blond hair was as adventurous as Neal… with Neal at the wheel of the stolen Hudson, they raced at top speed on a spree of grifting, begging, borrowing and stealing gas and food. She thrilled to every minute… LuAnne wasn’t just along for the ride, she was an equal participant, loving both Beats until the day Neal dumpd her and jack at the corner of O’Farrell and Grant in San Francisco with no money and nowhere to go.

In ‘news’ that we’d rather not believe, Kristen Stewart & Robert Pattison have “confirmed” to Oprah Winfrey that they are dating.

By the time the country singer Chely Wright appeared on “Today” Wednesday morning, the secret was out. This minor star of the 1990s and early 2000s was coming out as a lesbian. During her early years in Nashville, “I knew that I needed to hide this to achieve my dreams,” she told the host Natalie Morales… Ms. Wright’s high-profile declaration casts a spotlight on the world of country music, which has historically had little room for differences. Ms. Wright’s dissent from the genre’s talking points — often conservative and religious, though rarely blatantly homophobic — arrived in tandem with the release of her memoir, “Like Me: Confessions of a Heartland Country Singer” (Pantheon), and a new album, “Lifted Off the Ground” (Painted Red/Vanguard). But the impact of her story is really more powerful on country music’s monolithic image than on her own image.

The Lynch can do no wrong, even in high school when: “I had an affair with my teacher and it was really an amazing, mind-blowing experience. She was older and I was crazy about her and it was great – really wonderful.” (@3AM)

We have now confirmed for the 500th time that Brittany and Santana will not be girlfriends or friends with benefits, just close friends with exciting flirtations:

Vanity Fair: O.K., let’s talk about the elephant in the room: Britt’s flirtations with Santana. One word: hot. Where is this going? Is it going to head more toward B.F.F.s or F.W.B.s?
Heather Morris: Probably more of the B.F.F. side. What I’ve been told is, we’re not that type of television show. It’s funny to play with, but we’re not going to go in that direction.

Our friend Andrea at lez-behonest has something to tell you about:

Lesbians are you ready for sweet heat? We Are! Well before sweet heat we want you all to know about Tomboyz Quarterly Sweet heat Miami Summer issue which features everything you want to know about Miami Sweet Heat, with exclusive interviews with artist such as Trina, there’s also an article in the magazine featured by lez-behonest.com, this magazine is dedicated to the lesbian community and it has everything every lesbian wants to know! Also don’t forget Trina, B.Scott and a few other people will be at Miami Sweet heat hosting and attending parties this year, for more information on sweet heat goto www.sweetheat.miami.net! See you there!

Also you should buy your tickets now for Lesbian Attack Gives Back, which takes place on May 22nd in Los Angeles!