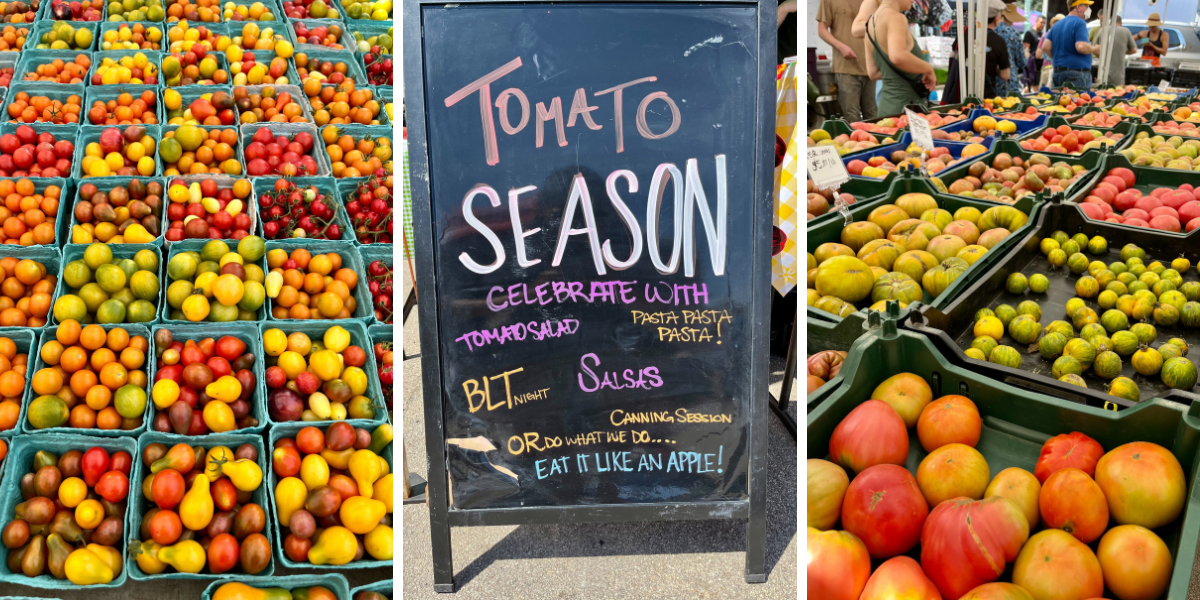 all photos courtesy of the author

There is no greater joy than slicing into a slightly misshapen, plump tomato and watching its seeds squirt absolutely everywhere. In a world without tomatoes, we would never know the pleasure that is watching tomato juice run down our wrists, knowing we’re mere seconds away from eating the best bruschetta of our lives. As a New Jersey gay, I care deeply about tomatoes (Campbell’s originally sourced most of their tomatoes from local farms in New Jersey).

Tomato season and Leo season overlap slightly, which honestly makes perfect sense. Tomatoes are bold, demanding to take up space whether we like it or not. They’re messy, but in the best way, like that one friend who is decidedly A Lot but who also makes every party better. Lucky for us, we’re in prime tomato season right now. Tomatoes line the edges of every table at my local farmers market, begging to be taken home before it’s too late. 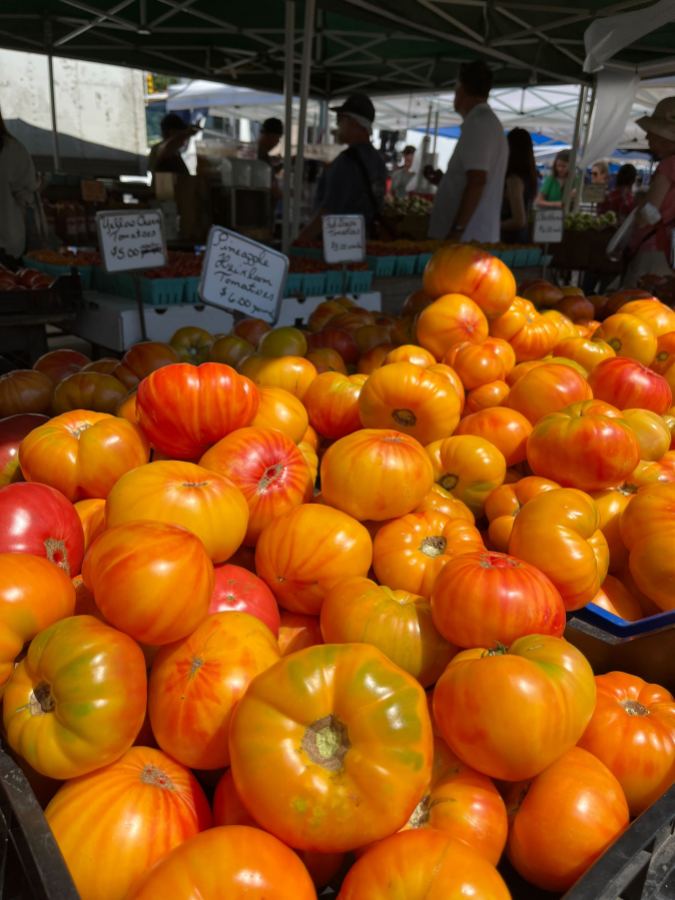 Tomato season is my Christmas. Like all good Christmas centerpieces, cherry tomatoes live on my kitchen table, so that every time I pass them, I can pop a few in my mouth as a snack. Obama had his pocket almonds; I have my table tomatoes.

If you’re like me, you’ve fallen for perhaps too many tomatoes this season and now have a veritable bounty of plump, juicy produce waiting to be eaten. If I’m feeling lazy, I’ll slice up some big tomatoes from the market and just drizzle them with EVOO and a little Maldon. But if I’m feeling adventurous, or just want a Kitchen Project, I’ll do something a little more elaborate, like one of these options:

Galettes have Hot Crunchy Girl vibes — they’re just naturally gorgeous. They don’t require a ton of work but make you look like you’ve spent all day in the kitchen. Honestly, taking a galette to a dinner party is a surefire way to invite compliments. I love to go the galette route, especially when I have a bunch of tomatoes that are all different colors — it’s a nice way to put them on display!

I like to use equal parts buckwheat and all-purpose flour when making a galette, just so I get a little extra earthiness in the flaky dough. I also salt and drain my tomato slices ahead of time, like this recipe recommends, so that the bottom of my galette stays crunchy and flaky!

The last few weeks of summer in New York are always marked by blisteringly hot days and a thick veil of humidity that somehow follows you indoors. The heat claims your body as its own, and you have no choice but to surrender. Gazpacho is a dish made for this time of year, a chilled soup (savory smoothie?) that requires no cooking, can be made ahead of time, and uses all the little leftover bits of produce you might have hanging out in the back of your fridge.

If you’re a precise person (which I am not), you could absolutely follow a recipe — maybe even this one! If you prefer to cook from the heart, try this: Grab a few tomatoes, ideally big ones, and slice them into big chunks. Blend them along with half a bell pepper, half a peeled cucumber, a clove of garlic, a shallot or half an onion, and a few torn-off pieces of crusty bread (optional, I often skip it). Continue to blend while drizzling in some olive oil, the tiniest little splash of sherry or red wine vinegar, and a teaspoon of salt or so! Strain the resulting mixture if you want something smoother.

If I’m in a cooking rut, I like to fall back on the classic combo of salt, fat, tomato, bread. Tomato mayo sandwiches are a classic in my house, as is pan con tomate. My favorite variation on this combo, though, is a very loose version of the best bagel sandwich I’ve ever had (surprisingly not in NY, but in LA): cream cheese on a toasted everything bagel, topped with thinly sliced heirloom tomato, red onion, cucumber, capers, dill, olive oil, salt, and pepper. I wouldn’t do this with a winter tomato, but peak season produce? Absolutely. 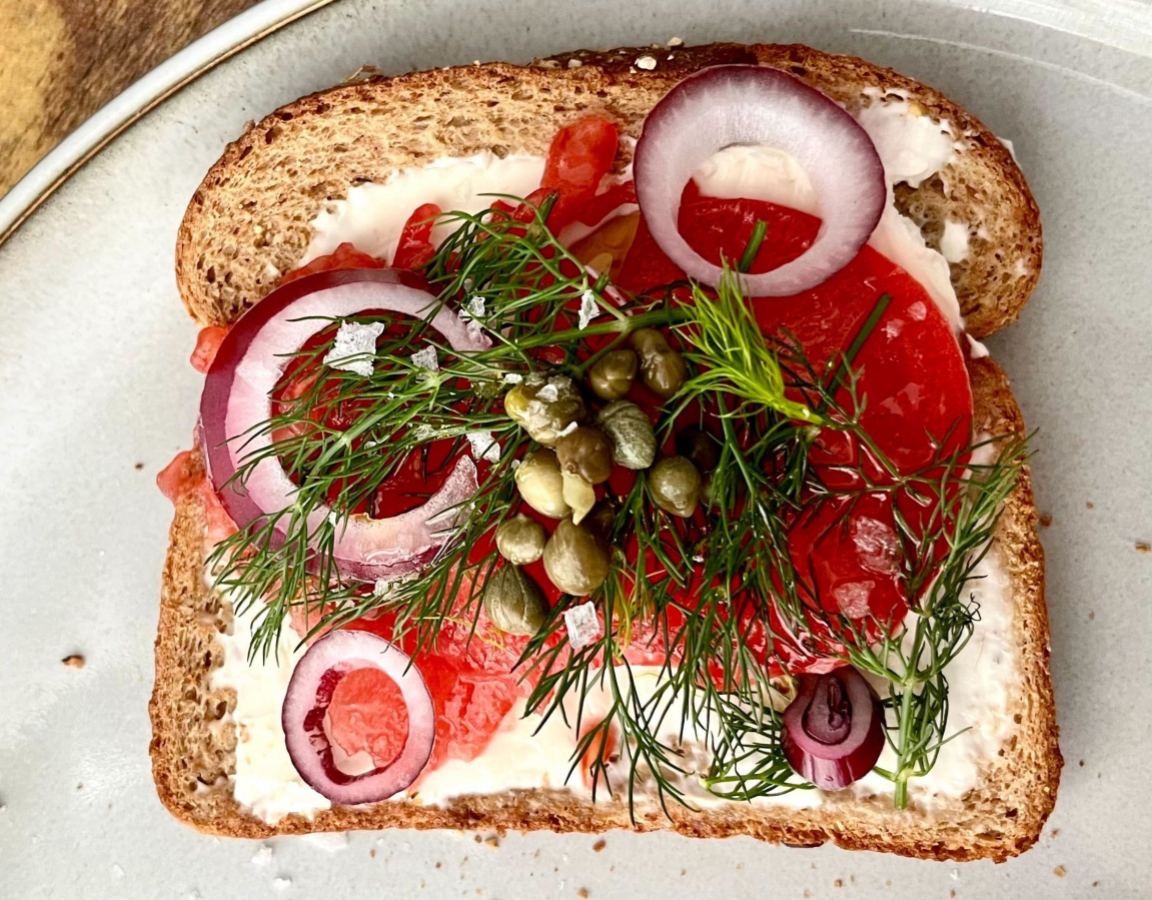 When all else fails, roast your tomatoes — especially if they’re looking a little worse for wear and you’ve already made too many batches of gazpacho. If you have cherry tomatoes, you could make cherry tomato confit! Slow roast them in the oven with a bunch of olive oil and a few cloves of garlic at 250-275F until a few of them start to burst. Spread them on toast, eat them plain, or toss them with spaghetti.

If confit isn’t your thing, you could do a quick pan braise! Grab a skillet, cut your tomatoes so that they fit comfortably in the pan when a lid is on top, then cook them cut side down in (you guessed it) olive oil, salt, onion, and garlic. The tomatoes gently release and then cook in their own juices while their bottoms brown. Once they’re braised, you could eat them with mozzarella or serve them alongside a mild fish!

If you’re not already, please store your whole tomatoes at room temperature! Sure, popping them in the fridge will extend their life, but doing so also compromises flavor. If you absolutely must buy tomatoes and then wait several days before eating them, try to find firmer tomatoes so that they can continue to ripen at room temperature while you do other things. Once they’re cut, though, store them cut side down in the fridge. Yes, refrigerating tomatoes ruins their flavor, but the alternative is having them become a hotbed for bacteria at room temperature.

Ashni is a writer, comedian, and farmer's market enthusiast. When they're not writing, they can be found soaking up the sun, trying to make a container garden happen, or reading queer YA.

ashni has written 10 articles for us.