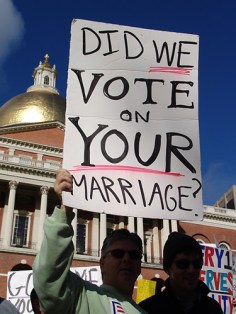 Judge Walker is ready for you now, gay rights advocates/opponents. On Tuesday he presented a nine-page document full of questions for both sides, which they should answer in their closing arguments next week.

How can marriage between gay or lesbian couples be a fundamental right in a nation that denied all legal protection to their relationships until very recently?

Chief U.S. District Judge Vaughn Walker put sponsors of Proposition 8 on the spot with another question: In a state that treats domestic partners the same as spouses, “what purpose is served by differentiating – in name only – between same-sex and opposite-sex unions?”

Other insightful questions include What evidence shows that same sex marriage are are “a drastic or far-reaching change to the institution of marriage?” and “Why is legislating based on moral disapproval of homosexuality not tantamount to discrimination?” Obvs to us, all the questions to the gay rights supporters sound a lot more ridic ’cause let’s be honest, they have more of a leg to stand on. And based on the questions, he seems to be really challenging our side with the idea that if voters really did believe they were protecting children and families, they were operating on good faith and not discrimination. (Even though they were obvs wrong.) But overall, I’m glad he did this and pulled apart everyone’s arguments. Maybe it will cut down on the claims that he’s biased because of his sexuality. That would be nice, though unlikely. And while the “how can marriage be a fundamental right” might sound cold to those of us who are waiting on being given our fundamental rights, think about it this way: he could mean “How can you defend the idea that it’s a fundamental right,” OR he could be asking “How can we as a nation move forward into making this a realistic possibility?” Maybe it’s wishful thinking on our part, but the second one sounds like a pretty good thing to be thinking about! 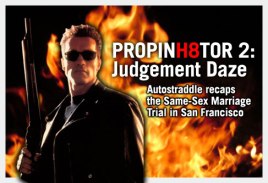 Anyway, GET EXCITED FOR CLOSING ARGUMENTS next Wednesday! It will probs take him another six months to make his decision after that, fair warning. He’s a slow mover, Mr. Walker. We promise we’ll recap/discuss/whatever the arguments next week, and in the meantime, please refresh yourself on our Judgment Daze recaps of the Prop 8 trial itself. Rachel is really funny, you’ll be entertained, I promise.

(PS – in a separate but related story, the Mormon Church agreed to pay a $5,500 fine for failing to report the $37,000 it donated to the Prop 8 campaign. Is that small change? Better than nothing? You decide.) (You should watch “8: The Mormon Proposition” when it comes out to fully understand what we’re talking about w/r/t how that’s nothing compared to how much they gave to the cause.)

The queer Malawian couple who were recently pardoned by their president have reportedly split up because Steven Monjeza has started seeing another woman. That was quick!

Monjeza, who faced family hostility towards his previous relationship with Chimbalanga, said he no longer wanted to be associated with homosexuality.

“I have had enough,” he said. “I was forced into the whole drama and I regret the whole episode. I want to live a normal life … not a life where I would be watched by everyone, booed and teased.”

Chimbalanga, 20, said Monjeza had found a female lover “to hurt” him. “But I am not worried. You cannot force love, and nobody forced him when we did our symbolic wedding in December.”

He insisted that he did not resent Monjeza’s decision. “I will also marry because there are lots of good men around. I will remain a gay,” he told the Guardian.

I guess the good news is that Tiwonge Chimbalanga didn’t get beaten up after her release like we had feared last week.

The bad news is that most of us here know exactly how this feels — being left by the person you love because they want to live a “normal life.” And the terrible news is that most of us here have absolutely no fucking clue — cannot even FATHOM — how it feels to feel any of the other feelings Tiwonge must be feeling right now with Malawi’s current social climate and the laws against homosexuality there and the spotlight on her. Which is heartbreaking/tragic times infinity. (@guardian)

Yesterday was the Iowa primaries, and we have some good news! Republican voters nominated Terry Brandstad instead of his anti-gay marriage opponent Bob Vander Plaats. (@ap)

The chairman of the House Armed Services Committee said Tuesday that he thought the military should keep its ban on openly gay service members in part because he did not want to open a national discussion about homosexuality. The chairman, Representative Ike Skelton, a conservative Missouri Democrat, said he thought the debate in Congress over the proposed repeal of the “don’t ask, don’t tell” policy might force families to explain homosexuality to their children. “What do mommies and daddies say to their 7-year-old child?” Mr. Skelton asked reporters at a news media breakfast.

Why is sexism alive and well at Chicago Tribune?: “The Chicago Tribune thought it was being funny Tuesday when it printed a poster of Blackhawks’ arch-enemy Chris Pronger of the Philadelphia Flyers wearing a dress. Others said it was childish or ridiculous. What it really was, however, was sexist.”