JEZEBEL: Jezebel‘s Anna Holmes is interviewed at Gelf Magazine about Jezebel’s popularity, commenter culture and how a site changes as its popularity grows. She also refuses to take the bait when pressed about the “oversharing” “trend,” concluding that it’s not a “trend” by any means and besides, “female writers who inject themselves into their work — blog posts or otherwise — are more likely to be on the receiving end of nasty attacks and responses” which has always been and always will be. It’s just that now with the internet, it’s faster and more visible and anonymous. Furthermore, she says, “women who do not fit certain molds or step outside the bounds of what is considered acceptable female behavior get torn down. It’s really as simple—and as sinister—as that.” (Also, Jezebel has a new redesign!)

HIPSTERS: Filmmaker in Brooklyn asked 50 people the same question: Where would you like to wake up tomorrow? Even if the sentiment doesn’t grab you, the two girls who want to wake up in Michael Jackson’s “Thriller” will charm your pants right off:

GENDER: Princeton to add gender neutral campus housing option next year: “It’s a pilot program which designates Spelman Hall, an apartment-style housing option for upperclass students (in which, significantly, every student gets their own bedroom), as gender-neutral.” 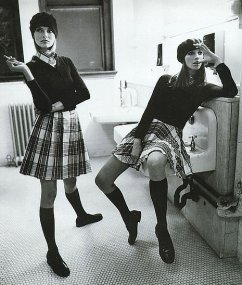 If you ask me, there’s no such thing as too many girls in college. Perhaps this is why no-one asked me, and they did a big fancy survey instead: College Enrollment and Completion: The Intersectionality of Class, Race, and Gender. (@contexts)

Intersexual Female Athletes: Critical Reflections on Sex, Gender, and Sexuality Injustice in Sport: Let’s determine the normal range of testosterone for men and if there are male athletes who naturally produce more than other male athletes—ban them from competition for being “too much of a man”? (@contexts)

VAMPIRES ARE SO GAY: A new article theorizes that the current pop culture vampire craze is driven by girls’ desires to have sex with gay men. A newer article argues that the first article is bullshit.

THE F BOMB: More teen feminists are blogging over at The FBomb. (@jezebel)

SEXIST APP: Alienate Your Female Customers? Pepsi Has An App For That: “Beyond the premise of the app being rather risqué, it’s when you drill down to the specifics that it becomes much more, breaking women down into 24 types and suggesting “lines” to lure each one of them. If “successful,” the app also encourages users to brag about it over email, or even on Facebook or Twitter.”

WTF: As Per Usual, WFT Cosmo?: “Another sure fire way to impress a dude on a date? Act like an asshole. Cosmo advises us to get a free beer “without using your boobs” by grabbing an empty bottle, filling it with warm water in the bathroom then handing it back to the overworked bartender while accusing them of serving you a warm beer. Classy!”