While the rest of the world gather around their twinkling Christmas trees to open presents or sit down to the table for a sumptuous Christmas goose (I don’t know), it’s hard for Jewish or otherwise-identifying people to keep from feeling… well, a little left out. Before Halloween has even passed us by, the aisles of every convenience store are lined with tinsel and wreaths, and it’s only a matter of time before the entire world seems obsessed with a holiday that the rest of us have little use for — and almost everything’s closed, besides movie theatres and Chinese restaurants. Here are some of the ways I’ve spent the 25th of December, presented chronologically.

I am four, and my best friend Jessica lives right across the street. Jessica has a beautiful Christmas tree loaded with beautiful ornaments and candy canes, which I’ve just discovered are my favourite thing ever. Jessica is really excited because Santa Claus is coming to visit her with all his reindeer, and there will be presents under the tree to reward her for good behaviour. All of this sounds amazing, until Jessica informs me that “Santa will never visit your house, because you don’t believe right.” As a little Jewish kid, I continue to tragically believe in Santa for many years, and this particular year I genuinely imagine that I hear sleighbells ringing directly over my house, en route to the houses of all the little goyem on the block.

My aunt owns a party store in New Jersey, and every year the town has a Christmas parade on Black Friday. The streets are always packed with families, which is great for local businesses. Even though Halloween has just passed, my aunt recruits me and my cousins to dress up in costumes and walk around, drumming up business for the store. Inside, my very Jewish grandparents dress up as Santa and Mrs. Claus, because (as they put it) why the hell not? My grandfather gets a kick out of little kids sitting on his lap, utterly convinced that he’s the real deal. Everything is ridiculous. They will do this every single year for my entire childhood. 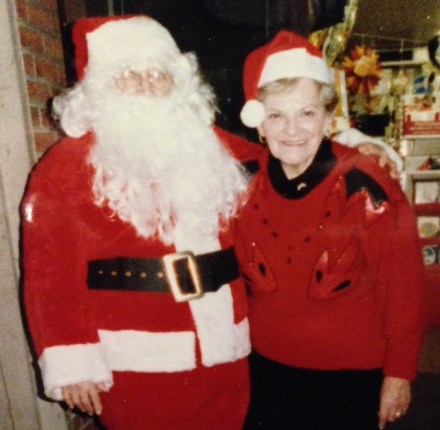 I am twelve years old, and I’ve just had vesicoureteral reflux surgery (it was gross, don’t ask). My parents scheduled it over my Christmas break so I wouldn’t miss too much schoolwork. I’m bored out of my mind in my hospital bed, hooked up to a gazillion machines and high as a kite on morphine. Santa Claus rolls through, visiting all the sick kids and bringing them hand-held Sonic the Hedgehog games. I wonder if I’m hallucinating (I usually am), and jokingly ask Santa why he’s never visited me before. Somewhere, there’s a Polaroid of us together; he stands over me in my hospital bed, characteristically jolly in his standard red suit. I’m so pale that my face matches the starched white hospital pillowcase beneath me. The Sonic the Hedgehog game kinda sucks. Santa never visits me again.

I am seventeen, and I am visiting Internet friends in Canada for the holidays — my very first time outside the country. My friend Kat and I have planned on exchanging presents, but I realize I was completely unprepared for them to be presented to me underneath a tree. Because of this, it officially counts as my very first actual Christmas, and I’m touched by the lengths she and her mother go to to make me feel included. We get these slippers: 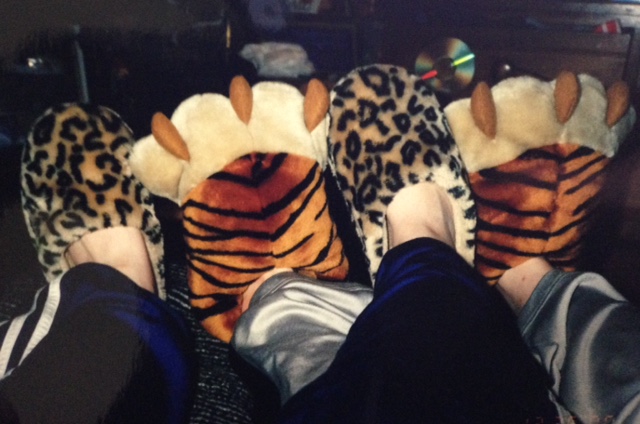 I try to go to my parents’ for Christmas, but inevitably we get into an argument and I end up taking the bus back to Spanish Harlem. On the way home, I notice the Indian restaurant on the corner is open. I order takeout and spend the evening with my roommate’s ragdoll cat, a bowl of bhindi masala and Dreamgirls on HBO. To this day, it remains my favourite Christmas of all time.

I genuinely keep trying to do the Jewish Christmas thing with my parents — Chinese food at their favourite spot at some absurdly early hour, and then a movie, usually of their choosing. We bring my adorable 91-year-old grandmother, who’s a huge fan of romantic comedies and other standard chick flicks. She desperately wants to see Black Swan; she heard it’s a very good movie about a ballet dancer. I have already seen Black Swan and don’t think my sweet grandmother would appreciate it, but she speaks glowingly of that nice Jewish girl Natalie Portman and what a smart, lovely young thing she is. Did you know she was born in Israel? Did you know she went to Harvard? I beg her to reconsider, and eventually we end up going to see The King’s Speech, which is boring if inoffensive. Later, my grandmother will make my parents take her to Black Swan and she will leave me a scathing voicemail, furious about how anyone could make such an offensive picture. She describes it as a “porno.” She will not accept my I-told-you-so.

I’ve recently broken up with a serious girlfriend, and have rebounded with a beautiful, whip-smart babe from Texas who I met on OKCupid. We have little in common beyond a love of stiff drinks, but the whole thing’s still new enough that none of this matters. We spend the entire weekend together, wasted and infatuated. I giddily introduce her to my friends over Thai food, and even invite them to join us for a movie — The Girl With The Dragon Tattoo. I haven’t read the books, but the girl chose the movie and it sounds interesting I guess? My friends both politely decline our invitation, but undeterred we march into the theatre, clasping hands. I buy her a cherry Coke and rest my head on her shoulder. Then the movie happens… aaaand I realize very quickly that maybe The Girl With The Dragon Tattoo was perhaps not the best choice for a romantic date. The film’s uncomfortable treatment of Lisbeth Salander’s sexual assault makes us squirm in our seats, and it doesn’t get much better from there. As the ending credits roll, we walk out of the theatre silently, sort of shell-shocked, not touching at all. We barely nod at each other as we split up to walk to separate train stations. We don’t really see each other much after that.

My best friend gives me a pot cookie as part of my Christmas present. I’m not much for smoking weed, and I’ve never eaten a pot cookie before. She tells me to be careful with it because she had a rough time with hers, but I believe that I’m better at drugs than she is (?!) so I eat a much larger piece than she recommends. Nothing happens, and I’m actually pretty disappointed; I didn’t really have plans for Christmas Day, and everybody I’d want to hang out with is out of town. Forty-five minutes later, I’m lying on my bed, resting my chin on my hands while I absent-mindedly poke around the Internet, and suddenly I lurch forwards as everything around me screeches to a grinding halt. I am instantly so fucking out-of-my-mind high that time itself feels heavy, as though I’m buried underwater. I realize immediately that this is a feeling I do not want, and I sort of wish there was a customer service department I could call to return this unwanted gift — I’d even take store credit at this point, I don’t care, I just emphatically do not want this trip. I have no choice in the matter. I trip miserably alone in my room for several hours that feel like weeks, wishing I could watch a movie or read a book or something. I admit to myself that I am old and lame, and that I will never eat a pot cookie ever again.

We go to a strip club. We kind of hoped it would be sadder than it was, but it’s mostly just a raucous, drunk night out for holiday orphans all over town. One girl who’s presumably supposed to be soliciting lapdances sits listlessly at a table in the corner, obviously playing chess on her phone. Later, during her own pole dance, she will take selfies in the mirror behind the stage.

This year, I will drink this bottle of vegan eggnog my ex made me with cashew milk and rum and probably watch bootlegged movies, unless you’re around and want to get Chinese.

How do you celebrate Jewish Christmas?