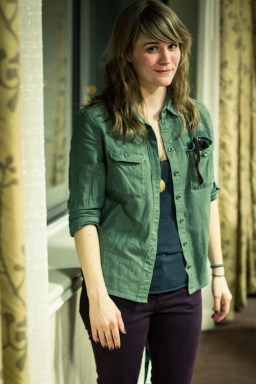 In a letter published today on EveryoneIsGay.com, Brooklyn-based singer-songwriter Jenny Owen Youngs confirmed that she is, in fact, “super gay.” Not only that, she’ll be marrying her girlfriend, Everyone Is Gay co-founder Kristin Russo, in New York over the summer.

In the letter, which can be read in full here, Owen Youngs opens up about why she’s avoided discussing her sexuality publicly until now.

“I’m writing to tell you, among other things, that I am super gay. This may or may not come as a surprise to you. If it does: Surprise! If it does not: You were right all along! Either way: Hooray!

I didn’t want to come out. I don’t want coming out to be a thing that anyone has to do.

A short list of things I’d rather be doing than “thinking about being gay” includes (but is not limited to) writing a song, reading a book, climbing a tree, dancing a jig, and watching Buffy the Vampire Slayer for the zillionth time. Don’t get me wrong – I think it is in the best interest of everyone to strive for a greater understanding of the self. I just wish that being gay (or transgender, or asexual, or fill-in-the-blank here) was as unremarkable to the masses as being left-handed or blonde.”

If you’re unfamiliar with Jenny Owen Youngs’ music career, here’s the ten second summary: In 2005 she won our hearts with the stellar debut album, Batten The Hatches. One of its stand out tracks, “Fuck Was I,” a stirring anthem for the regretful, was included on the Weeds Vol. 2 soundtrack. In 2007 came the Take All Your Clothes Off EP which featured a brillant cover of Nelly’s “Hot In Herre“. In the years following came two more full-length albums, Transmitter Failure and last year’s An Unwavering Band of Light, and tours around the United States and beyond with musicians such as Aimee Mann, Regina Spektor, Motion City Soundtrack, Allison Weiss and Bess Rogers. She’s been followed by an ever-growing LGBT fan base since the debut release, which is perhaps in part due to her talent for writing gender-neutral lyrics that can so so easily be applied to various highs and lows of a lady-lovin’ life.

In the letter, Owen Youngs, who has been attracted to girls since junior high, cites her religious upbringing and church’s anti-gay teachings as an influencing factor regarding her reluctance to come out.

“I’ve come to realize in recent months that a big part of my desire to hide this aspect of myself was rooted in those dusty old feelings: that there is something wrong, something bad, something less-than about being gay. It brings me no pleasure to admit to you that I have felt these feelings…”

“Having a firsthand view of the work that [fiancé, Kristin Russo] and Dannielle [Owens-Reid] do has been inspiring, and has also made me think more critically about my decision. What kind of a message does it send to a teenager when I avoid a question about my sexuality? Whatever the answer, I’m confident that it is no longer a message I am comfortable sending.”

It wasn’t just that deep-rooted shame that drove her decision to stay in the closet. There was also a concern that has been echoed by many, many gay musicians before her – that her personal life and sexuality would become the primary focus of her music career.

“I [was] worried that the first word people would associate with me was going to be “gay” instead of “musician.” I didn’t want a non-musical part of myself overshadowing the musical part.”

Chatting with me earlier this week, Owen Youngs spoke candidly about feeling relieved, but also nervous, about her public coming out moment. (“Hopefully it won’t be a day that everyone will think I’m a horrible monster — not for being gay, but for not being comfortable.”) I’d been curious about the measures she’d taken throughout her career to keep her sexuality on the down-low, and whether it meant distancing herself from the LGBT community.

“One of the most disturbing realizations that I had while coming to this decision to write the letter is that I wasn’t supporting the things that I believed in – things that you don’t even have to be gay to support – just because I had this subconscious fear that if I talked about marriage equality then people would assume that it was because I was gay. That’s fucked. That’s no way to live and it’s super gross and one of the aspects of this that I’m most ashamed of. But I’m also psyched to be able to approach those topics now. In the past year or so I’ve become a lot more comfortable with discussing issues such as gay rights, which is cool because the alternative is super not cool.”

Our conversation turned to that concern of being pigeonholed as a gay artist, and how, when starting out as a musician last decade, she feared she may not receive the same opportunities as heterosexual artists.

“When I started playing music – I’ve been a full-time-ish musician since about 2006 – I could think of maybe 3 or 4 out musicians that were out. That kind of made me uncomfortable. I felt that if I was fortunate enough to actually start to make a career as a musician then I would get grouped in with that handful of people, in a way that in my mind I was already grouping them together, sort of like self-perpetuating ick.

So much of this information is super unflattering to me, but I was concerned [about the impact on my music career]. I was really afraid. So much of that was rooted in a pre-existing feeling that was embedded very deep in me that I, as a human being, am not good at anything, and having this anti-gay born again Christian rhetoric working alongside that… I felt that if people knew I was gay then it would give them a reason to think that I was even more of a piece of garbage than they already think.”

Religion is no longer a large part of Owen Youngs’ parents’ lives; she’s out to them and they’re super amped for her and Kristin’s wedding. Following those frank admissions about feeling a lack of self-worth, she wanted to stress that she really is fine.

“Like many people, I’ve had a lot of feelings over the course of my life. Everybody has their focal points when it comes to the things that they are obsessed with about themselves, the things that get in the way of you developing as a person and mine have been feelings of inferiority and that goes hand in hand with the church upbringing, the gay thing.”

I asked Owen Youngs whether she believed that attitudes towards gay artists have changed over the course of her music career, and whether she still feels that people place “gay” before “musician”.

“The social climate feels different now. People seem a lot more relaxed. I mean, I live in New York City and so there’s the bubble effect of being like, “yeah everyone is so accepting and everything is fine” when there are plenty of areas of America that are still very conservative. Yet same sex marriage laws are passing, it feels like there is one every month. It seems like we’re almost at this tipping point where people are starting to be chill about it.

Now tons of artists are out, casually out, and it’s totally fine. However I don’t think that we’re living in a beautiful utopia or anything – obviously some areas are more liberal than other areas of the planet but as far as the arts community is concerned, at least for musicians, there seems to be less of a stigma. I know of young musicians who are starting their careers now and they’re not in the closet, they don’t even discuss it, it’s just the way that it is. In an ideal world I’d love for nobody to ever make any sort of announcement. I feel weird having even written a thing because, who fucking cares?”

Over the summer Owen Youngs will be holed up writing songs for her next record, as well as working on a few side projects that are in development. I wondered out loud whether, now that she’s come out, we’ll start hearing gendered pronouns in her lyrics.

“That is not something that’s going to change. For me it’s not really so much about keeping out some sort of biographical details, it’s just the way that I write. I leave gendered pronouns out of the equation because I feel like there’s more room for anybody listening to the song to get inside of themselves. I have songs that are about boys that also don’t have gendered pronouns. That’s something that people often notice.”

Naturally, I wasn’t going to let her hang up without naming her favorite Buffy the Vampire Slayer episodes.

“I’ve got a handful. Anything that Joss [Whedon] wrote is one of my favorites. There are the classics, like “Hush” and “The Body” and “Once More With Feeling” are way up there.”

So there you have it. I’m sure I’m not alone in saying that I’m stoked she’s chosen to add her voice to our chorus.