Admittedly, it’s been a minute since I last thought about Jael Strauss, a breakout star from cycle 8 of the world’s best television show, America’s Next Top Model. Like many former contestants of the show, I vaguely recalled having read about her life and struggles here and there, but had mostly forgotten what she’d been up to since that time 50 Cent pushed her into a pool. In 2012, she’d been a guest on a particularly grim episode of Dr. Phil, in which the extremely exploitive alleged doctor confronted Strauss about her quite troubling meth addiction and convinced her to seek treatment.

As America’s Next Top Model returned to television last night with Rita Ora as the host (and a couple of queer women in the running), TooFab caught up with Jael to discuss her current situation and her feelings about the newest iteration of the show. Strauss (not surprisingly) didn’t feel particularly great about her appearance on Dr. Phil’s show – “First of all, I was interventioned, meaning I did not have a choice… I do feel that ‘The Dr. Phil Show’ exploited me and has done that to other people and their addictions. At the same time, I have an inner conflict, because I know that my story has helped so many people. The number one important thing in my life is to help other people, so I wouldn’t change that, but it was not voluntary.”

Strauss says she’s in a much happier place now and that she’s been sober for over three years – “It’s really amazing. It’s a huge miracle to still be breathing after what I was up to and I’m so grateful. Whatever path and twists and turns I had to take to get here, I don’t regret any of them.” She currently resides in Austin, Texas, and works at a rehab center there.

TooFab also asked Jael about Renee Alway, her castmate in cycle 8, who is currently serving a 12-year prison sentence for felony burglary, possession of a firearm and vehicle theft and has also been the subject of much fascination following her tenure on ANTM. As far as we can tell, it was not common knowledge that both Alway and Strauss are both gay women, but Jael clarified that their queerness was one of the many factors that drew the two of them together and helped them find support in one another. 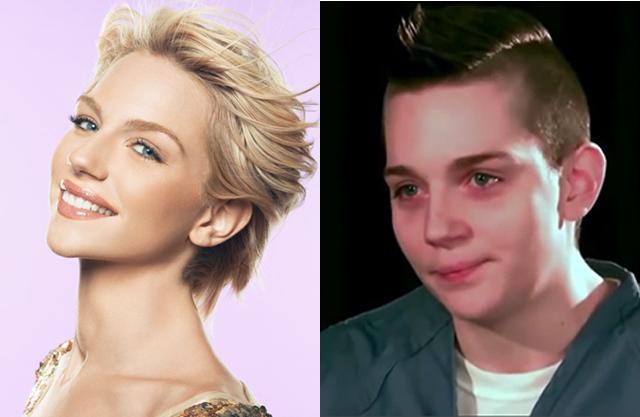 “She was the first person when I got out of treatment and got my phone back … she was the first person that called me. This was before she was incarcerated and she alluded to the fact that she really sympathized with the situation and she understood more than I knew. We’re both lesbians, we were both closeted and we both had drug problems. We spent some time together and got a real relationship. I’ve been in contact with her sister, as well as her since she’s been incarcerated. We just support each other.”

In the second installment of the interview, Strauss discussed the common perception that America’s Next Top Model does little to nothing to help former contestants find work within the modeling industry. She tells them that she’d already lived in Hollywood and worked in entertainment, so she hadn’t been particularly surprised, but that she’d been grateful for the experience. As for her path since the show, she says, “For me personally, I do look at it as a whole as a positive memory, because even traumatic experiences in my life now are some of my positive memories because I survived them and they helped me to build the character I have now. I definitely wouldn’t change anything about the experience. There were low times on the show, but today, I know those things have helped a lot of people in different ways, as well as helped me have some insight into some negative aspects of my life that I was able to change.”