EXODUS INTERNATIONAL:
GLSEN’s Day of Silence is only six weeks away, but Exodus International knows that it’s never too soon to teach kids that, despite what the liberal media and your brainwashed gay-lovin’ teachers might want to tell you, it is sooooo not okay to be gay!

The “ex-gay” mental cases at Exodus International have already launched their “Day Of Truth” campaign to stop students from being taught that it’s wrong to beat up and harass gay kids.

The National Day of Silence brings attention to anti-LGBT name-calling, bullying and harassment in schools. Each year the event has grown, now with hundreds of thousands of students coming together to encourage schools and classmates to address the problem of anti-LGBT behavior.

Exodus International is one of our least favorite non-profit organizations of all time. They run a huge gay conversion industry which includes a camp and conferences and lots of other supplementary materials. 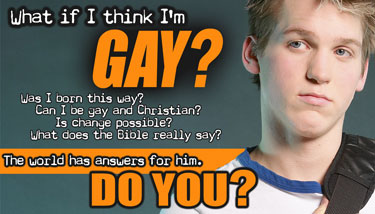 However my primary complaint with Exodus International is that the downloadable press release is in Microsoft Word format. WTF. PDFs, people, PDFs. Secondarily, the FAQ is a giant mindfuck. Reading it you just want Rachel Maddow to dissect it all for you.

Though it would be great to have a peaceful and civil Day of Truth event, many times that just isn’t the case. You may well know that schools are becoming more and more biased when it comes to homosexual issues. Messages about homosexuality are seeping into classroom lectures, and teachers and administrators alike are enforcing one-sided rhetoric. By standing up for what you believe in and sharing the truth you will most likely experience some form of opposition.

HEALTH CARE DECISIONS:
The New York State Senate has passed the Family Health Care Decisions Act, which “[empowers] family members and others close to the patient to make medical decisions for incapacitated patients.” David C Leven, Executive Director of Compassion & Choices of New York said, “Passage of this law is an historic milestone. Health care decisions will now be able to be made by loved ones for thousands of patients, each year, who lack decision making capacity, but do not have a health care agent, primarily those who are dying. In accordance with the wishes or best interests of the patients, unwanted, aggressive but costly and unnecessary treatment which often causes great suffering will be prevented or stopped and care and treatment that is wanted will now be provided”. Apparently domestic partners are included in the list of people who can become surrogate decision-makers; hopefully that means gay people have the thumbs up? (@nysenate) 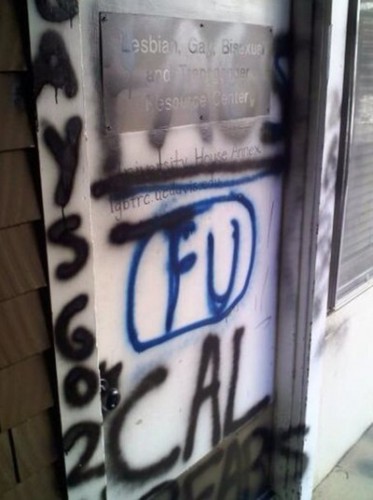 NAACP:
Historically, the NAACP has never taken an official position on gay marriage. But the election last week of 44-year-old Roslyn Brock as chairwoman and the fact that current president Benjamin Jealous is 37 are making some people wonder if that might change – will a generational shift in the NAACP affect their stance on same-sex marriage? (@baltimoresun)

ANTI-GAY CRIME:
On the night of February 26th the Lesbian, Gay, Bisexual, Transgender (LGBT) Resource Center at University of California-Davis experienced acts of vandalism. The entrance to the LGBTRC was defaced with derogatory and hateful words that target the Queer community. (@joemygod)

NOMINATION:
The White House has nominated out lesbian Laura E. Duffy to serve as U.S. attorney for the southern district of California. She led the prosecution team that brought down one of the biggest drug cartels in the state of California. (@theadvocate)

H8:
Did you hear about when Miss Beverly Hills, in an apparent imitation of Carrie Prejean, intimated that gays deserve to die for being sinners? If your immediate reaction was to wonder “What do you even say to that?” you will be pleased to know that this blogger and also Dan Savage have taken care of it for you. (@stylelist)(@firedoglake)

NETHERLANDS:
Several hundred protesters in pink wigs and clothes demonstrated outside a Catholic church in ‘s-Hertogenbosch that refused communion to a gay man. “This dispute began during Dutch carnival celebrations earlier in February, when the man chosen to be carnival prince in nearby Reusel was refused communion because of his open homosexuality… The Sint-Jan church in the city of ‘s-Hertogenbosch, also known as Den Bosch, was prepared for the protest and so decided not to give out Holy Communion during Sunday Mass… The man at the centre of the row has said he just wants equal treatment – if he is regarded as a sinner, he wants the priest to refuse communion to all other sinners too. “ (@bbc)

PROP 8:
On Friday the 26th, Judge Walker of the Prop 8 trial requested briefs from both sides summarizing their points before the closing arguments. Apparently the h8ers have used this as an opportunity to sneak in a few more accusations about gay families that they didn’t mention in the trial. “In papers filed late Friday, lawyers for the sponsors of California’s gay marriage ban offered new twists on their claim that allowing gay men and lesbians to wed could undermine man-woman unions. The potential harms they cited included giving bisexuals a legal basis for pursuing group marriages and unmarried fathers an incentive to abandon their children. “ Unfortunately there doesn’t seem to be any more information on this anywhere else on the internet, so it’s hard to know what this might potentially mean. (@mercurynews)

WWJD:
In an admirable thought experiment, self-described Christian John Shore wonders aloud what Jesus would do if invited to a gay wedding. Believe it or not, it turns out Jesus was a pretty chill guy, and probably would have hit the open bar with you. “One thing that often gets lost in our considerations of Jesus is the degree to which he is exactly the wrong person to piss off. And you don’t have to spend a lot of time in the New Testament before you understand that the only kind of people who seem to ever truly anger him are those who put religious dogma above what he most stood for, which was God’s compassionate will. Around Jesus you can whine, lie, shift your loyalties, be late, be greedy, be too ambitious, be stupid, be a coward, be a hypochondriac, constantly complain, fall asleep at every wrong moment — you can do nothing right, and it won’t in the slightest way seem to offend him. But you put dogma ahead of empathy? You transmogrify God’s law into a justification for denying God’s grace? Then … yikes, man. Then you’ve got yourself a problem no one wants. (@huffpo)

Rachel has written 1116 articles for us.