This week it was announced than in addition to some modicum of acknowledgement from the federal government and some states, gay married couples are now also recognized by the IRS for tax purposes! Taxes are never fun, (I would know – I worked at a tax place for nine years!), but it’s important to look how the IRS ruling will affect those of you who are married. Here’s your quick, handy guide.

Let’s Talk About What Happened

The new Revenue Ruling 2013-17 changed the tax law so that for federal tax purposes, the terms “spouse,” “husband and wife,” “husband,” and “wife” include an individual married to a person of the same sex. If you were married under state law, the term “marriage” now includes same-sex marriage. This applies to your federal tax return no matter what state you live in. So, if you were married in the past year and lived in a state that recognizes your marriage, for your 2013 taxes, you will file both your federal and state returns as Married Filing Jointly. If you live in a state that does not recognize your marriage, you will file your federal return as Married Filing Jointly and your state return as either Single or Head of Household (if you have a dependent). This is the biggest federal change since the Supreme Court DOMA decision.

What’s in a filing status?

The first cool thing about a Married Filing Joint (MFJ) status is that the amount of money you claim for exemptions and for your standard deductions goes up. Exemptions are an amount designated for each dependent claimed and they reduce your tax. The standard deduction is a deduction against your income you can take without having to prove anything. For example, in 2012 the exemption amount was $3,800 per person and the standard deduction was $11,900.

Secondly, if you are in a lower tax bracket, you can change your W-4 form to claim an extra exemption to reflect your married status. This means they will withhold less taxes, and that difference will be made up by the extra amount you get to claim at the end of the year.

This also affects estate planning and gift taxes. Spouses can give cash gifts to each other types of property to each other free of taxes. (Yep, there is such a thing as gift tax, which applies to the transfer of property when you are receiving nothing in return).

What are the downsides?

One of the potential downsides to this is what is called the “marriage penalty;” basically when you combine two incomes, the total income is higher, which moves you to a higher tax bracket. MFJ income tax brackets and standard deduction are not equal to twice the single income tax bracket and standard deduction. The more money you have, the more of it they want, so your tax liability goes up. Currently, there’s a law to help balance out the tax liability if you are in a lower tax bracket (10-15%), but since this law will soon expire, it’s up to Congress whether or not the marriage penalty will affect all taxpayers. If the percentage you owe is higher, the likelihood that you will pay is more, which is why all of those extra credits are so important.

How do you avoid owing money? Firstly, if you do have a significant income, claim less on your W-4, which allows them to collect more taxes from your paycheck, and may help balance out what you owe against what you’ve already paid to the government. If you do own a home, look into filing a Schedule A form to itemize your deductions versus taking the standard deduction. Homeowners can claim their mortgage interest and real estate taxes, which is generally what swings the amount of the deduction in their favor. If it is better for you to itemize, look at the other deductions on this form and keep records accordingly. You can write off a percentage of medical and dental expenses, donations, and job expenses. 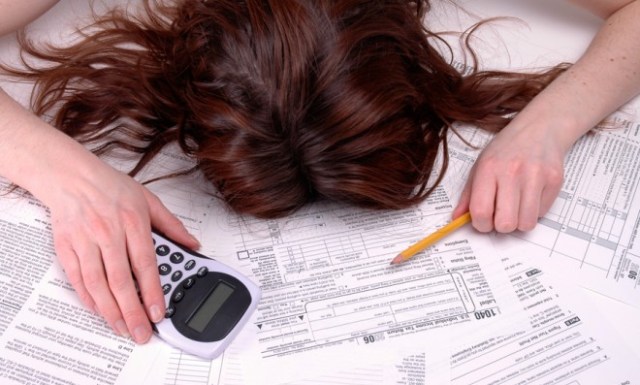 If you are married, it’s important to file jointly and not separate!

Around 95% of the time, it’s better to file jointly than to try to file Married Filing Separate. Did I make that statistic up? Yeah, but let me prove it to you. Because the Internal Revenue Service now recognizes your marriage, if you don’t file jointly, they basically penalize you. How? Married Filing Separate status disqualifies you from a lot of the awesome tax credits you would receive whether you were married or not. For students, say goodbye to your tuition and fees and the student loan interest deduction. Education credit: gone! Have children? No more childcare tax credit. No earned income credit. Also, whatever type of deductions (Standard vs. Itemized) your spouse takes, you have to take that kind as well. So if you own a home and one wants to take itemized to claim mortgage and other taxes, the other spouse loses out big time.

There are special cases with this; sometimes a huge difference in income can affect filing status. Or if one spouse has a lot of tax liability, it can change the situation. If you have a special situation, go talk to a tax professional before you file. (Pro tip: If you walk into a place like H&R Block or any of those franchises, they don’t charge for a quick consultation. Sure, they’ll want to convince you to file with them, but if you go in with a specific question, they’ll answer it).

To the special people legally married before the DOMA decision

Remember how it seemed like the IRS was working really hard to make taxes as complicated as possible for same-sex couples? Well, those of you who were married before this year have the option to make it even more complicated for yourself! The good news is that the extra paperwork drama could work out in your favor. Same-sex couples can go back and amend their federal returns to change their filing status to Married Filing Jointly for up to three previous years if there were legally married during that time. This could mean additional refunds to you, depending on your situation.

My tax-loathing heart goes out to my fellow Californians who could be doing amendments of amendments considering the flip-flopping our state has done about the legal status of same-sex marriage. (Burn forever, Proposition 8). It is a good idea to hire a tax pro or CPA to help you with this.

For federal tax purposes, the term “marriage” does not include domestic partnerships or civil unions. In order to file Married Filing Joint for your 2013 taxes, you must be legally married by the end of the year.

Once you are married you can not file Single or Head of Household on your federal return. (And as noted above, it’s only different if you live in a state that does not recognize your marriage). You must file Married File Jointly or Married Filing Separate. The last thing any of us wants in the mail is one of those confusing, mean letters from the IRS telling us we are wrong and have to do the paperwork all over again.

Also, the IRS already has an FAQs page for this, check it out. Don’t let all of the tax jargon intimidate you. Most of these forms are worded terribly and are meant to confuse you, so try not to get frustrated easily and seek out local tax advisors for free advice.