Indian web series The Other Love Story, about the slow and tender blossoming love of two college-aged women in ’90s Bangalore, has managed to achieve what so much of mainstream television has failed to do: give their leads a happy ending.

Written and directed by Roopa Rao under her company Just Like That Films in part as a “tribute to our teenage years”, the story follows Aadya (theatre artist Spoorthi Gumaste) and Aachal (indie film actor Shweta Gupta) as they strike up a friendship and then a slow burning romance. The series starts off with Aachal on board a train trying and failing to get a hold of Aadya; we then follow the leads’ gentle and tender relationship (narrated in parts by Aadya’s journal entries) built through landline phonecalls, letters, and occasionally playing hooky from class. Eventually and gradually we find out why Aachal is on that train — her family disapproves of the relationship and attempts to end it by sending Aachal off to family in the United States.

It is only in the very last moments of the very last episode that the tension breaks: Aadya surprises Aachal in the train after it leaves the station, having hidden in it the entire time after receiving Aachal’s sudden goodbye call. The series ends with them riding off happily into the sunset (though presumably not onwards to the United States together, because getting a visa is extremely difficult even when you don’t have a deadline of a few hours. But one can dream.). 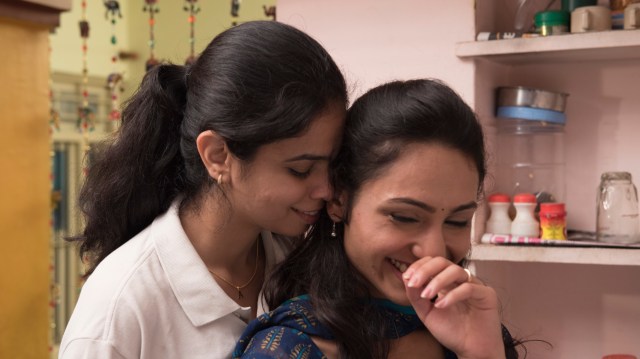 Despite the various difficulties the crew faced through production, such as potential actors dropping out after their families objected to them acting in “porn”, Rao and her leads Gumaste and Gupta were consummate professionals throughout the process. Their behind-the-scenes clips feature a lot of discussion on respecting and honouring the spirit of Aadya and Aachal’s characters and relationship, building a love story that truly transcends gender expectations. One particularly charming anecdote relates to the “intimate” scene, a very sweet and affectionate make-out scene between Aadya and Aachal: apparently they hadn’t heard the crew call “Cut!” and kept on going for some time after the cameras stopped rolling! You can tell from these behind-the-scenes interviews that everyone in the crew really cared about the story and about the characters’ journey, working really hard to honour their love and treat their story with respect.

Cast and crew of The Other Love Story, including director Roopa Rao and leads Shweta Gupta and Spoorthi Gumaste (4th, 5th, and 6th from left front row)

As a queer South Asian born and raised in Asia to immigrant parents, finding any representation of myself in any form of media was difficult. Most media I found with queer relationships were Western, hardly ever featuring women of colour — let alone South Asian women. Meanwhile, most Bollywood films, or any other Asian media accessible to me, would center relationships and depictions of women that felt alien to me. Films like 1996’s world-acclaimed Fire, which had a happy ending for the lead couple Radha and Sita, were rare and not easily accessed.

The Other Love Story was such a breath of fresh air in many ways. Aadya and Aachal felt like any other regular person: they were not coded Butch or Femme, like too many of these stories tend to do, and neither were overly Westernized nor overly exotified. They just were. While we don’t share the exact same experience (I didn’t grow up in 90s Bangalore, for starters) there were many elements of their lives that seemed familiar: the fashion, the hours spent with friends on the phone monitored by our parents, even the accented English. They felt like they could be my cousins — and cousins are still family, after all.

In a year or two that have marked severe attacks on LGBTQ people like me, such as the murders of Bangladeshi LGBTQ activists Xulhaz Mannan and Mahbub Tonoy with very little investigation by the Government, or the Pulse Orlando shooting, or even the 2013 staging of anti-LGBTQ State-sponsored play Asmara Songsang in Malaysia, having relatable representation that showed adorable happiness for people like me was healing. I didn’t need to conform to anyone’s expectations of being a Good Woman or Good Queermo, whether that came from my cultures of heritage or from queer culture. I could just be myself, and find love that way.

Roopa Rao’s win as Best Director at the 2016 NYC Web Fest, and the success of the series overall, shows that queer love stories like these, especially from marginalized communities, can succeed — and can especially succeed when given happy endings. There was no need to create drama through death, overly used as a cheap trope in romantic stories (star-crossed lovers! how tragic!). Aadya and Aachal’s story had enough drama, compassion, love, humour, and charm for us to relate to and find enjoyment.

The Other Love Story can be watched for free on YouTube or rented or bought on Revry. The series is primarily in English (with some Hindi and Kannada), with English subtitles.