The queer internet has been in a panic for the last day or two (or the last several months, depending on how you see it) regarding the nature of the relationship between one sullen actress Kristen Stewart and one Victoria’s Secret model Stella Maxwell. Romance rumors have swirled around the pair off and on for months, but they’ve also been visibly involved with other people for quite some time and to be fair, just because a pair of women are seen together it doesn’t necessarily mean they’re more than friends, right? Sometimes a pair of gals are actually just pals! Sometimes a lady needs queer community. But before we dismiss this story as mere speculation, let’s take a closer look at the timeline of these stories and see if we can’t paste together some semblance of an answer.

In May, shortly after splitting up with French actress/singer Soko, Kristen was spotted leaving a Met Gala afterparty with Stella. Tabloids claimed that Stewart and the “outdoorsy” model (previously linked to Miley Cyrus) had clearly hooked up, which even then was difficult to verify. Just a few weeks later, Stewart’s ex girlfriend Alicia Cargile appeared on the Cannes red carpet, politely holding Kristen’s sneakers – an iconic moment in Vapid Fluff’s brief history. The pair seemed to reconcile, and all was right in the world until late August, when the gossip mill announced that Cargile and Stewart were no more, and that Kristen had been seen about town with Cara Delevingne‘s recent ex, Annie Clark (are you still with me?)

In mid-October 2016, Kristen and musician Annie Clark were seen leaving the Bowery Hotel in Manhattan together, with Stella in tow. At the time, the press was very focused on the (still unconfirmed but like, pretty obvious) relationship between Annie and Kristen, and Stella just seemed like a friend along for the ride.

Now, things are much more confusing. Just a few days ago, Annie Clark confirmed that she had done the score for Come Swim, a short film directed by Stewart; the pair seemed to have settled into an easy, functional, mutually beneficial relationship. However, the pair were noticeably being photographed together much less, spurring rumors that they may have already split up. At the same time, photographers captured Stella visiting Kristen on the set for her new film, a historical piece centered around Lizzie Borden (filming in Savannah, GA for some reason). 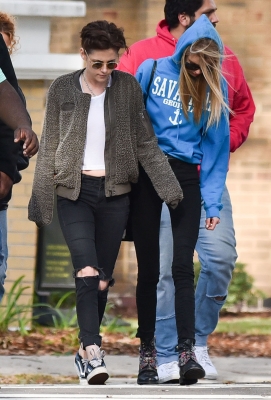 Just some gals being pals

Looks a whole lot like the way famous women walk next to their girlfriends to me, but what the hell do I know? They’re not even holding coffee or dragging suitcases. According to Inquisitr, “Whoever Kristen may be dating now, it is clear that she won’t be looking at men anymore,” so there’s that.

As for Annie, well, she and Cara have been pretty friendly for exes, but they were spotted at a museum together yesterday… possibly holding hands? Body language expert Carolyn Yates agreed: these two are most likely still into each other.

We here at Vapid Fluff HQ will remain dedicated to this story and will keep you posted as details pour in. As far as we can tell, Kristen Stewart shall not rest until she has dated every queer woman in all of Hollywood (and we’re all for it).