People — and by “people” I mean “right wing media, and those who watch them” — tend to get very uncomfortable when talking about children and gender. This is especially true when talking about boys dressing up as girls for Halloween, which is tied to how culture undervalues femininity.

Luckily, no one gets upset when girls dress up as Batman, because: it’s Batman, how could you be upset? Unless an eight year old dressing up as Batman in your immediate vicinity ran around chanting, “I’m Batmannnnn!” and jumping from the third step of every staircase, wings spread, which was by no means how I spent my childhood.

Superheroes Are For Girls, Too is an adorable tumblr that aims to celebrate such moments. Some of the photos are depressing, because the kid’s parents are clearly doing the six-year-old-appropriate version of wearing a dress (tutu) and one costume element (Superman crest) and pretending you’re dressed up. But most of them give me hope for the world. From the site:

Superheroes aren’t just for little boys. Here you’ll find lots of images of little girls from past and present who also love them. You may submit pictures you’ve taken or pictures of you or a relative. No pictures randomly pulled off the net, please. Girls dressed as superheroes, meeting superheroes, reading superheroes comics are all welcome. 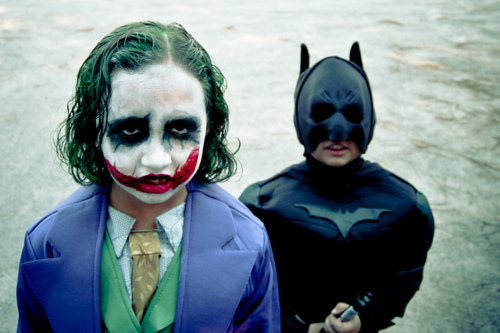