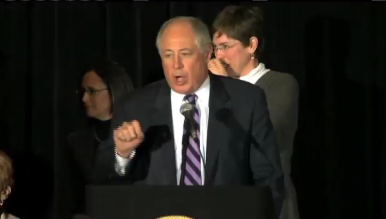 In front of a thousand-strong crowd at the Chicago Cultural Center, Governor of Illinois Pat Quinn signed civil unions legislation today. He referred to the state being “the land of Lincoln” and then totally one-upped the Lincolnosity of the event by quoting Abraham Lincoln who said, “We’re a government of the people, by the people, for the people, and it shall not perish from the earth.”

Greg Harris, the gay state representative who sponsored the bill, reminded everyone that civil unions were a step forward but not the final goal, which is obviously marriage equality. “There is more work to be done,” he said. “Things can get better.” I feel like “it gets better” is going to become a viral catchphrase of this decade or maybe it already is. Anyhow.

Starting June 1, same-sex couples will be able to get a civil union certificate at their county clerk’s office, which should enable them to get the same legal treatment of heterosexual spouses under Illinois laws. This includes 650 state rights, benefits and protections currently inaccessible to gay families.

Equality Illinois says: “Today’s signing is not the end of the fight. State Rep. Deb Mell (D-Chicago), one of two openly gay members of the General Assembly, reiterated in an interview Friday that she and her partner can still not marry in their home state and will travel to Iowa for that right. The civil unions bill is a proud moment in Illinois, but it is also a reminder that more is needed before equality is achieved.”

This historic day comes just in time for the life-threatening blizzard to arrive and immediately slaughter the Chicago area with hyperbolic windstorm vocabulary of epic stormy freezing cold dangerous blustery impenetrable unstoppable strength, power and venom. A blizzard warning remains in effect from Tuesday afternoon through Wednesday in several counties and should begin Tuesday right around noon. The National Weather Service is calling the pending blizzard life-threatening.

So! Back to the ceremony, Deb Mell, Illinois’ other openly gay state legislature member, talked about how being out and telling the story of her relationship with her fiancée, Christin Baker, was “one of the most powerful things we could do.” Lt. Governor Sheila Simon said “I hope that other states will join us and I hope the federal government will join us as well. Full equality is not too much to ask for.”

Also, Britney Spears was a bridesmaid at her friend’s gay wedding this weekend, just fyi.