Last Thursday, I woke up like I usually do: annoyed. But it wasn’t for my usual reason, that my cat, President Bartlett, caught a case of the zoomies every hour the night before. It was that for some reason I woke up still plagued by the existence of the mid-2000s Showtime original series The L Word. I took it upon myself to do some Big Gay Soul Searching (LOGO this fall) and I realized one of the most annoyingly unrealistic things about the show was everyone’s constant morning presence at The Planet. 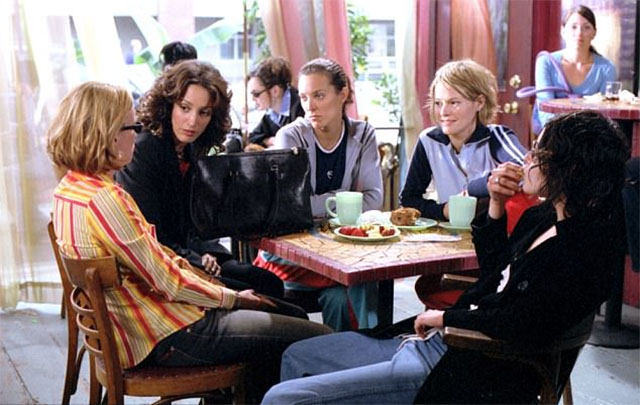 We’re talking every morning. Some of them worked in Santa Monica (Shane?) and only popped in for a minute, just long enough to get a shot of espresso and take a few joke-shots at Alice’s sexuality, then get back on the road. (Shane, why?)

To clarify, they willingly drove to The Planet modeled off Urth Caffe in WeHo, which is adjacent/close to actually nothing. So these adults, most of whom had real jobs, went out of their way early af in the morning to maybe see their friends for a second. 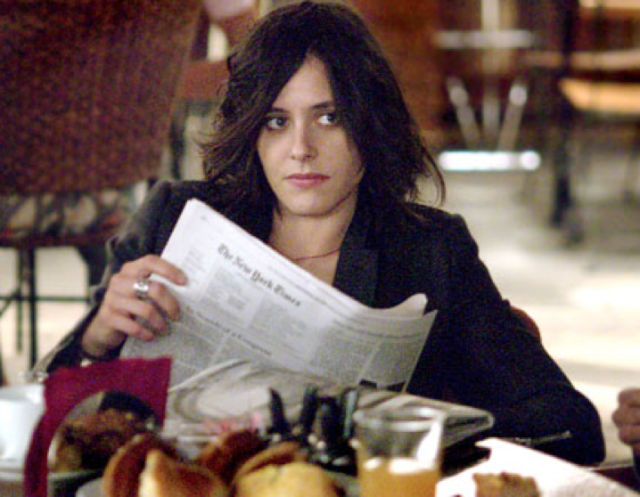 Obviously I had some questions. Most re: logistics. Did they all coordinate the night before who would be there? Was there a standing plan to be at The Planet every morning no matter what? Did Kit have a table constantly reserved just in case? Either way this kind of commitment from anyone in LA seemed genuinely insane.

I needed to know how they did it. I needed to see if the “way that we live,” was a way that I could live. So, I decided to force my friends to reenact The Planet as a fun, very normal friendship challenge.

Since The Planet doesn’t actually exist (Sad!), I picked a new LGBTQ coffee shop in Hollywood called Cuties that was equally difficult for the whole group to get to.

My first challenge was actually getting people to show up. I’ve lived in Hollywood long enough to know that the only way to get anyone, even your best friends, to do anything is to pretend it’s a job, so I drafted up a contract and forced my friends to sign! 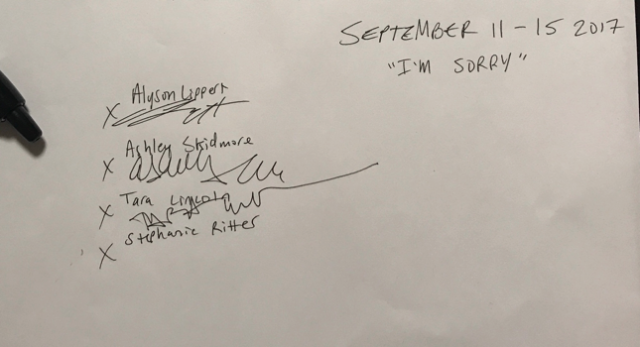 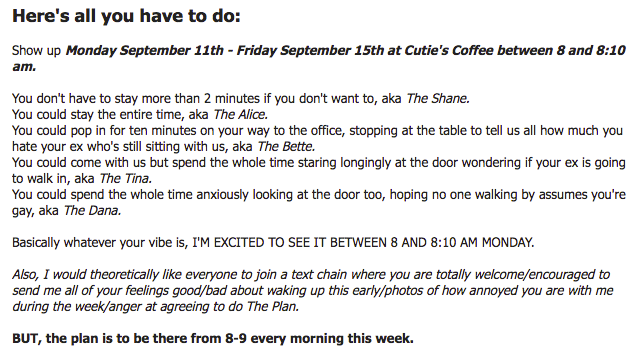 I informed the regulars that I would be “sending some informal texts to a handful of other lesbians this week who may appear at will” as guest stars to keep things exciting.

The only email I got back from the group chain:

The guest stars were a bit more responsive, but I could tell everyone was equally excited to be my friend!

And my personal favorite,

I actually woke up pretty excited to start testing the limits of my friendships. This was by far my most obnoxious bit since it involved: a) early mornings, and b) driving. BUT, I figured the promise of free coffee for my top three friends each day would be enough to keep people my friends/happy to see me.

Around 7am, the excitement started pouring in! 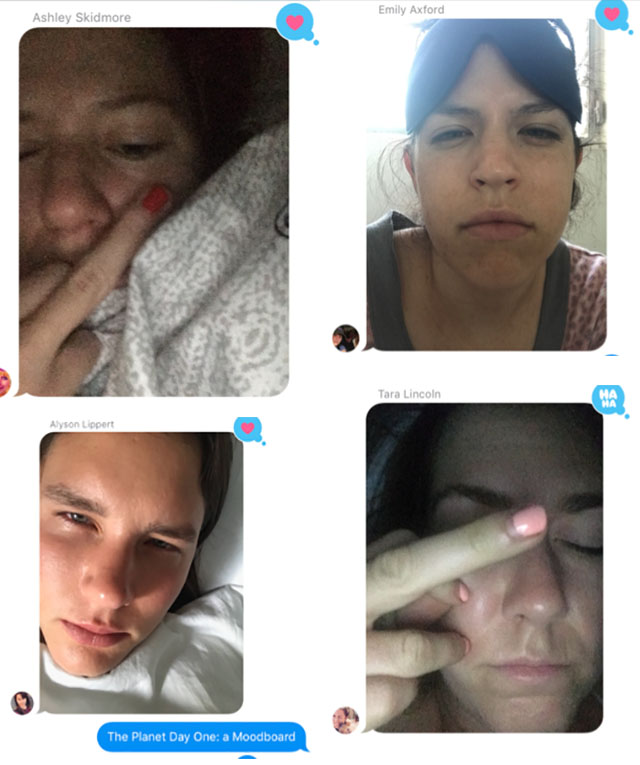 It’s safe to say day one was kicking off GREAT. However, The Way That We Live is not actually a good way at all, it turns out, until I buy the first three attendees coffee. Then, moods start to rise.

In true L Word fashion, we had a lot to catch up on: one of the girls had just broken up with her girlfriend and joined approx. 1000000 straight dating apps. I had been set up on a quasi-blind date more than a year ago that I had gone on the night before. Quasi-Blind Date also decided she may or may not be popping by Cuties for a surprise visit (attack?) during the week, so tensions were PRESENT. Also Emily started her period.

The excitement of the newness was enough to liven up the Monday morning. Plus, even though Emily’s uterine walls were joining the party, seeing a bunch of queer people first thing in the morning helped all of us deal with the overwhelming number of men in every public space.

Everyone showed up within the 8-8:10 time frame I breezily insisted they agree to, and we were off to a great start! We were a little less exhausted, but we had a lot to catch up on from the last 24 hours. We all got our coffees and settled into our new routine, trying to assert our dominance by deciding which characters we were most similar to. One friend continued to insist she was the Shane, though on day one, I accidentally took the title, despite my truest desire to be an Alice/Lara hybrid. But genuinely none of this matters because then A NIGHTMARE IN A VEST WALKED IN and we all started screaming. 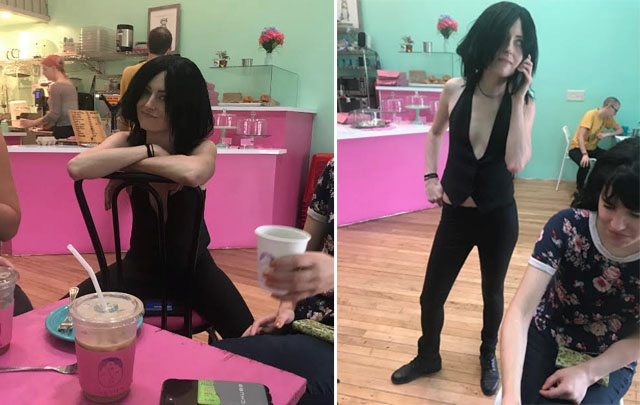 Julie appeared as full pilot Shane, including a wig she bought/cut terribly just for this.

She looked so much like Shane that our two token straight women (pictured) were actually giddy.

This helped soften the blow when one of them was #blessed with not one but two tickets from an overzealous parking enforcement officer who eyed up the car harder than Dana ogling literally any woman that walks into the Planet/her general vicinity.

Our first guest star really hyped up the energy even though people were exhausted. Also Julie starting her period made our count hit two for two, which felt pretty appropriate.

Are we The L Word: Shane.

Ok so day three we were FEELING IT. Emily was still reeling from her two ticket Tuesday and everyone was starting to get genuinely upset at me for having to wake up at 7am again.

My period came. At this point, we were all horrified to see what Thursday would bring, since every day was feeling like 127 hours. Wednesday also brought the first person to break the contract. It was Tara, who “had to get her cast off” because she’s “getting married soon” and wasn’t going to “ruin her wedding” for my “stupid bit.” But to her credit, she did FaceTime in, so. 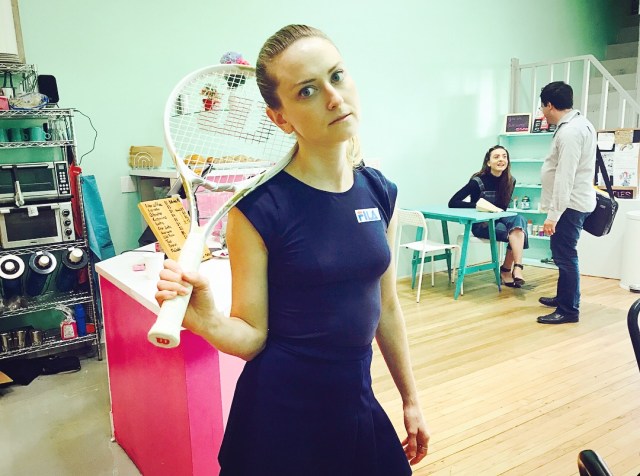 Julie continued her bit of dressing as characters at their best and showed up as a post doubles practice Dana (sans Harrison).
Original Moods: 2/10

People are starting to hate me but are still happy about the free coffee.

Are we The L Word: Yes, because despite two tickets, three periods, and one cast removal, we all pretty much showed up. And can you even ask anything else anymore?

Day four brought no more periods. Three came in so strong and then zero? Delirious from the lack of sleep and four days of mainlining caffeine through my veins, I started doing my own investigation. Could our alpha period have switched? Is Emily our alpha? Is Ilene?? I began my hunt with as much vigor as Lucy Lawless investigating Jenny’s murder: none.

After asking two people the barest minimum, I learned the series regulars (the people I forced to sign a contract) who hadn’t started their periods all have IUDs and don’t have periods. So. I’m choosing to believe that modern science was the only thing keeping all of our periods from syncing up.

Highlights of the day included: Julie appearing as Jenny after she fucks Marina in that shed(?) and Tim drags her to Vegas to get married in her dirty sex tights.

Moods were VERY low. A soft Bette in suspenders and Vegas (Tahoe) Jenny were big hits. Then, a special appearance by our friend Brittani Nichols solidified Thursday as the Day Not to Miss. Zero new periods but also Zero new tickets! However I got served whole milk in my latte and I had three sips and I’m still shook. RIP.

Friday morning my cat decided he was done with this. He gave me this look as I left and I considered bailing. 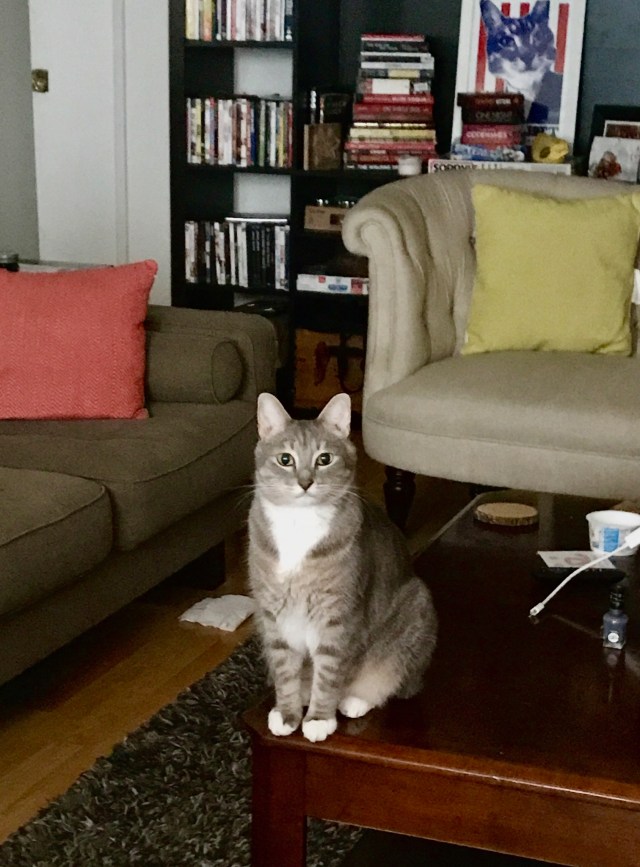 BUT, I didn’t! Honestly, by 8:10, we were so out of it. Especially because, just like on The L Word, most of us continued to hang out at night. We learned that seeing each other every morning and night gives you nothing to talk about six hours later when you see each other again. We all made idle small talk about something. Dreams? Dogs? Nothing? Genuinely only a miracle could save this day. And then it did.

So many guest stars showed up including a dog(!!!), Business Bette, a million months pregnant Tina, that crazy girl Lacey from the pilot (with flyers) and did I mention the dog? My day was made, despite the collective eight hours of sleep I’d gotten through the week. 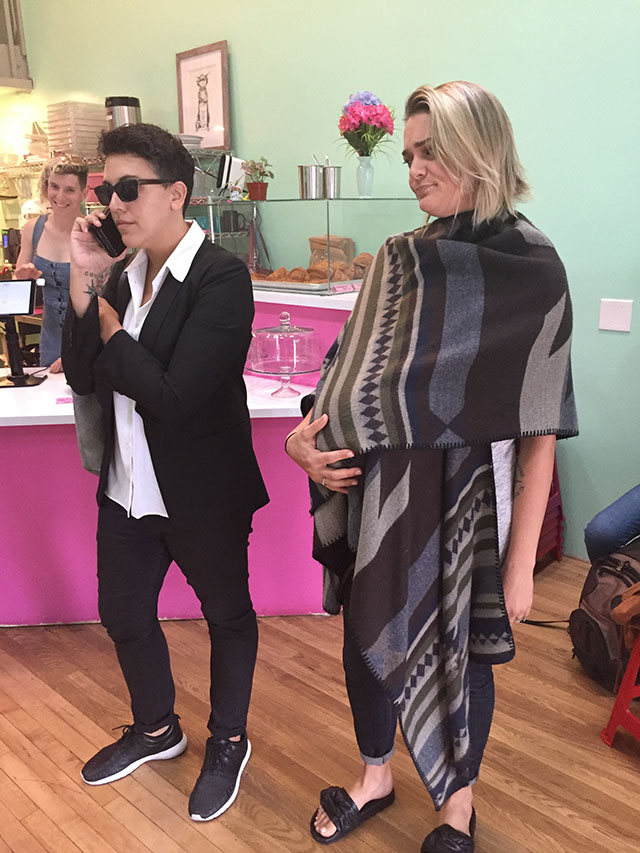 Julie came in costume again, as another of my least favorites: Lacey. Videos of her 100% accurate portrayal available on request. 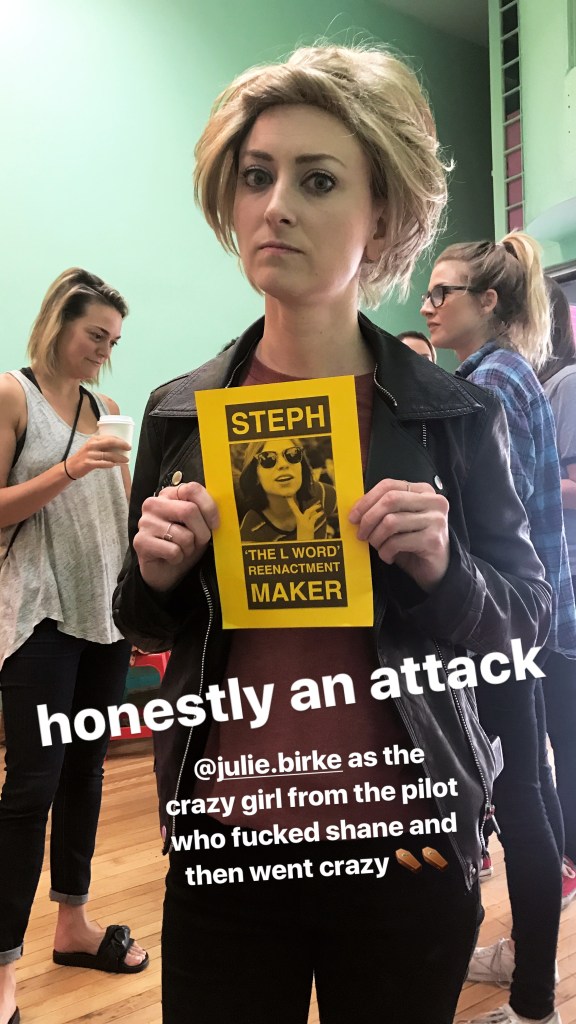 Others showed up in costume as well. Including our favorite characters like ‘generic lesbian background actor.’ 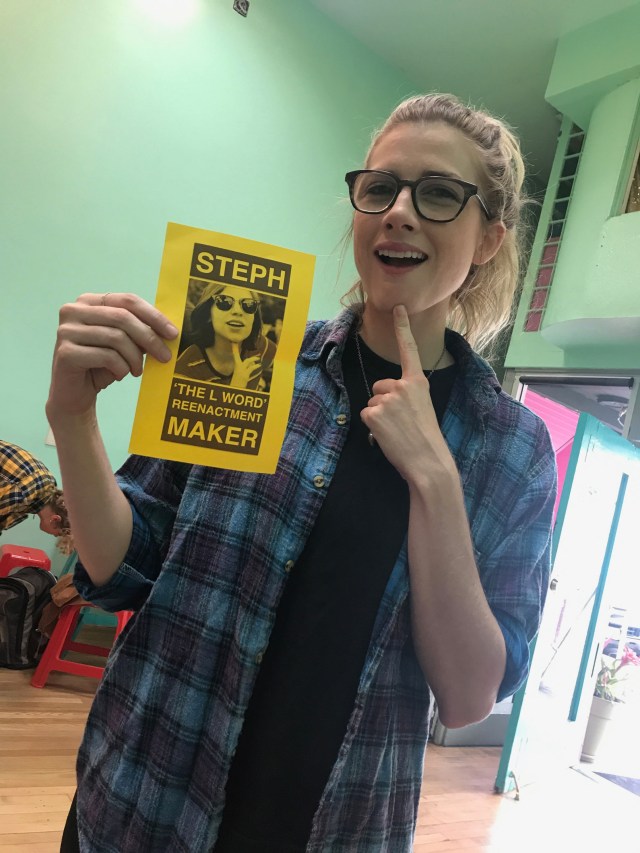 But seriously so many queer women showed up, it felt like a fever dream.

Original Moods: 4/10 (mainly because people were so glad it was almost over)

Moods at Cuties: 30/10 (I now see why The L Word brought on so many guest stars through the years)

Are we The L Word: Sadly, yes.

SO, after Friday’s meeting, I checked in with my contractual series regulars to get everyone’s takes on the week. How highly they’d rate it, how likely they’d be into doing it again, and how much they all hated me.

Here are their replies:

+ Honestly, I would def do again. 9/10, losing one point for the fact that you told me not to watch The L Word when I clearly should have watched The L Word.

+ I was thinking we needed to keep it up for AT LEAST one more week.

+ Love you more than ever and I would absolutely do it again.

+ I’d rate it a 9 because waking up never got much easier and I wouldn’t have been able to do it every morning had I not signed a contract. BUT it still gets a high rating because I got to spend every morning with my friends, except for you who I now hate. JK, JK, JK even you. I do not hate you. I think this was one of your best ideas and I’m going to miss doing this every day.

So everyone… didn’t hate me. OR SO I THOUGHT.

BECAUSE come Wednesday, guess what happened?

Two of us showed up! Proving that literally no one actually wants to be accountable for anything in LA. Unless there are Instagram stories, free coffee, signed contracts, etc.,

However, let it be known that two guest stars have sparked a spin-off series. They appear Fridays at Cuties. Be sure to tune in for special appearances by me and other accidental guests.

ALSO the final unexpected side effect of the week is:

Stephanie Ritter is a writer/comedian/Instagram dog-stalker who just started watching The 100 and is already highly regretting her choices. She co-hosts a podcast about the dogs she sees each week called Dogs We Saw This Week with her friend Anne. You can find her online on twitter.com or instagram.com (@stephanieritter), at work in her writers’ room, or at home in West Hollywood. Please don't do the last two.

Stephanie has written 2 articles for us.