Tread carefully, mild spoilers for Light as a Feather afoot!

I think October is my favorite month because content gets ten times spookier and I’m here for it. I’ve always loved horror movies, from legitimately terrifying like Hush, to sci-fi scaries like Sinister, to fucked up like Saw, to slashers like I Know What You Did Last Summer. I even love the ridiculously bad movies (I once watched one about Bloody Mary that was truly hysterical… to me; my friend was hiding under the blanket the whole time). So one of my favorite trends that started a few years ago but seems to be picking up this year is a lot of networks are giving us Spooky Content in TV form. And also, it seems to be addressing my biggest gripe about horror films, which is: remember queer people exist. (Shout out to Neverknock, silly sci-fi SYFY movie with lesbian leads.)

So when the opportunity came to review the Hulu Original Series Light as a Feather, I didn’t hesitate. I knew nothing about it except there was a queer character in it somewhere, and of course my personal experience with the game. And the general distilled concept: “Five girls play Light as a Feather and there are consequences.”

The season is ten episodes long, and each with only a 25ish-minute run time, which I thought was really interesting for a drama series. (And there’s no denying it’s Dramatic.) I guess since it’s a Hulu series that’s dropping all at once, they treated it as something between a webseries and a TV show? I think, for this show at least, it worked really well. The short episodes are jam-packed and more filler would have just turned it into one of the later seasons of Pretty Little Liars. 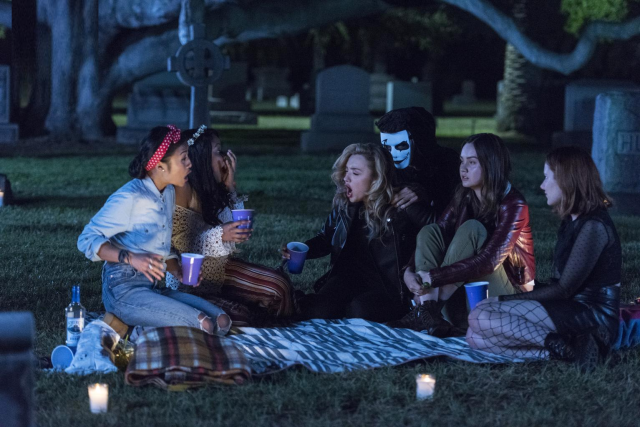 Boys ruining everything AS USUAL

Which brings me to my next point: It did give me Pretty Little Liars vibes, but like if PLL was more supernatural and more… serious. (That was probably my biggest complaint about Light as a Feather: there aren’t any JOKES. And like sure it was life and death and everyone was stressed, but, not unlike PLL, they still found time to have Boy Problems.) But it also had a touch of The Craft and a hint of Final Destination, which I know are movies, but it had a witchy friend-or-foe element and a trying-to-escape-fate situation.

We open on a group of friends, made up of four girls who’ve known each other since they were wee, and a new girl, Violet. They’re playing Light as a Feather in the graveyard, because it’s Halloween tradition. Much to my delight, Violet is played by Haley Ramm, who also played bisexual teen Brenna Carver in Chasing Life. Violet suggests they level up Light as a Feather and instead of just lifting a friend with ~magic~, a “leader” predicts everyone’s death as they’re lifted. Three of the girls (Olivia, Candance, and Alex) get predictions that are spooky and specific, made more eerie by being in a cemetery on Halloween. But Violet can’t read the main protagonist, McKenna. The show does a good job of establishing the friends and their dynamics right away, and also letting us know their lives were dark before it started, because McKenna (who confusingly goes by a ton of different names; she calls herself Mack on her own voicemail but everyone around her seems to call her Kenan?), has a dead sister. 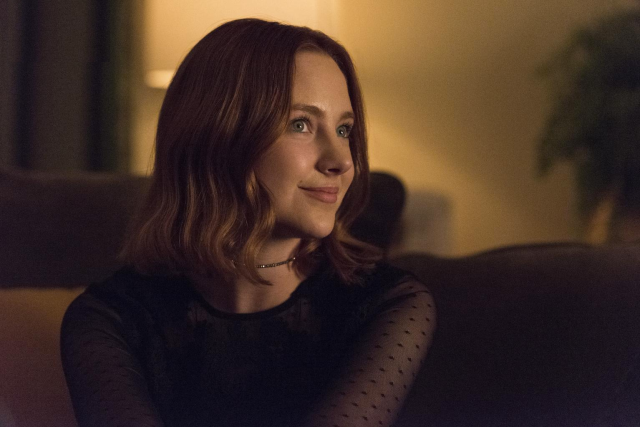 Sadly Brenna did not slap any biophobes with a book this go-round.

But I know what you’re here for: Alex, one of the original friends, is a lesbian! She’s played by Brianne Tju, and is super cute. Right off the bat she’s talking about bringing a girl as her date for Olivia’s birthday party, and mentions an ex-girlfriend named Kimberly (who never comes into play). Aside from the date, who never speaks a single word and is gone after the party, there’s technically only one other indication that she’s gay (in shop class she makes a comment about not being automatically good at it because she’s a lesbian), but she remains a lesbian the entire time, which honestly feels like a win to me, even though technically that makes her the only one of the five girls without on-screen romance drama. (In one of the later episodes, a line of dialogue mad me wonder if she was dating the now-dead sister, but that might just be me digging.)

What I liked about Alex is that she wasn’t just a lesbian. She’s a dancer and she has a through-line issue that I won’t spoil because it becomes relevant to the plot. She’s out before the show even starts, and her friends are obviously all fine with. As the show goes on, we learn more about her. She gets scared and determined and does her darndest to help solve the mystery. She’s incredibly relevant to the plot, and has her own dynamic with each of the other girls. Plus her name is Alex, giving her automatic gay points. (I’m going to put one major spoiler about her at the end of this review if you feel like I haven’t answered your biggest question.) 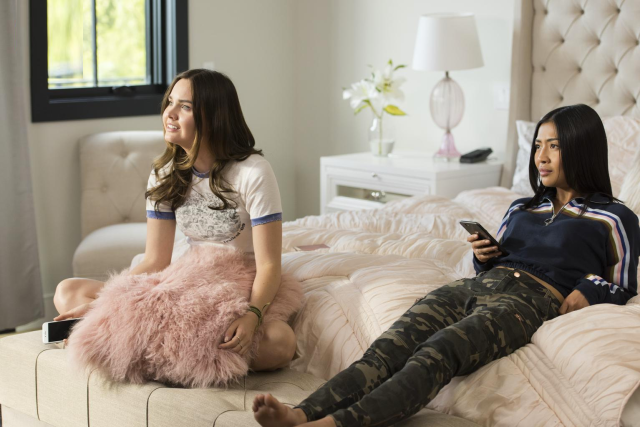 Overall, Light as a Feather is fun in the way overly dramatic scary movies can be. The dialogue felt realistic and not too GLASS IN MY HAIR, and the characters felt fleshed out instead of the caricatures of stereotypes horror films can sometimes deliver, which might be a perk of this being a series instead of a movie. The mythology is… strange. It’s one of those things you can’t think about too much. During some of the exposition I found myself getting frustrated that the characters weren’t asking what I perceived to be obvious questions, and there was at least one major thing that went extremely unanswered, but this isn’t the kind of show you watch for a demonology lesson. You’re in it for the action, for the adrenaline rush that comes with fearing for a fictional character’s life, the thrill of rooting for someone and yelling at them for not writing the ENTIRE MESSAGE IN THE TEXT JUST IN CASE, etc.

The ending was mostly great. It had one cliffhanger typical of the end of a horror movie (those things are never closed loops), but also one open mystery that felt like a BOLD MOVE for a show that hasn’t been renewed for a second season yet. I feel like usually horror content ends in a way that leaves it open for more, but also closed enough that if it’s standalone, it’s still satisfying. This one left one door open the perfect amount, but then was like, “Oh hey SURPRISE there’s another door and you have no idea where it leads and now it’s wide open.” That said, I’m curious enough about it that I found myself hoping they have a second season so that avenue can be explored. 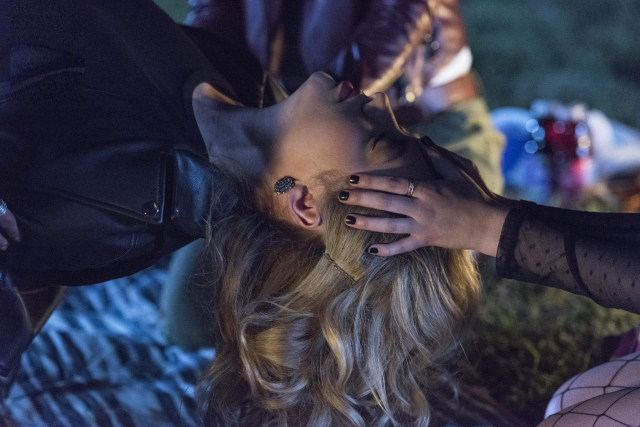 “Is this how lesbians have sex?”

All in all, the show isn’t going to give you as many nightmares as Channel Zero but it also won’t make you roll your eyes as much as Riverdale. It’s a fun romp in the graveyard, and exactly the kind of spooky content I love to binge in October.

Okay now I’m going to give you a major spoiler so if you’ve already decided whether or not you’re going to watch it, jump to the comment section now!

The lesbian lives! Despite people dying and disappearing left and right in the chaos, Alex survives ’til the end of this tale. It wouldn’t have even technically counted as Bury Your Gays if she died, I don’t think, since she would have been one of many to meet a gruesome death and that was the whole point of the show, but boi oh boi was I relieved when she made it to the end. I won’t tell you more about how or if anyone else survives with her, but I just thought that might be holding some of you back, so I wanted to assuage the fears of those who needed to know, even though it kind of reduces the purposeful anxiety of some of the scenes of the show. Go forth and watch with confidence, my friends!