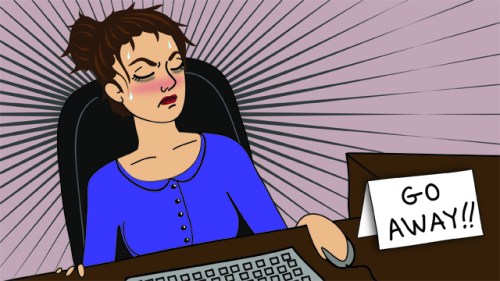 Everyone has the occasional terrible, horrible, no good, very bad mood. Unfortunately, your mood doesn’t necessarily cooperate with your career or social calendar, and one of the terrible secrets of being a grown-up is that you can’t blow important people off without engendering their disdain and ultimately harming yourself. But don’t worry! You can MacGyver your way through having to hang out with dumb jerks you hate, crabbypants.

Bad moods aren’t always your fault. Sometimes a cranky mood results from actual bad things happening – having only $20 in your checking account until next Friday, or trying to go on two hours of sleep because your 22 year old sister and her two girl friends who are in town visiting from Minneapolis locked themselves out of your apartment and ran out of cell phone battery after trying to call you a half dozen times at 2 am and then went back to some stranger’s apartment in River West before returning at 5 am smelling like the beer they sell at Cubs games, for example — but other times, the only thing you have to blame for your bad day is your own shitty attitude, which is infinitely fixable.

In the run-up to you and your negative energy cloud’s dreaded presence at a social event, lay the groundwork to feel as good as you possibly can, given the circumstances. Treat yourself to a good cup of coffee in the morning, but don’t over-caffeinate; that can only lead to shaky hands and that dreadful generalized anxiety and paranoia that comes from watching your first David Lynch film, or that feeling you get when you see a plane flying really low over a stadium. Eat some breakfast, and continue eating small amounts of food every few hours throughout the day (fluctuating blood sugar levels can be blamed for some crankiness). Eat fiber and avoid carbohydrates, as they can lead to wacky moods as well. And don’t do hallucinogenic drugs before an important social event, unless you are a character in a hilarious coming-of-age sex comedy. If you have time, exercise — a brisk walk over your lunch hour might help you perk up. I’ve also heard rumors that having yourself some of that sex is a good stress reliever, and if you don’t have a sex partner on hand, try taking matters into your own hands. Or hand.

PMS is a somewhat different animal. Contrary to popular belief as expressed via geriatric male stand-up comedians and gag birthday cards bought at Spencer’s Gifts, PMS isn’t characterized by a transformation into a crazed ladymonster. For most women, the days before we feel like buckets of blood and the whole world about to be our Carrie are just days when we feel how we normally feel, but louder. For example, I respond to most delays and setbacks with a sense of mild irritation, but when it’s ladytime, that mild irritation mushrooms into full-on infuriation. To avoid punching strangers, eschew caffeine and alcohol, drink lots of water, take deep breaths, eat protein-rich foods, and try to get a little bit of sun if you can. Vitamin D will help lift your mood.

Before you enter the forced socialization event, set expectations for yourself. How long do you have to be there? Plan on staying exactly that long, and then leaving. Set up a reward for yourself after the event is over. Focus on the epic nap you’re going to take once you get home, or how much fun it will be to take your pants off when you get through the door. Think pleasant thoughts about your waiting Netflix queue and bookshelf. It won’t be so bad! Predetermine exactly how many bathroom breaks will be acceptable. Two? Three? The powder room is your friend.

While you’re at the dreaded event and you’ve done everything you can to prepare yourself to be in a place where you don’t want to be, retreat into the glorious oasis of your imagination and try to pretend you’re somewhere else. Play a mental game with yourself: pick an annoying word or phrase that you’re sure will be repeated and go on a mental scavenger hunt for that word. At a work function? Pick your least favorite shop talk phrase (in my industry, those phrases are “banking solutions” or “grow your wealth” or “market forecast”) and try to get into as many conversations as possible wherein people use that phrase. Try to set a record in the Guinness Book in your noggin! People will think you’re such a take charge go getter, what with all your fancy profesh talk.

Another great crowd game for parties where you don’t want to be: pretend that, for some reason, the world outside of the room where you are has ended and the only hope left for the human race lies with the people in the room. You must reproduce with one or more of the members present; the future of humanity is at stake. If you’re at a party with your boyfriend or girlfriend, this game requires you to pretend that they’re not there. Or you can Polyvore the room, which is when you pretend that all of the clothes that people are wearing are in your closet, and you have to make new outfits from them. Imagine that everyone is a cartoon animal and talks in a helium voice. Try to make as many jokes as you can. The sky’s the limit when it comes to what’s going on in your head; the trick is to avoid externalizing your weirdo mental games.

When all else fails (to borrow a phrase from every dead-behind-the-eyes person in sales I’ve ever known), “fake it until you make it.” Force yourself to smile, and eventually your brain will believe that you’re sort of happy. Force yourself to be present in every conversation. Listen and ask questions to remove some of the conversational burden, and say things like “My stars!” Nod. Imagine that you’re Trudy Campbell from Mad Men. She’s usually pretty good at inane parties.

When you’ve done your duty and it’s time to go, avoid the faux pas of the Irish Goodbye. As tempting as it may be to ghost out of the party or social event without explanation, this generally looks bad. Take five minutes to say goodbye to the person who invited you and any other key people. Or you can do the thing that I do, which is say, “OKAY I’M GOING TO TAKE OFF,” and pageant wave at the door. If everyone’s super drunk and looking occupied, just leave. No one will remember or care.

Now go home and take your pants off, cranky all-star. You’ve earned it.