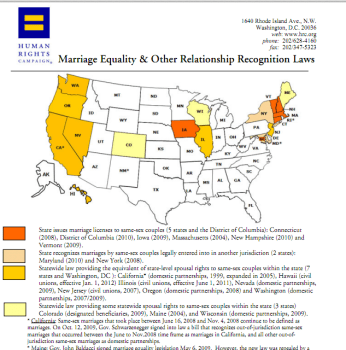 Today’s NYT special section may sound distressingly familiar: a lesbian couple who worry about parenting their two children because their home state doesn’t allow second-parent adoption. Since Amanda Shelton is their biological mother but Kay Shelton is not, in the event of something like a divorce or Amanda’s death or incapacitation, Kay would have no legal basis for continuing to care for their children. The long-term solution to this is state and someday federal recognition of same-sex marriage and families, as well as the dissipation of archaic attitudes about the moral fiber of gay people, allowing them the same adoption rights as straight people. No one, including the Sheltons, see that happening in the foreseeable future. So instead, the New York Times has assembled a team of legal and financial experts to explain what options they do have, and they’re relevant to thousands of couples like them all over America – most of whom don’t have the resources to consult a team of legal or financial experts on their own. So what do they suggest?

+ Power of Attorney: A power of attorney for parental authority doesn’t expire once it’s established, and would allow Kay the legal right to do things like take her kids to the doctor, or meet with their teacher as their mom. Mary Kator of the Rainbow Law Center says this should work for most day-to-day things, and that it hasn’t been challenged before. That may not be quite as reassuring as it sounds – power of attorney documents haven’t always worked, as in the tragic case of Janice Langbehn, who wasn’t allowed to see her dying partner in a Florida hospital even after her lawyer faxed a copy of their power of attorney document to hospital administrators. But it’s a lot more protection than you would get without one, and worth the effort to have one created. A medical power of attorney provides visitation rights in the hospital, as well as the ability for healthcare providers to share medical information with a non-biological parent.

+ Will: Each parent needs to designate the other as legal guardian of their children in their wills in case of death, and also make sure that each is designated as a co-parent.

+ Domestic Partner Agreement: In states where domestic partnership is legal, Kator recommends getting one, and then outlining an agreement with a lawyer about how parenting and child support will be handled if the couple breaks up. It’s unclear what one is supposed to do in states where that’s not a possibility, or is complicated by other factors – for instance, what if you’re married in a state where you’re legally allowed to, but then move to a state that doesn’t recognize your relationship? It seems probably illegal to have a domestic partnership as well as a marriage. Unless, since the state you’re in doesn’t recognize one, they aren’t redundant. It seems safe to say this is a murky legal area for the layperson to navigate.

+ Moving: The Sheltons considered driving 600 miles to try to have their youngest child in New Jersey, which does allow second-parent adoption. If parents are serious about the need for legal security for their family, they may want to consider moving to a more hospitable state – although obviously this can cause job and financial issues. It can take as long as a year to establish residency, so even this doesn’t guarantee a life without worry, but it may be the most secure option in the long run.

As far as finances go, things don’t look great either. A lot of what gay couples need to be doing is trying their best to replicate on their own the systems that the government puts in place for straight married couples, and it’s doubly hard when you factor in the fact that gay people (especially those of color) tend to make less money and be more susceptible to unemployment. (Kay Shelton is currently unemployed.) Here are the actions you can take:

+ Saving: Since gay marriage isn’t recognized by most states and as of right, by the federal government, your partner cannot benefit from social security based on your income. If you want them to have retirement money to draw from, you need to set up a savings account and deposit a portion of your paycheck into it yourself. As it stands, your spouse cannot benefit from what the government deducts from your paycheck for Social Security or from your 401(k), and there’s basically no way to equitably divide up that money if you break up. However, there’s also a sneaky back door to this problem that the Sheltons, at least, might be able to take advantage of:

+“Hiring” your spouse: “…Amanda files her federal tax return as “head of household,” and claims the children and Kay as dependents. Amanda could hire Kay as a nanny and pay her $3,649 a year, which she could then put into a Roth I.R.A. (Kay needs to earn less than $3,650 for Amanda to continue to claim her as a dependent, Ms. Salandra said.) Kay and Amanda would both owe Social Security and Medicare taxes, and Amanda would need to pay state unemployment taxes. That’s roughly $644 in total, but Amanda could deduct her share of the payroll taxes as itemized deductions on her return.”

+Revocable Living Trust: The Sheltons have documented joint ownership of things like their house and savings account, so in the case of divorce or death those things would pass to the surviving partner without a legal issue. But for couples for whom that isn’t the case, there’s the option of a revocable living trust, which is “often recommended for couples with substantial assets that may be subject to probate, the process to settle a deceased person’s estate. Assets held in the trust bypass that process.”

In short, the level of time, effort, emotional energy, and money that we have to put into just trying to protect our family from those forces that want to see it dissolved is astounding and infuriating, but unfortunately necessary. The more freely available information there is on this topic, though, the more likely families and individuals will be able to keep themselves and their families safe and in one piece from chance and from institutional indifference.

Feature image on homepage via Fabrizio Costantini for The New York Times.