“This was a really anti-establishment movement when it happened. It was separatist. As women, and as gay women, it was a move to create a space that valued women, and that valued being a lesbian, that mainstream society didn’t.”

MichFest is VERY gay-friendly. I know I was hyper-aware of this ’cause of my cousin — actually, everyone assumed she was a lesbian. I admit this über-gayness is one of my few criticisms of the festival. My cousin didn’t have a problem with it, but I felt that if the purpose of the festival is to provide a community representing all womyn and if the festival is billed as an inclusive environment, that needs to include straight womyn’s voices too.

Here’s the thing: straight women have an important direct link to influencing the patriarchy in a way that most queer women just don’t.

I met a handful of straight womyn but many of the workshops, all of the comedy acts and most of the musicians were lesbians. ‘Cause here’s the thing: straight women have an important direct link to influencing the patriarchy in a way that most queer women just don’t, and if straights don’t see themselves reflected to some degree here, they won’t feel welcome, and they won’t come, and we’ll miss out on their important perspective.

But I can’t lie, I did love the lesbian environment too. It’s like all the best parts of Pride but without the frustrating commercialism or naked men … and plenty of partying & music & fun! Anyone looking for alternative lesbian culture would find it here and you’ll also see every type of womon imaginable.

(That’s the first time I’ve spelled out womon, I’m making a concerted effort to integrate “womyn” into my vocabulary, but “womon” is still a struggle.)

As further proof if you don’t believe me that MichFest is truly inter-generational (I am openly trying to recruit you to the festival next year, and figure that many of you have the same prejudice as I had before going) consider that I saw nine of the 100 Hot Butches of 2009 there! It would have been ten, but Daniela Sea had to cancel for some reason. [ed.note: DS is a chronic canceler] 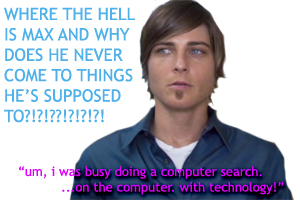 “If someone tries to tell me [Michigan] is transphobic, I tell them to stuff it. There’s so many trannies there. And it’s not trans people being marginalized. It’s people who were born as men. The festival is for people who suffered a girlhood. That’s all it is.”

Don’t Believe Everything You Read on Google

Soooo, if hypothetically you were gonna google MichFest, you’d find a ton of info about the trans policy debacle from a few years ago. I found this interview with Bitch of “Bitch and Animal” to be similar to my own take on the issue. I mention this debate even though I have reason to believe that the issue has died down despite the Google results; I only noticed a single mention of the topic the entire week and I met many people who I assume might have been FTM (or passing as male in the outside world) and whom were accepted unconditionally at the festival.

“This was a really anti-establishment movement when it happened. It was separatist. As women, and as gay women, it was a move to create a space that valued women, and that valued being a lesbian, that mainstream society didn’t.”

Coming home was hard. I felt so relaxed by the end of the week but I also felt a deeper affirmation of my feminist bent that left me ready to tackle the mainstream patriarchy with renewed strength. Also, it took a day to readjust my mindset to recognize that the men I saw around me were actually men and not mannish women. 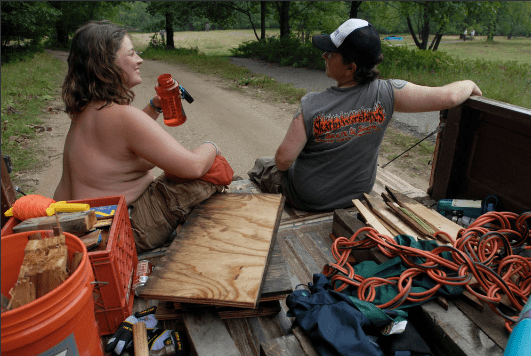 The festival blew away my preconceptions of what might happen there, and my mind was opened to new ideas and to a deeper affirmation of my own feminist bent.

Yesterday my cousin asked me, “Is your life changed?” I said it was, and she said her’s was too. And we both hope that an annual injection of festival will chip away at our preoccupation with how others judge us or how the patriarchy imposes limits upon us. So maybe by the time we’re 60 or so we’ll have amassed a strong enough sense of well-being to be as comfortably outrageous as the incredible older womyn we met in Michigan. 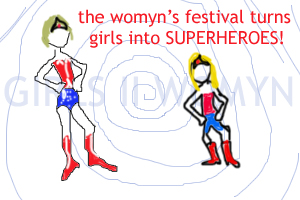 The first words I heard upon arriving at the gates of the Festival were “Welcome Home” by a gal in a fantastic super-womon outfit, and now I extend the same greeting to you: WELCOME HOME!

has written 12 articles for us.