High school is a period in our lives that’s rich with terrible/AWESOME experiences, and this goes double for queer teens. We’ve got both the terrible – bullying, homophobic prom committees, group showers in gym – and AWESOME – making out in cars, summer vacation, group showers in gym – in spades. Health class and sex ed maybe fall into the “terrible” category. I was lucky enough to have gone to a high school that offered a borderline decent background on things like STIs, anatomy, how to use condoms, and ways to say “no.” However, from 1996-2008, federal funding for abstinence-only sex ed climbed dramatically to a total of more than $1.5 billion dollars.

Let’s take a look at the aftermath of this AWESOME use of money.

High school kids got a bum deal. Often, sex ed is the last priority for schools, especially when they have to worry about raising low test scores to ensure they’ll remain open. During the Bush era (which was kinda like 8 years of a cultural oil spill), many schools opted to receive funding for sex education that would later prove inaccurate and ineffective over having none at all (hello No Child Left Behind!). Sex “education” that included some huge lies about things like the effectiveness of condoms, effects of having an abortion, and how AIDS is transmitted (one curriculum even said skin-to-skin contact). But what about the little baby queers? What have they picked up from abstinence-only sex ed?

♦ They don’t exist! Queers aren’t real. And when they are, they’re demonized as unnatural STI-ridden freaks of nature.

♦ Queer sex – especially safe queer sex – isn’t discussed at all. Everything is PIV sex focused (that’s penis-in-vagina sex, which is my favorite thing to make up songs about and sing for friends. Nothing annoys lesbians more than singing about PIV sex.)

♦ There’s definitely no mention of gender identity. Sorry, transfolk. You don’t exist either.

♦ Stereotypes around sex and gender are pushed hard: boys only want sex, and it’s the girl’s job to keep them from her precious, precious gem.

♦ Lastly, gay people can’t even get married in most states, so abstinence-only-until-marriage means that gays should live a life without hot, awesome sex. This is lame.

(Sources for all this are here and here.) 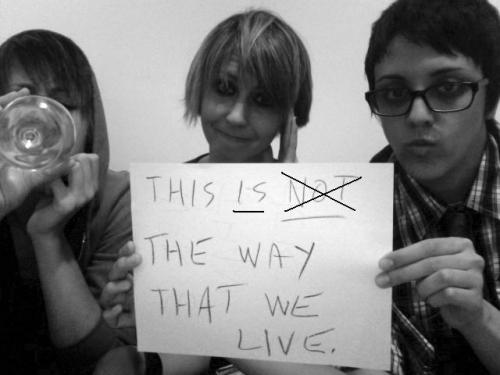 What’s even more terrifying is that these kids are having sex with little-to-no knowledge of how to protect themselves; for one thing, they’re not using condoms because they’ve been told they don’t work and not to bother with them.

But things are getting better. Over time, a bunch of states decided to stop accepting abstinence-only money, and then Obama cut all that funding and promised to fund “medically accurate” and “proven effective” (aka comprehensive) sex ed! Awesome!

It’s not over, though. During the health care reform ruckus, abstinence-only sex education found its way back in. The administration continued to fund a few abstinence-only and “faithfulness-only” programs, some internationally. However, this isn’t the same thing as before. The strict guidelines that previously applied are now much more flexible and the information provided must now be “medically accurate.” IMAGINE THAT. MEDICALLY ACCURATE. The gays have given this the thumbs up, for now. After all, abstinence isn’t a bad thing; it is the only surefire way to both not get pregnant and avoid the risk of an STI (contrary to popular belief, lesbians are not “the chosen ones” who escape all risk from STIs). Abstinence can be an important part of providing an overall education about sexual health, but it shouldn’t be the only part – even Bristol Palin at one time acknowledged that abstinence isn’t always realistic. Teens – queer or straight – need balanced information about their options, provided honestly and without judgment, in order to protect themselves.

Were you subjected to abstinence-only-until-marriage sex education? How did you make it out alive?

Missy has written 1 article for us.