If you don’t know how famous Koko, the western lowlands gorilla, is — for some perspective —she has a PR person. I know this because I once contacted Koko’s PR person for the use of some of Koko’s photos and was given a no. Also, in addition to being passed on by Koko the gorilla’s PR person, I don’t even know someone with a PR person, so that’s where I’m at in comparison to an animal only 13 years older than me.

Given Koko’s accomplishments, though, a PR person makes sense. She’s been on the cover of National Geographic twice. She’s had movies and books made about her. There’s a whole website dedicated to her daily goings-on. People pay top dollar for her paintings! Celebrities come to her.

At the heart of the buzz that surrounds Koko is her unusual capacity for language, something that amounts to a signed vocabulary of over a thousand words, and something credited to her handler and caregiver for over 40 years, animal psychologist Dr. Penny Patterson. It’s also something some people doubt the validity of, but I choose not to be one of those people because that’s my right as an American and even though I understand that a large part of primate communication is mimicking, I believe that the bond between Koko and Penny is one that cannot be explained by traditional science and if you want to fight me I’ll see you in the comments. 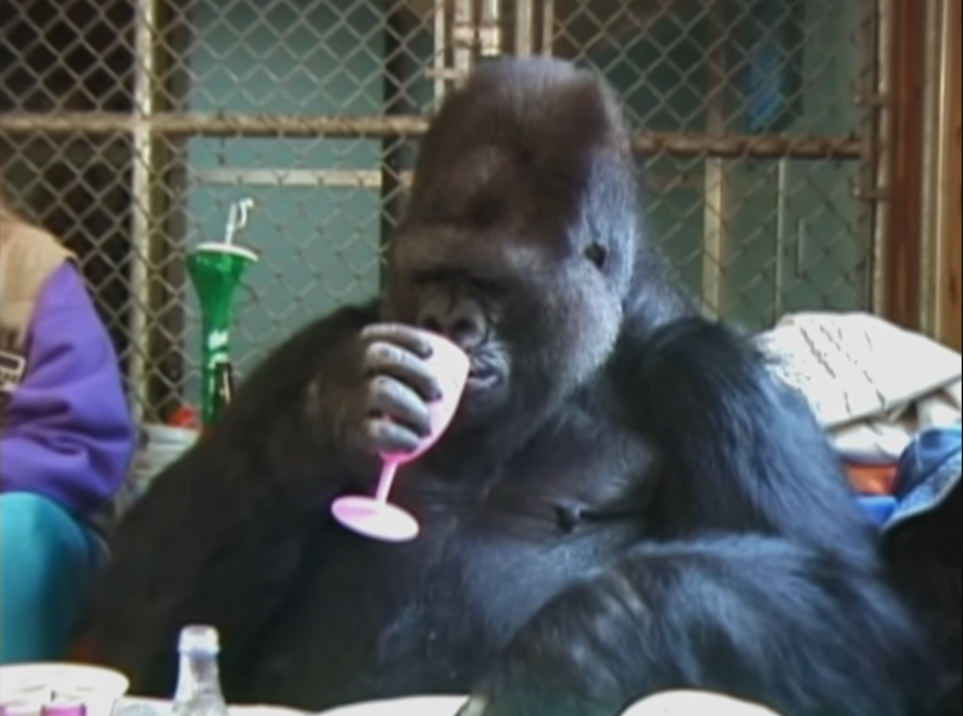 A screenshot from the PBS documentary about Koko

It’s also possible I’m so willing to accept that Koko can understand and communicate complex feelings and ideas because some of the things she comes up with to describe certain words have been known to derail my entire day and I want that kind of magic to be real. Her description for death in particular will never in the history of words be topped, and I feel it is my duty to share it and others with you, admittedly on a site that doesn’t make total sense for this kind of content, but I write here and love her, and who are you, the cops? Enjoy these masterpieces sourced from the Koko’s blog, Koko’s youtube channel, the PBS documentary now available on Netflix, Koko, The Gorilla Who Talks, and collections of interviews and studies.

On a person not understanding you

On things that displease you

On remembering something unpleasant

On that awkward moment when you want someone to leave

On a sad woman

On not wanting to see something