A couple of years ago I got myself into a little bit of a pickle with a greedy raccoon. I was looking for a getaway, he was looking for an easy mark — next thing I knew, I owned one single shirt, was sleeping in a tent down by the river, and spending every day and every night hiding out from a mustachioed frog named Cousteau who was always challenging me to push-up contests. I should have known when the plane landed on that island and immediately disappeared that I was in over my head, especially when the raccoon’s adorable little trash puppy nephews/assistants refused to accept any currency that wasn’t “Bells,” of which I had none, and was forced to earn by shaking trees for loose sticks and banging on rocks with a shovel in the hopes of knocking loose a few coins.

Then came the loans. You want to move out of that tent? I can loan you 100,000 bells. Yes, yes! You want a house that’s big enough to actually sleep in? I can loan you 200,000 bells. Oho! By the end of it, *I* was paying him for the privilege of remodeling my neighbors’ houses with my bare hands. Once I was finally debt free, I made two commitments to myself: 1) I will never enter into another business transaction with a four-legged mammal, no matter how cute and professional he looks in his tiny sweater vest. 2) I will not do deals in currencies I’ve never even heard of. (This guy invented even more kinds of monies while I was living on the island, like tickets you could earn for helping a drunk seagull that kept washing up on the beach.)

And, well, all of those promises I made were for naught. Last week, I found myself, once again, in debt to a creature of the night. This time, it was a tiny black cat. It seemed so innocent. The raggedy spectral void appeared on my Twitter timeline claiming to pilfer two Dabloons from me. I retweeted his little menacing message and offered him one hundred Dabloons and a Fanny Pack of Holding to keep them all in.

*gives him ONE HUNDRED dabloons in a little enchanted fanny pack so he can carry them all* https://t.co/KVcoBqmkGy 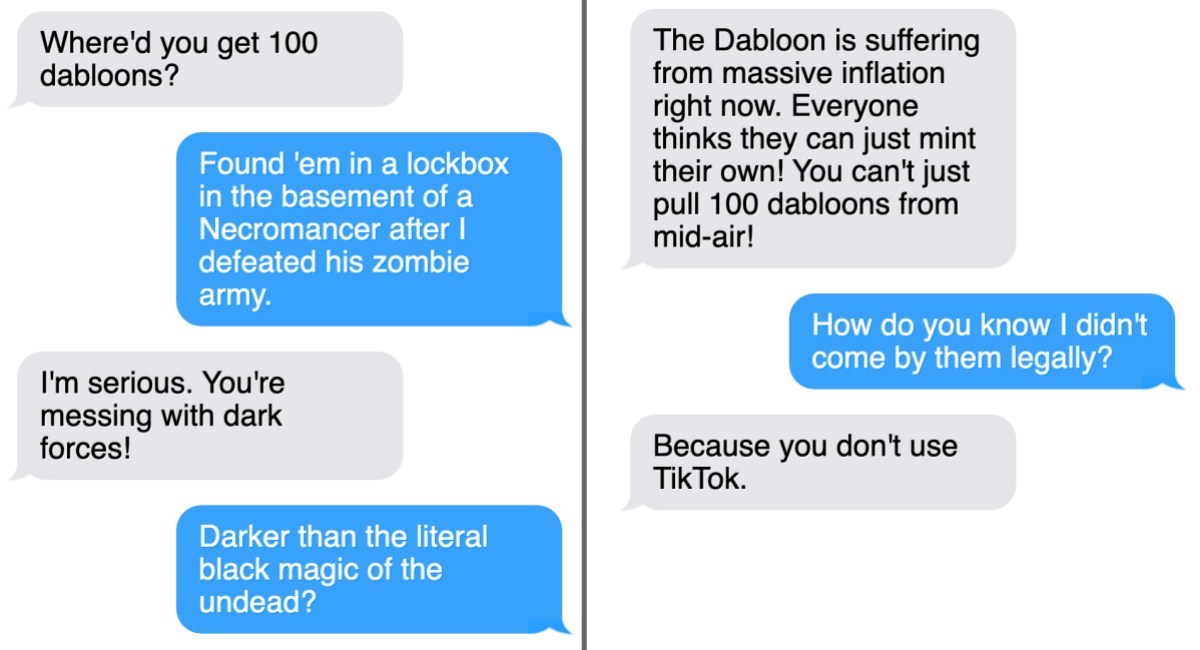 And that’s how I found out I was 102 Dabloons in debt! The two the void snatched from me, and the 100 extra I unwittingly gave him.

My friend was right: I do not use TikTok. One time it showed me a literal dying person! But off I went to try to figure out how to claw my way back out of another Tom Nook situation. Here’s what I learned:

Dabloons are based on Doubloons, the 16th century coin. They first appeared on TikTok in the form of four cat toes, a simple gift from a kindly fellow. 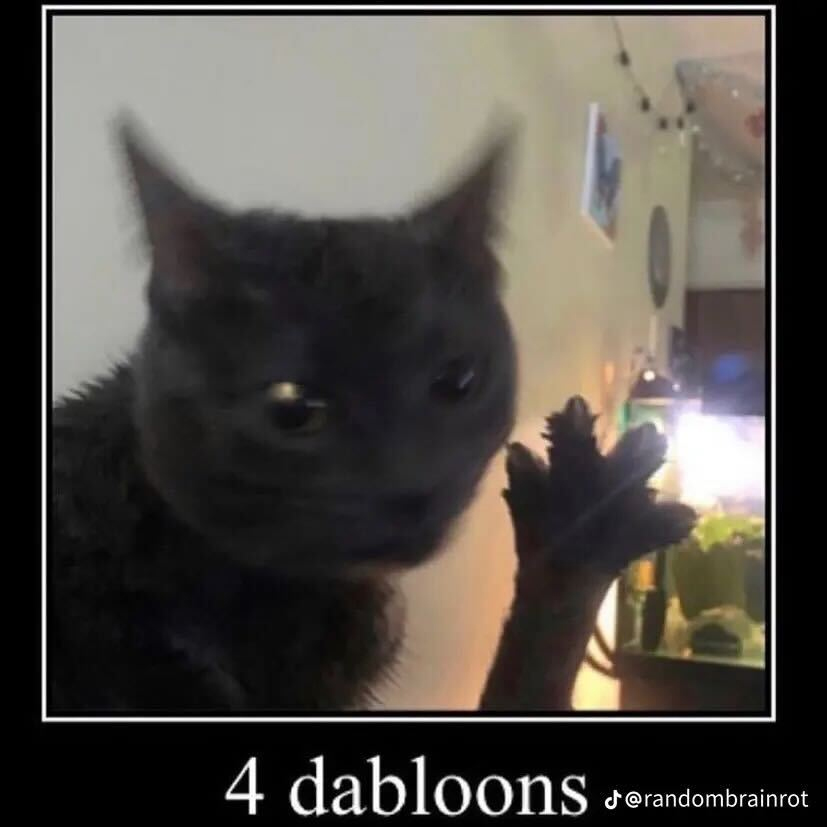 The currency exploded! Other cats began greeting travelers to their TikToks and offering more Dabloons. And then OTHER cats began offering travelers goods and services in exchange for Dabloons. Hair cuts, bead trims, castles, and swords. That’s when the thieves arrived! More cats, luring people in with a promise of “Hello, Traveler!” and then snatching Dabloons from them! TikTok users started tracking their Dabloons in the Notes apps of their phone or on scraps of paper or Post-Its. Some even used spreadsheets. Unfortunately, the unregulated currency underwent enormous inflation, just like my friend said, because basically anyone was allowed to make videos distributing Dabloons; anyone was allowed to sell imaginary horses, cloaks, and buttered bread for Dabloons; anyone was allowed to thieve Dabloons.

Soon, fiscal policies were enacted. For example, only 100 Dabloons can be distributed per video.  The Dabloon Government and Dabloons HQ monitor the Dabloon economy and create the policies. However, factions have formed! Revolutions against capitalism abound!

My journey to paying off my Dabloon debt was not smooth, especially because you’re not supposed to search for Dabloons. You’re meant to come across them organically. Every time a sweet little kitty would give me a handful of Dabloons, another sweet little kitty with a laser gun or an axe or even just a cutie-pie snarl would rob me of them! Plus the whole time, I was stressed to heck worrying TikTok was going to make me watch another person die. Up five Dabloons, down five Dabloons, up five Dabloons, down five Dabloons. I finally decided that the only way I was going to actually net positive Dabloons was by posting photos of my own cats’ toozles. I have four cats; that’s potentially 72 Dabloons.

However, have you ever touched a cat’s foot? Frankly you’re risking losing more than Dabloons if you do that. I was only ever able to generate three Dabloons on my own, during one of Socks’ evening baths. 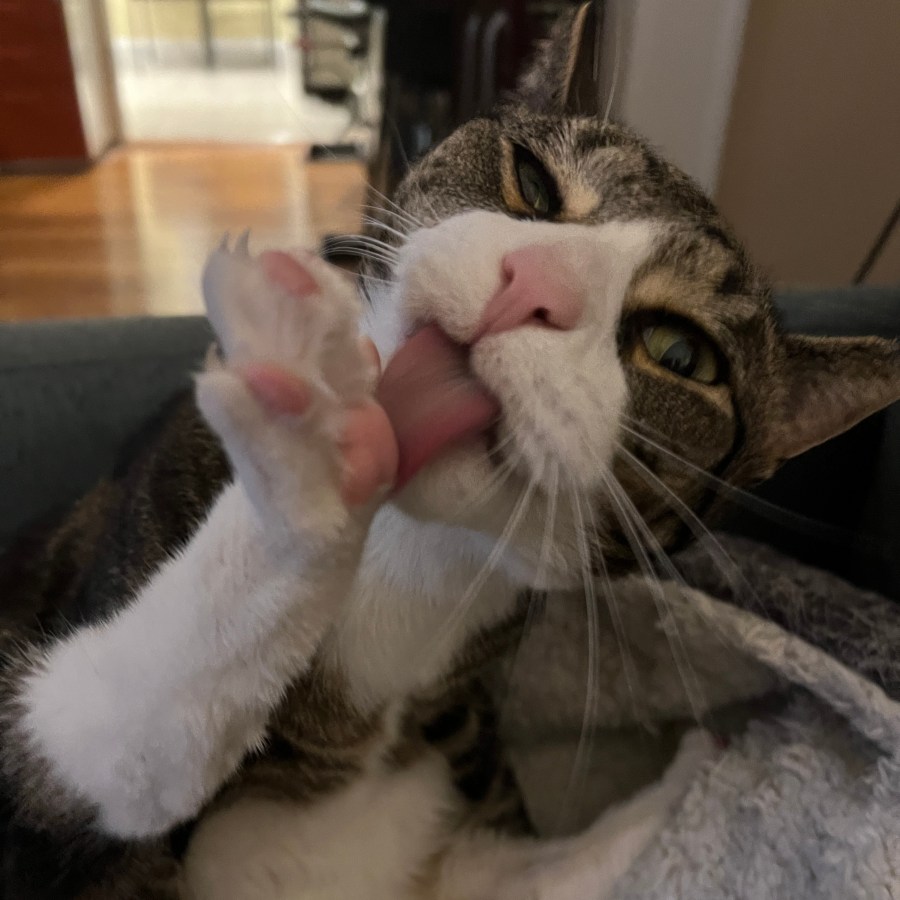 After an entire week of this chaos, I finally tweeted my woes, and lo! Valerie Anne, who had collected ONE THOUSAND AND FIVE Dabloons, gave me the 99 Dabloons I needed to break even.

Dabloons may seem silly, but they’re much better than crypto, which are imaginary currencies people make up in their brains and then borrow real money against and charge people real money for, real money that inevitably always disappears off the face of the earth! At least with Dabloons you get real things — like the joy of looking at kitten peets — out of it.