This week’s book is Dreams of an Insomniac: Jewish Feminist Essays, Speeches and Diatribes by Irena Klepfisz. I wouldn’t have discovered this collection if it hadn’t been lying in a free book bin. The gorgeous cover artwork caught my eye: red flowers blooming on a sunset-orange background. It was only by reading the blurb on the back that I learned Klepfisz is a lesbian whose essays address sexuality as one lens of intersectional critique. Her work is important as one of the first texts to explicitly address queer Jewish experience from a woman’s perspective. To this day, Wikipedia’s list of Jewish LGBT writers includes only six women among the 36 names. Irena Klepfisz is not on there, but her work adds a rare and thoughtful Jewish perspective to second-wave feminism, as well as a window into the concerns and activism of Jewish feminist communities between the 70s and the 90s. If you have a cherished copy of Sisterhood is Powerful on your shelf, or a fascination with the ways tragedies are remembered and forgotten, you’ll enjoy this book. 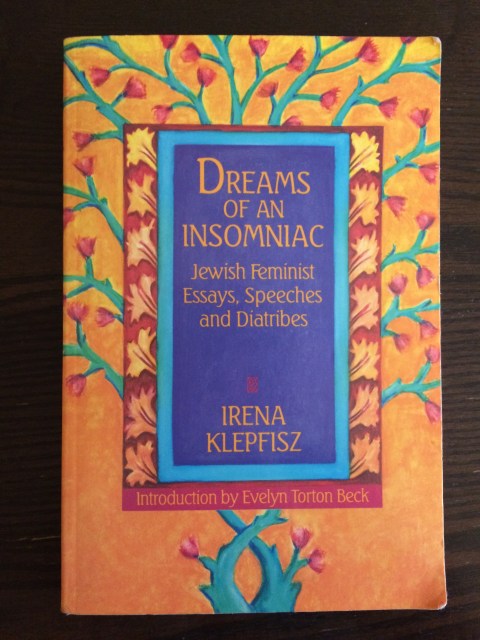 Dreams of an Insomniac was published in 1990, but Klepfisz’s essays were written over two decades, starting in the 1970s. The first two pieces address secular feminist concerns — the choice of being childless, and the oppressive interplay of class and economics in office work — while the other ten essays tackle questions of Jewish identity, memory, politics, and preservation. The collection is fascinating for its rootedness in a certain time, as well as for its moral courage. There is much in these pages to inspire.

The first essay, “Women without Children, Women without Families, Women Alone,” begins with the arresting image of a “shopping-bag lady…[with] discolored skin, the broken blood vessels on her legs, stained purple bruises, barely healed wounds.” Klepfisz writes of her terror of becoming like this woman, and her struggle with the cultural myth that bearing children would grant her “immunity” from poverty and isolation. With great honesty, she dissects her deep-rooted feelings of fear and guilt around her decision to remain childless, cutting through beliefs about motherhood as the sole source of love and security while acknowledging their power. “I have read a great deal about woman as mother,” she writes in her introduction to the essay, “but virtually nothing about woman as non-mother, as if her choice should be taken for granted and her life were not an issue.” A lot more has been written about this topic since, but Klepfisz’s essay stands out for offering a window on an earlier time, as well as for its willingness to examine the darker emotions that accompany “liberation from compulsion.”

Klepfisz likes to write in fragments, and her second essay “The Distances Between Us: Feminism, Consciousness and the Girls at the Office” makes masterful use of this technique, weaving stories of friendships from the author’s intermittent office jobs with economic analyses of the feminist movement and the losses that come with demeaning but necessary jobs: “8 hours a day, 5 days a week, we all lose possibilities, lose self.” She criticizes middle-class feminists for their arrogance toward working-class women — “We act as if we can afford to pick and choose. And we can’t.” She calls for feminist circles to become grounded in an acknowledgment of money and class — “it would be a good idea every once in a while to begin meetings with a ten-minute round robin so that each woman could say how she had spent the day.” This is a long and intricate essay that merits rereading for nuance. No matter what your circumstances, you’ll see aspects of your life reflected in it.

The rest of the collection will be of particular interest to those connected to the Jewish community. For those who are not, it offers thought-provoking perspectives on identity, memory, and how to work toward change. Especially interesting is Klepfisz’s take on lesbians and the Jewish community, which excluded them when she began writing the collection and later became more welcoming. She notes the many parallels between queer and Jewish experience, and concludes that the often-excluded queer community has a lot to offer the Jewish community in addressing its own challenges: “These are serious issues which require imagination and creativity. Lesbians and gays have these to offer and perhaps even more.”

A Holocaust survivor who escaped from Poland to America as a teenager, Klepfisz includes a powerful diary about revisiting Poland and witnessing the erosion of Jewish presence and memory there. This disappearance is made physical by “the unchecked sinking of gravestones into the ground,” the presence of crosses and absence of Jewish memorials at Treblinka, and the assimilation of family friends’ children into secular Polish culture. She critiques the transformation of the Holocaust into symbols and narratives, to the point that the public can get “turned off by the Holocaust.” Following this experience, her writing seems to become more committed to the preservation of secular Jewish culture. She writes of taking action against Israel’s military occupation of Palestine (not so different, she argues, from the violence Jews have experienced) while maintaining pride in her Jewish identity, preserving Yiddish language and literature, and seeking out female voices to add to the Jewish conversation. Her work speaks to the complexity and necessity of taking a stand. Let’s be real, these essays urge us. Let’s roll up our sleeves and do the work that needs to be done.

Join A+
Related:Hidden Gems of Queer Litnonfictionread a f-cking book