Tonight, folks from around the world will gather in front of their television sets to celebrate one of the greatest/worst shows in TV history, Full House. At long last, the timeless classic is receiving the Lifetime movie treatment, joining the ranks of such beloved cultural touchstones as Saved By The Bell, Aaliyah, Anna Nicole Smith and Whitney Houston. As we reflect fondly upon Danny Tanner, his three daughters, his dead wife’s brother and his weird friend who lived in the basement, we hope that the movie will answer questions that have stuck with us for all these years: Did Aunt Becky ever ask Jesse if they could just suck it up and get their own place? Was Alanis Morissette hanging on the set in 1995? Was there any problem under the sun that Danny Tanner couldn’t solve in 30 minutes with a kind, heartfelt lecture and a hug? Just how meta is it that they’re doing a Lifetime movie about this show, when Lori Loughlin seemed to be in just about every Lifetime movie shot in the late 90s? 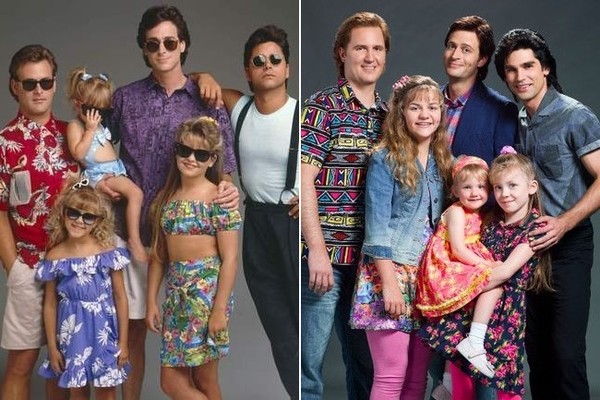 Gabby and I are currently posted in front of her TV, ready to revel in the delights of all the bad wigs, terrible dialog and questionable casting that come with unauthorized biopics. We’re gearing ourselves up to share our feelings in realtime, and we hope that you’ll share yours in the comments. We’re all on this journey together. When you’re lost out there and all alone, Gabby and I are waiting to carry you home… everywhere you look (Yikes).

7:12p: Just want to note that on my way over here I saw a billboard for John Stamos’ new show Grandfathered, in which Uncle Jesse plays a lifelong bachelor who suddenly finds out he has a son and a granddaughter. This guy just can’t get enough of wacky family comedies! Look at this man trying to be a parent!

Gabby says, “When are we gonna stop being like, OH MY GOD, look at this man trying to be a person with a child! How zaaaaany! …But I guess that’s kind of the whole premise of Full House, so. I really wanna see Five Dykes and a Baby, when it’s like, two poly couples and their friend who doesn’t really wanna get a job, and they get into all these situations!” Would watch.

7:57p: Gabby still knows all the words to the Ranger Joe theme song. “What do you think the casting call looked like for Uncle Joey?”

8:04p: Well, this is already just as bad as we suspected it might be. Grace Jones is playing in town tonight. We could have been doing just about anything else. Bob Saget and Dave Coulier are bros, and John Stamos’ dad looks younger than him. “They found Danny Zuko’s wig from Grease.”

8:10p: So far, person of colour count is at zero. Plot of the film seems to be the struggle of three white male actors who feel like the world owes them a big break. We’d rather watch Jodie Sweetin learn to add and subtract.

8:12p: Bob Saget just made a gross breastfeeding joke. This is why we can’t have nice things. Turns out the concept for Full House was a complete accident, which makes sense.

So far all we’ve established is that Danny, Joey and Jesse were all kind of awful people, and some random children have been cast.

8:27p: Dave Coulier and Bob Saget tried to convince John Stamos that the guys on the show are all gay. What if these men were raising children, cooking in a kitchen and gay?!?!??!

“That wasn’t even a fun gay joke. You can do better. Maybe this would be a good time to hire Brittani Nichols.”

8:29p: Bunny just pointed out that both of the staircases in the Full House house lead to the exact same spot in the upstairs hallway. I was hoping this show would address this, but instead THE HOUSE IS BACKWARDS.

“This is basically the story of how the guys from Full House wanted to be on Entourage, but instead they’re these weasels.”

8:35p: The clips of the crew filming Full House look like Room and Board from The Comeback.

Gabby is currently doubled over in laughter at the idea that she will never have to date a man like these guys. These actors are insufferable.

8:45p: If you have identical twins and you live in Southern California, you are sitting on a goldmine.

The music they’re playing when John Stamos sees Lori Loughlin is the same kind of music they play when Peter Pan teaches Wendy to fly.

8:47p: We would watch an adult movie with John Stamos and the guy playing John Stamos.

8:54p: Three adult men are insanely jealous of a pair of three-year-old girls, who have the audacity to be more successful than they are. I can’t stop looking at Stamos’ eyebrows.

9:01p: John Stamos is the only likable guy in this movie, and he and Dave Coulier are trying to out-heterosexual each other for some reason…? As soon as Dave announces his engagement, John immediately throws himself at a couple of women at the bar. You’re John Stamos. Have some self respect.

Laura is currently cackling over the trailer for Fatal Flip, a movie about flipping houses that results in a murder.

9:08p: Aunt Becky and Uncle Jesse are teaching DJ how kissing is supposed to work. For one horrifying second in time, I thought Aunt Becky was gonna teach DJ how to kiss in a much more direct manner. The girl who plays DJ is throwing off a serious Jan Brady vibe.

9:10p: Paula Abdul just stole the whole movie, dumped Stamos and disappeared. John Stamos has returned to his father’s diner to seek counsel. His father is literally giving him Danny Tanner advice while someone strums an acoustic guitar.

9:14p: Gabby and Laura just thanked each other for not being Bob Saget. If this movie was trying to make us hate Bob Saget, it’s doing an incredible job.

9:17p: So far this show has shown Dave Coulier being a complete jerk to everyone except the Olsen twins and John Stamos dispensing fatherly advice to Candace Cameron. Where is Jodie Sweetin? Does anybody care about Jodie Sweetin?

The three men are sitting on the couch with the Olsen twins, wishing real life could be more like Full House. I wish I was watching Full House.

9:23p: THEY REPLACED DJ WITH A COMPLETELY DIFFERENT HIGH SCHOOL DJ. They replaced all of the actresses. You can only identify them by their haircuts.

This cast alternate constantly between being complete douchebags and engaging in tender group hugs.

9:38p: Bob Saget is yelling at his wife that he doesn’t have time to hang out with his kids because he’s too busy being wildly successful, his words.

9:39p: Rebecca Romijn, about to be Stamosed.

9:46p: Every time the camera pans away from the Olsen twins, they age 4 years.

9:49p: I would have so much rather watched a show about the child actresses and how they came of age in the middle of this incredibly weird premise for a show, instead of these bloated ingrates. I’m never going to be able to appreciate this show again. My innocence is gone.

9:54p: Laura just told us that Netflix is rebooting the show, with DJ Tanner as a recently widowed and pregnant veterinarian. Kimmy Gibler and her daughter move in and wacky shenanigans ensue. It will literally be called Fuller House. I wonder if Joey is still living in his friend Danny’s basement.

9:58p: DAVE COULIER IS TALKING TO A PERSON OF COLOUR. This is the first time this has happened the entire movie.

Candace Cameron just got married! This movie doesn’t know with women who aren’t getting married, getting divorced, getting pregnant or dying of terminal illnesses. I’d really rather follow Jodie, Mary Kate and Ashley around for the next couple of years.

This movie just ended on a fart.

If you need us, we’ll be eagerly awaiting Fatal Flip.