In the grand scheme of things, a tiny airplane crashing in the city just outside of Grey-Sloan Memorial isn’t that big of a deal. I mean, yeah, it’s a plane crash, but did it crash in the middle of a forest, standing half the hospital staff? Was there a lion on board? A live bomb? A flood? A huge pole with two people kabobed on it? Nope. If it weren’t for the fact that this week’s tragedy triggers Arizona and Meredith into a full-blown PTSD state, it would hardly even be worth noticing.

I mean, okay. It is a plane crash, so there’s still some carnage, and Jo and Edwards are out of their minds excited for it. They weren’t around for Plane Crash v 1.0, so they’re mostly just so super stoked about the carnage and blood and severed limbs tossed here and there like so much confetti, but they’re the only ones.

Upon hearing about the crash, Meredith books it down to the pit and immediately flashes back to the forest; there’s Cristina with her dislocated shoulder, and there’s Arizona with her destroyed leg. Lexie trapped beneath the plane’s hull. And there’s Derek with his blood-soaked arm. Meredith turns and sprints out of there, demanding to know where Arizona is, and where Arizona is is curled up in a ball in the supply closet. Meredith sits down beside her and they try to convince one another they’re okay. It’s not doing either of them any good.

The framing of this episode is a different beast. Interspersed with scenes from the hospital we have scenes of Meredith and Derek, talking about their past and their future. It’s like, you know how when you start dating someone new, and everything is so fresh and so lovely, and the only thing you want to do is spend all day in bed with them? How you don’t want to go to sleep and miss a single second of their voice? It’s that, and it’s actually nice. Doesn’t bode well for Meredith, but what does, really? 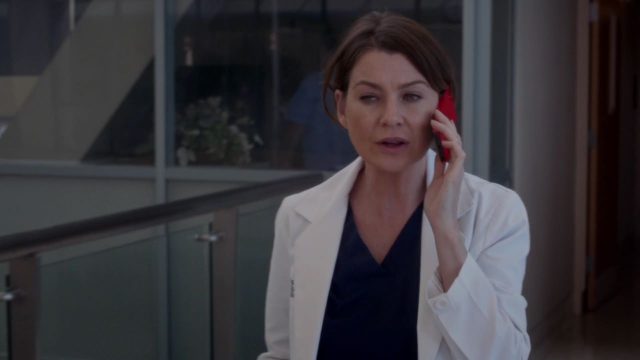 Back at Grey-Sloan, Alex corners Callie and tells her there ought to be a rule against people who were in plane crashes working on patients who were also in plane crashes. Callie agrees. That would be a hell of a chart on Grey’s, right? Like April doesn’t have enough to deak with without cross-referencing everyone’s schedules with their past traumas before she puts them on the schedule. Alex tells Callie they both need to keep an eye on Arizona and make sure she’s okay. Callie initially agrees, but then backpedals and tells Alex that she can’t be that person for Arizona, not anymore. Arizona needs someone she feels safe with, and Callie is not that person.

Alex goes looking for Arizona and finds her with a room full of preggos. I guess the plane crashed into a prenatal yoga class, so everything is going really well there.

Aside from the haul of pregnant ladies, there are two main patients of the week: Kate and Sam. Seems the plane crash was their very first date. Well, not the crash. Before the crash. The crash was sort of the end of their date. Kate is okay, but Sam? Not so much. He had a heart attack in the middle of the flight and sent the pair of them plummeting into that yoga class. Both Sam and Kate are waxing poetic to their doctors about love at first sight, etc. etc. etc. Sam flatlines and gets rushed into the OR, where Meredith and Bailey dive in, hands first.

Derek, by the way, is still missing. Meredith is completely distracted and trying not to freak out. Bailey tells her to slow her roll, but I’m here to tell you, if I had a loved one who worked at that hospital, I’d keep a bell around their neck at all times. You stop jingling, and I’m coming for you with an ambulance, a crowbar, and some shock paddles. Bailey, ever the voice of reason, asks how long Meredith can go without a full-on meltdown. She says six o’clock. Bailey tells her to keep it together until five. When five o’clock rolls around, she can freak out. 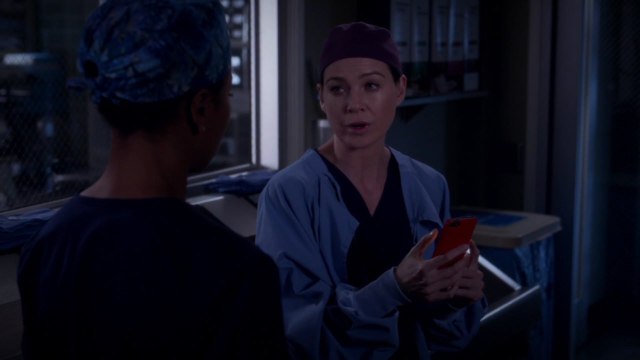 Do you know if there’s an emoji for toeing? 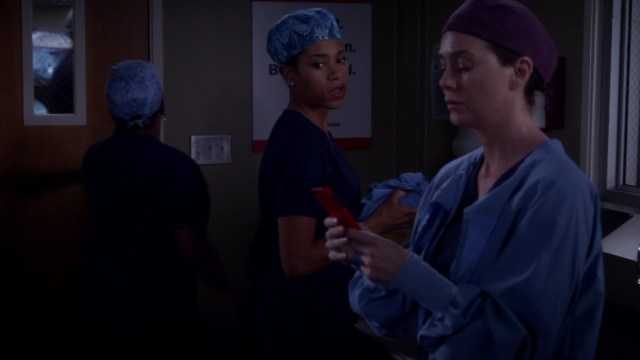 Can you please just text Cristina after this surgery?

Alex finds Maggie, April, and Jo in a room talking about the crash. April and Alex do a quick check in on Meredith and Arizona while Maggie and Jo look on, slightly confused. April, in a commanding use of the understatement, says “They had a bad experience on a plane a while back.”

Maggie feels that shit. Oh man, does she feel that shit. One time, she had to sit on a runway for FOUR HOURS and they weren’t serving drinks and it smelled like boiled feet and then! Just when she thought things couldn’t get any worse, they made them GET OFF THE PLANE. WITHOUT AN APOLOGY.

April looks at Alex and Alex looks at April, and the rock-paper-scissors for who has to tell Maggie about what it means when someone at Grey-Sloan says they had a “bad experience.” This crap should really be a part of intern orientation, truly.

I have come all the way around on Maggie. I love her. She is so adorable. Protect her at all costs. 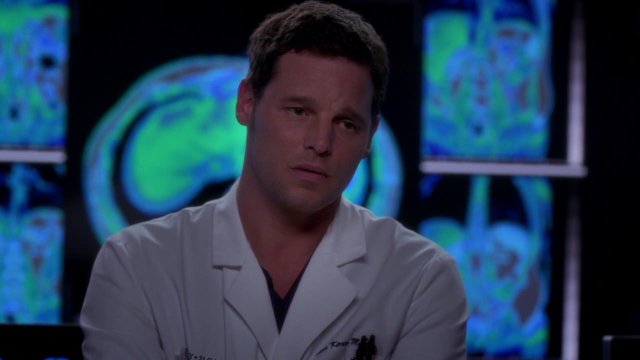 Honestly, I don’t get the deal with Tatiana Maslany. She’s just whatever as an actress. 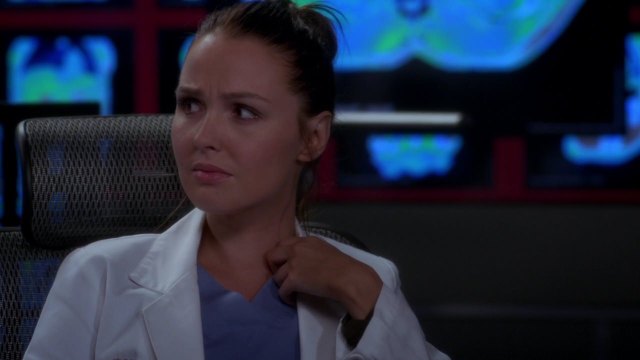 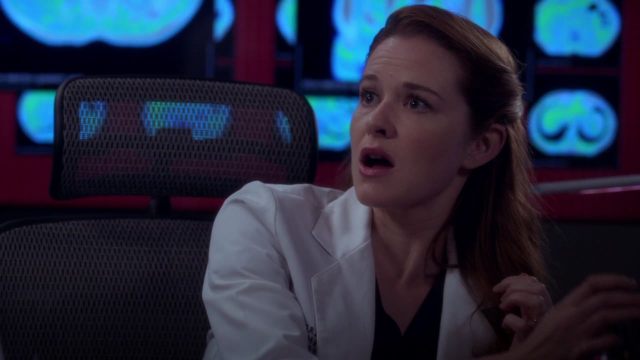 Sam eventually comes out of surgery, a little worse for the wear. By which I mean unconscious. Kate comes out all right, except for how she’s lost her short term memory. Edwards totally bought into their love at first sight tale, and she is not in for this shit. She hauls Kate up to Sam’s room and berates her until she remembers him. Which she does. Because this episode isn’t about that.

Ultimately, this episode is about family—the kind we find for ourselves. The kind of family we make. We see it in Arizona and Meredith, holding onto one another in this horrifying shared experience. It’s in Bailey helping Meredith find the strength to keep her head above water when all she wants is to run away screaming. And it’s in Arizona finding out—finally—that it wasn’t Callie who took her leg.

It was Alex. As soon as she finds out, she runs for Callie and demands to know why? Why did Callie let her believe that it was her? Callie makes the dearest, saddest face, and tells her that she always knew that Arizona was going to hate her for it, whether she was holding the scalpel or not, and she didn’t want her to hate Alex too. She wanted her to have someone. More than that, I think she needed her to have someone. It’s a certain kind of love when you want someone to be okay, even if you know that you’re not a part of that okay, and especially when you sacrifice your own happiness for their okay. And that’s what Callie has done. I think Arizona knows that.

This shit. This shit is why I can’t let these two go. 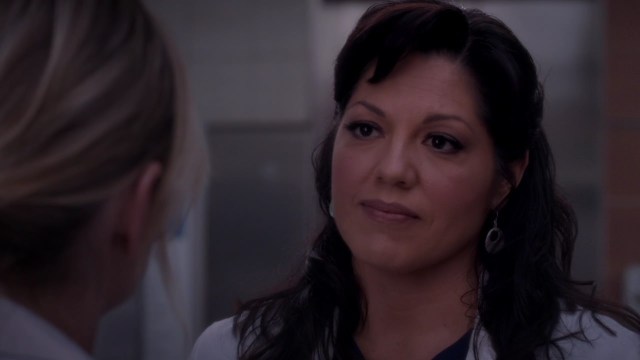 I guess you need to go save some more pregnant ladies. 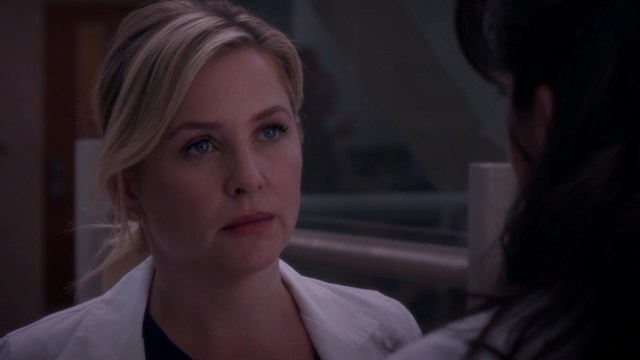 Gonna go listen to Taylor Swift alone in the dark, to be honest.

Okay, so I need to talk about Owen. Before any of this other hullabaloo, he and Amelia wound up in the Elevator of All Things together. He tries to talk to her and she shuts him down. And then he looks away and says “And…I’m done.” He goes on and on about how he’s not a game to play and so he’s done. After that, he treats Amelia absolutely horribly all day. He’s short with her, he snaps at her, he’s rude and dismissive, and then when she tries to call him on it, he whips out his story about the plane crash. How he feels responsible. How he put them on the plane. How it’s his fault. And like, goddamn, okay. I get that that can’t be easy for him, but he wasn’t there. He wasn’t in the woods. He didn’t drink plane fuel, and he didn’t watch wolves try to eat his sister’s dead body. He didn’t give the order to cut off his wife’s leg.

This is not about Owen. It never was. And and and! He was a jerk to her before any of the plane crash stuff even started! He wanted to end things on his terms. He wanted the last word. Never mind that she was trying to explain to him why she thought their relationship was a bad idea—and whether you agree with her reasoning or not, it was hers—he had to jump in and make it all about him. And then he used his guilt as a way to abdicate responsibility for it! Man, I know I talk a lot of shit about Owen, but this is exactly why. He’s just awful. I cannot stand him.

You’ll never guess who else wants to make this whole day about him. Quick, guess! That’s right, Richard Webber. He was sitting in his car when the plane flew overhead and as he tells the story again and again, it keeps getting worse and worse, like he’s playing that old Telephone game where you say something to the person next to you and they say it to the person next to them and so on and so forth, until the person at the end of the line is like “Haley’s banana has a sister who rides in the rodeo for unicorn?”

And the moral of the game is to not gossip? Well, Richard is playing that game, only all by himself. After she hears the story for the third time, April pulls Richard aside and calls him on it, and he talks some shit about his life flashing before his eyes, yada yada yada, and how the minute you see everything you have, you see everything you have to lose. I’m not sure why that has dictated him standing around talking shit to interns all day and not, oh, I don’t know, checking on the doctors who actually were in the plane crash, or calling Catherine, or something useful, but OKAY. Fine.

Heavens to Betsy, someone get me a cup of tea and a cookie.

Five o’clock rolls around, and Meredith goes to the phone. As she picks it up, she looks out the window to see red and blue lights flashing in her driveway.