Previously on Grey’s Anatomy, Arizona was good, Bailey was great, and Dr. Geena Davis was the most greaterest. Simultaneously, Callie had a perfect face.

You know that slow climb up the first, steepest hill of a roller coaster? How the bearings and wheels tick tick tick beneath you like a bomb? And how you spend the whole time (seconds? minutes?) getting yourself ready, because you’re going to tip over that precipice probably before you think you are and it’ll be awesome or horrifying or maybe a little bit of both, but either way what’s about to happen to you isn’t going to stop until the ride is done? 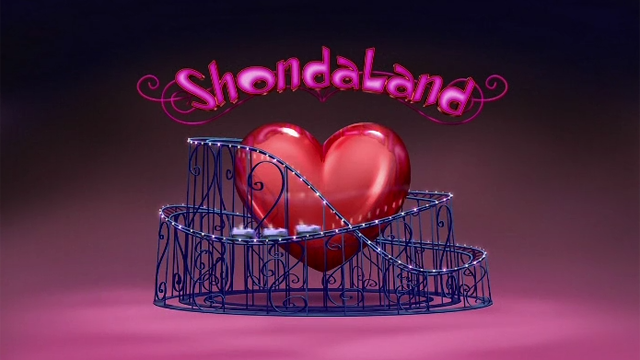 Keep your arms and legs inside the ride and get ready for the ugly cry of your life!

That’s what this episode is. It’s the long climb to the top of Kingda Ka, and you and I are the dummies in the front car. So let’s get started!

It’s a new day at Grey-Sloan Memorial, and Dr. Geena Davis a lot to do. She’s got a corkboard full of babies who need saving, and she’s the person for the job. Dr. Geena Davis and her perky sidekick, Arizona! Hi Arizona! Look at you smiling! What a thing! Arizona reminds Dr. GD that she’s got nine babies to save this very day, plus an MRI to check on the tumor in her brain that’s about to kill her stone dead. So their Friday is off to a good start.

(Since I’m so used to seeing Arizona as Batman, it’s strange to see her as Robin for once, but she and Dr. GD are super adorable together, so let’s roll with it. ) 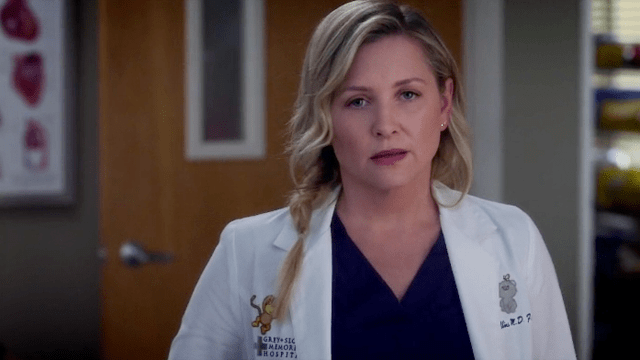 Do you really want to die without ever going spelunking in the cave of wonders even just one time? 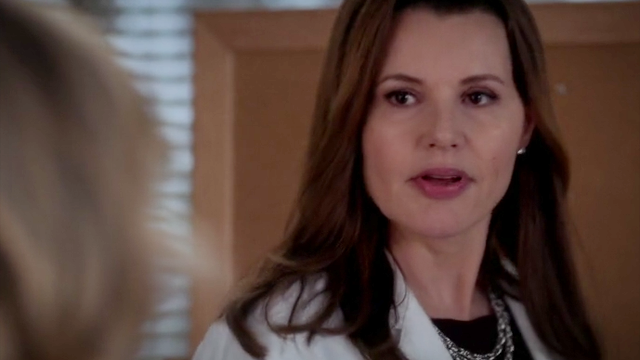 I don’t understand the question and I won’t respond to it.

Amelia is already in the MRI room, getting her game face on. Owen comes in to bring her coffee, and she appreciates the caffeine, as every correct person does. But she’s got important business to get on with. Things like “operating” and “saving people’s lives.” She can’t be bothered with Owen’s fragile male ego right now. She thanks him for the coffee and sends him on his way. Well done, Amelia. Petition for Owen to bring drinks to people and then be told he’s bothering them. One million signatures on my desk by Monday.

Owen’s other job is to exposition for us that Amelia is holding a lecture series about Dr. GD’s tumor. All the king’s horses and all the king’s men are asking to video conference in. No pressure, Owen. But there is a good piece of news, and enjoy the taste of it cause that’s the only scrap there is this week. Dr. GD’s tumor hasn’t grown. Yet. Amelia would like Dr. GD to have some localized radiation to make sure that continues to be the case. Dr. GD would like Amelia to get stuffed. 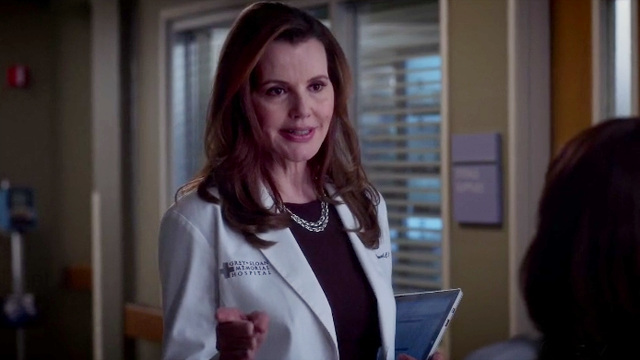 That dress is white and gold, end of discussion. 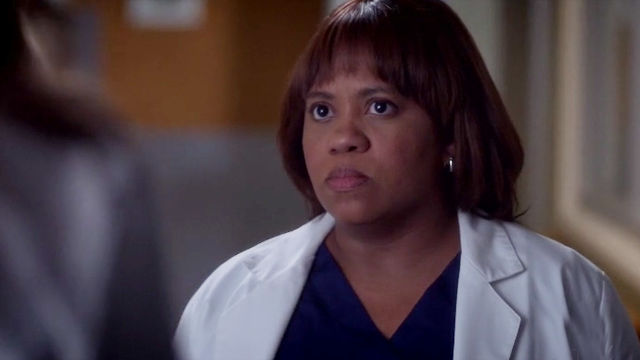 In the auditorium, a herd of interns and residents in powder blue scrubs listen in rapt silence as Amelia weaves a horrifying yarn about the nature of life, and also of tumors. She begins to describe her hypothetical surgery, step by step, but you’d think she was up there reciting E.E. Cummings’ “Since Feeling is First.” Jo is about to fall right out of her chair. She’s more turned on by Amelia talking about tumor babies than Alex could manage with a bottle of champagne, a jumbo pack of AA batteries, and a stack of femslash fan fiction.

I’ll tell you who needs some good femslash fan fiction, and that person is Callie. She’s hit that post-breakup place where you start forgetting all the bad stuff about your relationship, all the shit you broke up over in the first place, and only remember how your girlfriend used to always let you tuck your cold hands under her shirts, and how soft her skin was there, and now you’ve got cold hands all the time and your ex is sitting across the lunchroom laughing with someone else. “She seems happy. Like really happy,” are actual words that come out of Callie’s actual mouth. Alex tells her Arizona hasn’t been coming home at night, which can only mean that Arizona and Dr. GD are in the bone zone. Callie bites her straw and glares and feels like she’s being tested by the Lord. 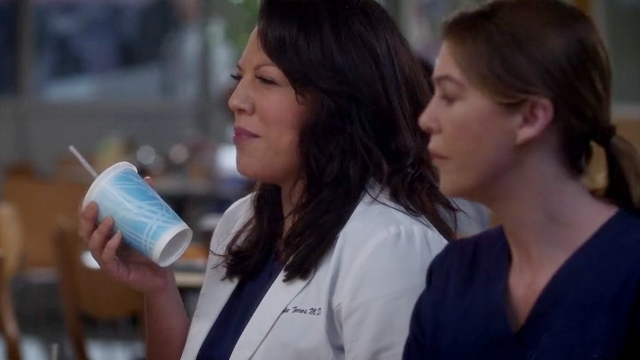 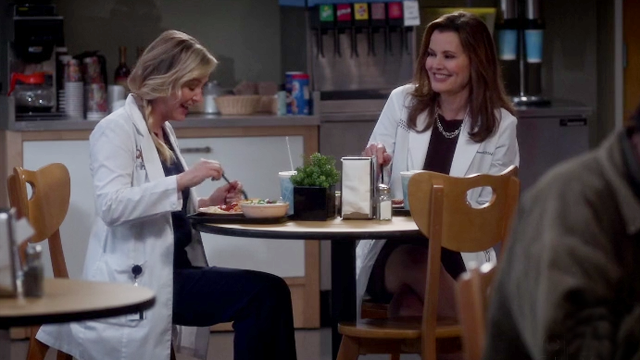 And then the black llama broke that wrangler’s ankles and juked him right out of his boots. It was a good day.

In the Hallway of Confrontation, Bailey corners Arizona and starts yanking at her heartstrings as only Bailey can do. There is a patient—the wife of a patient Bailey lost six months back—that she wants Dr. GD to take on. Dr. GD has already given her a firm no but Arizona is a puppy who just wants to help people. She sneaky sneaks the patient on Dr. GD’s schedule. It goes exactly as well as you’d imagine. Dr. Geena Davis has exactly zero time for any of Bailey’s shenanigans, being on this pretty tight schedule of Not Dying Yet. She’s a Gryffindor, but she’s not Hermione Granger, therefore she has access to precisely no Time-Turners. She points at the Board of Babies and tells Arizona to pick one for swapsies. The life of one baby for another. Arizona was probably the kid with a set schedule for rotating her stuffed animals into and out of her bed so no one would feel neglected or get their feelings hurt. GD knows damn well she can’t swap one literal baby for another. 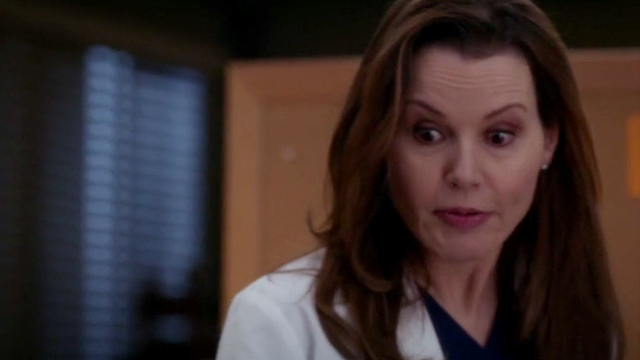 THERE’S NO CRYING IN PEDIATRICS 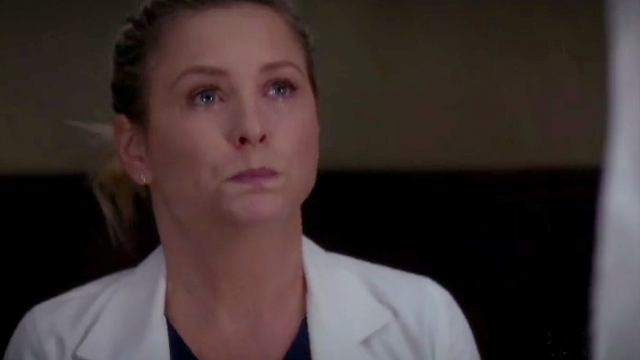 Right, okay, so Dr. GD is getting her face radiated, and I’m going to be honest with you, it looks like one of the worst things ever. She’s got this plastic mask thing on that molds to her face and snaps to the table. HAHA NOPE. Absolute sheets of nope raining from the sky. Gallons of nope. Swimming pools of it. Oceans. She muscles through a couple of sessions, but then flips out and starts demanding to be let loose. Not a single person watching blames her. Amelia does, but Amelia is otherworldly, and if she’s going to be hanging out on the mortal plane she might think about cutting those of us who live here a little bit of slack.

She is right, though. Stopping the radiation means Dr. GD’s tumor infiltrates the optic nerve, which has always been the drop dead date. 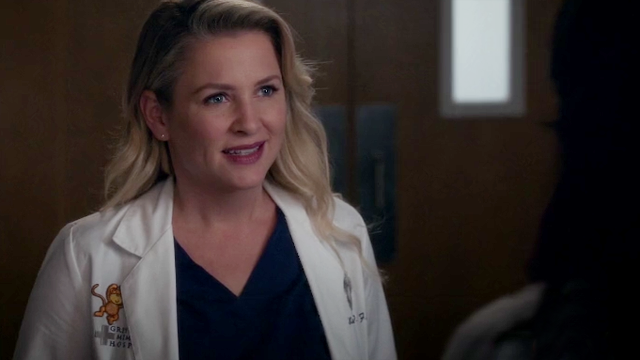 Relax, Callie. She doesn’t even know “taco” is a euphemism for “vagina.” 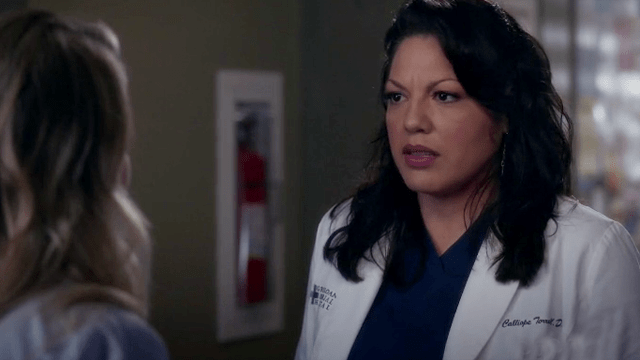 Oh, okay. Well. I look forward to continuing to try not to have sex with you.

We’re all afraid, ’cause Shondaland. 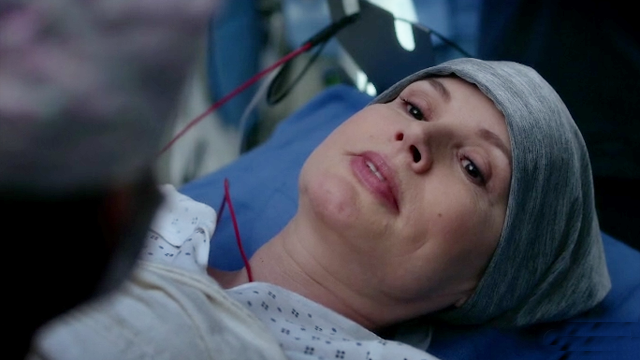 Lay off the high ones. 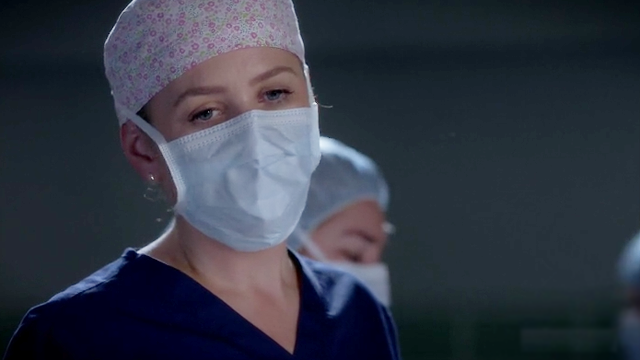 I’ll see you guys on the other side.