An entire day passes, I guess, because it’s nighttime again in Gotham. The child snatchers are talking to one of the business owners about their deal where he supplies them with ATP and hides the kids in exchange for giant, sweaty piles of cash. He tells them that with the cops on their tail, they oughta pay him more money. They refuse, and wouldn’t ya know it, suddenly the business owener’s henchman has been ATP’d by the woman child snatcher. She says something about “the Dollmaker,” but before we get an explanation, the cops arrive! 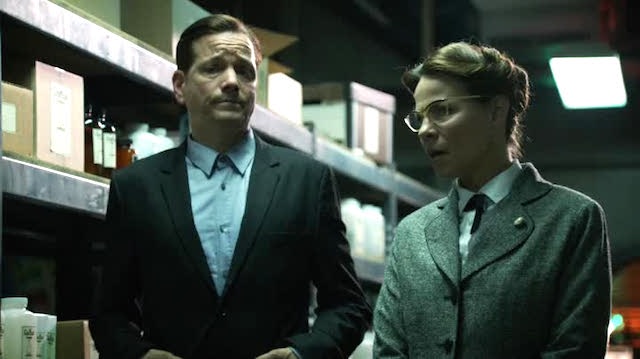 Outside, Harvey is telling Jim he needs to learn to control his woman because she’s a high class, temperamental broad, so Harvey and I are no longer friends, at this point. 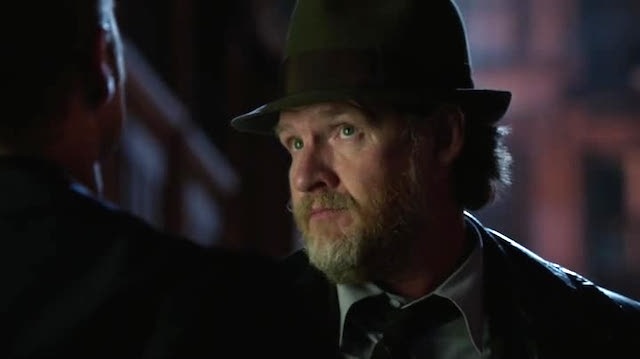 It’s worse knowing that he’s not a villain. He’s just like that.

Jim and that asshat go inside and are greeted by the lady child snatcher, who lets them in so they can talk to the business owner, who in turn is being secretly held at gunpoint by the dude child snatcher. An old-fashioned, Western-style gunfight breaks out after about five seconds, and the child snatchers escape. 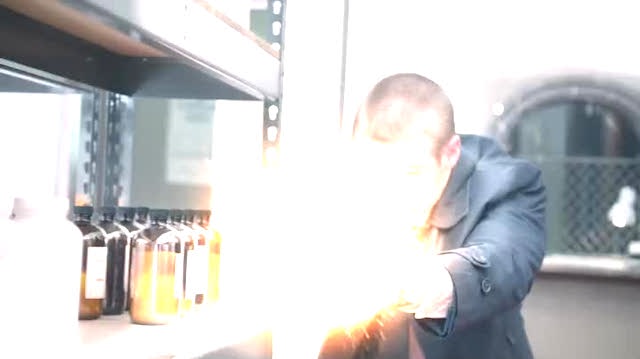 With the cops now assumed safely outside, the business owner instructs the janitor (?) to kill the kids, but DON’T WORRY, Jim is right there and takes the guy out right as he goes to shoot them. Who even knows where Harvey is, what’s important here is that Jim is the Ultimate Hero and that nobody’s moral compass is as true as his. Except for both of the queer women. But that is neither here nor there, apparently. 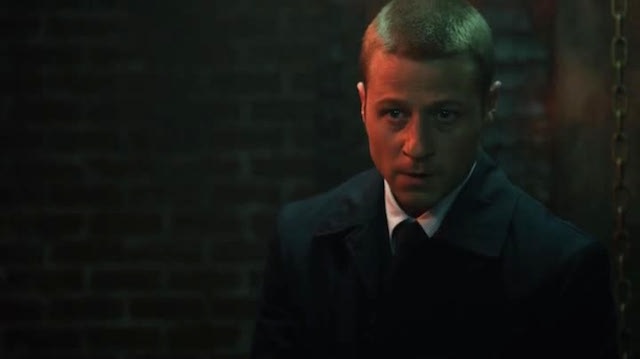 Oh it appears I have saved the day yet again

But before we can throw our hats in the air and freeze-frame like we’re gonna make it after all, the mayor is holding a press conference about how, because of this incident and because the child snatchers are still at large, they’re going to round up all the homeless kids and put them in child services. We see shots of kids in handcuffs, so we know this is for sure a terrible thing that’s happening. Cat is among those in cuffs, but hilariously, the best part of the scene is how terrified she is of the barking police dog BECAUSE SHE’S CATWOMAN. YOU GUYS. DO YOU GET IT. CAT IS CATWOMAN. 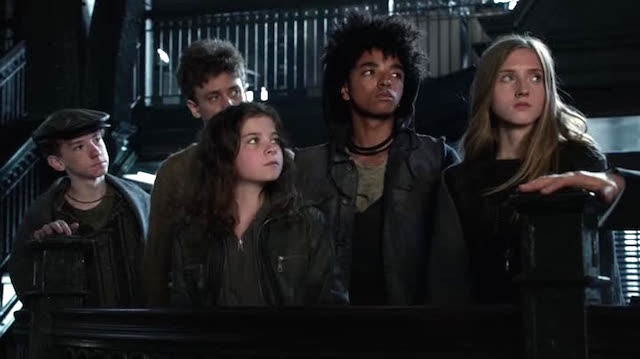 After the press conference, Jim tells the mayor and company that they’re all morally fucked, and everyone is like OH MY GOD SHUT UP, including me, even though he’s clearly right. 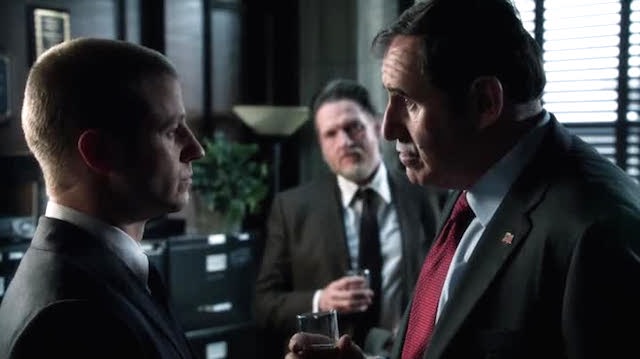 Listen, we’re already standing this close, we might as well make out.

Later or maybe immediately after, Alfred pops by and asks Jim to visit tomorrow “at tea time” to check on Tiny Batman. Jim agrees and then probably immediately pulls out his phone to see what time is “tea time.” 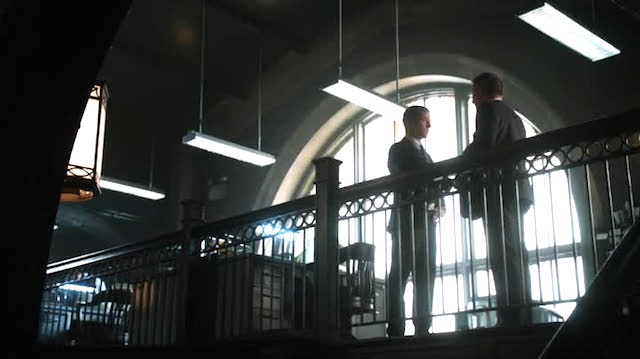 Then there’s a tiny scene of Tiny Batman drawing fucked up doodles and listening to metal so we know something is wrong because no one listens to metal on TV unless they’re going through something. 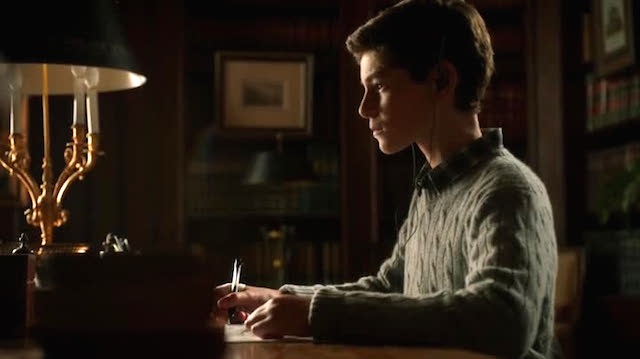 Oh wow, I knew the 50 Shades of Grey audiobook would be a lot, but I was not expecting that.

Elsewhere, Cat is being put on a bus to go upstate to juvie. They ask for her name, but since as soon as she says it we’ll know she’s CATWOMAN, she instead demands to make a phone call to Jim Gordon. 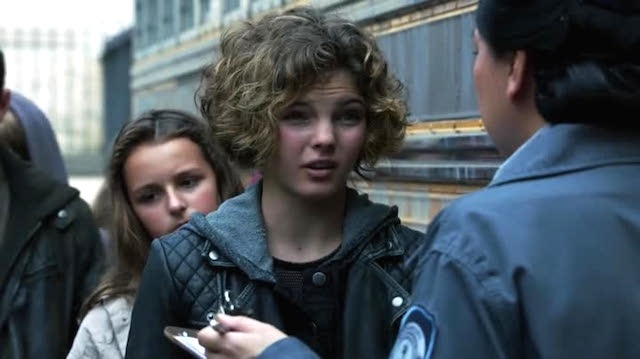 Honestly I don’t even care who A is anymore, I’m just worried about their college prospects, you know?

They deny her request and shuffle her onto the bus anyway, where she comforts a crying kid so we know she’s ultimately a good person, but then WHOOPS suddenly the child snatchers are dressed as guards and are taking over the bus. Cat tries to run away, but when the lady child snatcher threatens to shoot her, she begrudgingly sits back down. Ruh roh. 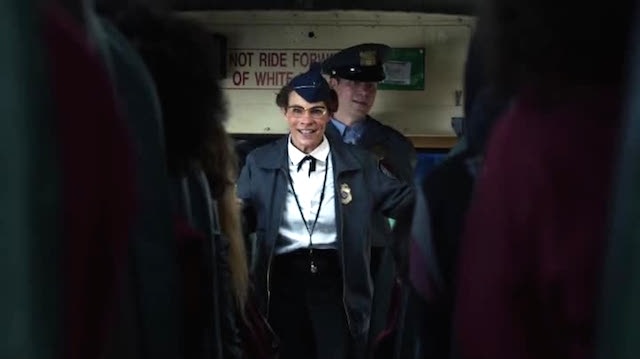 Later, the mayor bursts into the police chief’s office because he somehow blames her for losing a busload of kids? She tells him it was probably The Child Snatchers(tm), but don’t even worry about it, dude, they’re working on it.

“Working on it,” as it turns out, means Harvey is beating the business owner with a phonebook while Jim watches, which means Montoya has officially pulled ahead of him in the moral compass contest. Score. 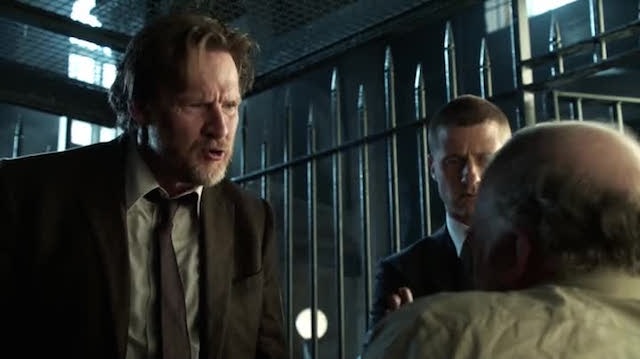 They learn the snatchers’ truck had a logo on it that the guy described as a blue plate with a fork. Good work, fellas, you definitely had to beat the shit out of someone for that dollop of information. After panicking for a while about a catering company serving children for dinner (obviously the truck couldn’t be a decoy, I guess?), Jim figures out that it’s actually the logo for Trident International Shipping. 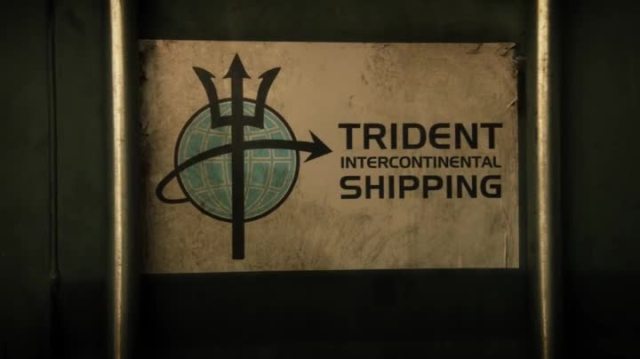 The human world, it’s a mess.

The busload of kids has finally stopped at some sort of warehouse situation where the child snatchers are unloading the kids into cargo boxes that perhaps unintentionally remind me of like, gas chambers. After counting and recounting all the kids, the child snatchers are still one short, so the lady goes to check on the bus because obviously Cat is still on it. She manages to sneak by undetected, despite some loud sounds working against her, and creeps away, CATLIKE. 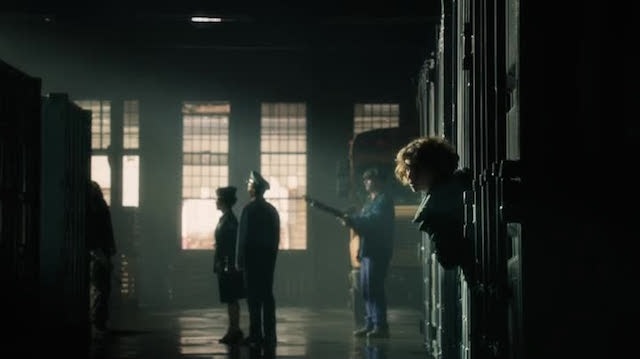 You know, Catwoman is bisexual in some of the comics. I’ve got my fingers crossed for Tiny Catwoman, I guess, because for pete’s sake, for a show with so many queer women characters, Tiny Catwoman is really the only one who’s done anything more interesting than making a phone call so far. I guess it’s still early in the game; I’m gonna try to keep the faith.

Anyway, one of the guards comes running in because Cat scratched his eyes out. While the others run after her, the lady child snatcher insists on inspecting his wounds and then shoots him when she sees how bad they are. They probably didn’t want to pay for his health insurance or something. 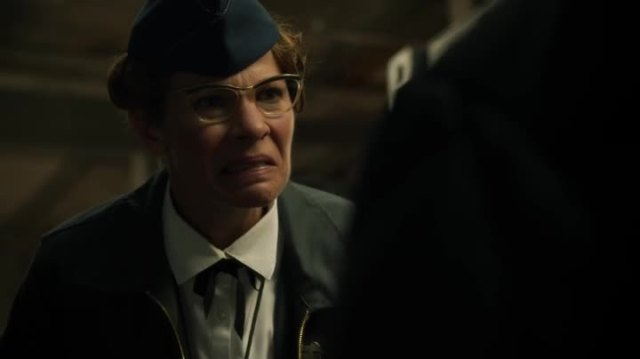 Nah, I don’t think you should pop that yourself. Go have a dermatologist take a look.

The lady child snatcher pursues Cat into what I can only assume is the warehouse at the end of Raiders of the Lost Ark. They play cat and mouse for a bit, but this time, Cat is the mouse, DO YOU GET IT? Eventually, Cat is cornered, but Jim shows up to save her! Is someone keeping track of how many capable women Jim saves on this show? I think we’re at two so far. 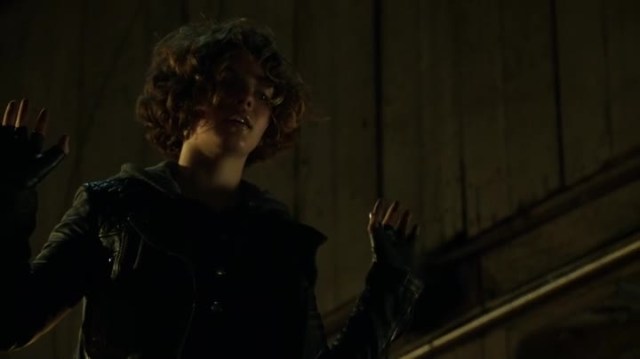 Shit, what would Natty Gann do?

It’s tea time at Wayne Manor, and despite being summoned in specifically to see Bruce, Tiny Bats is nowhere to be found. Instead, Alfred is discussing how concerned he is about Bruce’s mental health, especially since he’s started cutting himself as well. Tiny Batman pops up out of nowhere, and Alfred yells at him to stop sneaking up on people, which is actually amazing. Jim tells Bruce he should see professional help, but Bruce is like “no, I’m Batman, also can I throw money at those homeless kids you just saved?” so they talk about that instead. 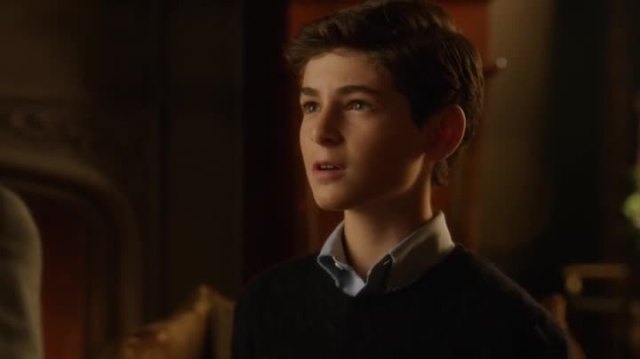 Smashcut to the kids in new clothes being filed through Gotham PD on their way to juvie. Cat is begging an officer to 1. not call her Selina (ha), 2. not send her to upstate, and 3. let her talk to Jim. The officer accepts #1 but denies #2 and #3, at which point SHE THREATENS TO TELL PEOPLE HE TOUCHED HER UNLESS HE COOPERATES. First of all, what the fuck. Second of all, what the actual fuck. I guess it was in-character, but god, at what cost. 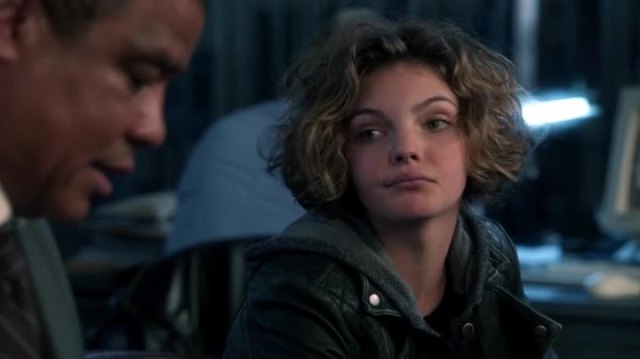 Although: finally, a morally interesting character.

He goes to find Jim.

Back in the Penguin’s trailer/lair, everyone’s favorite villain is staring at his serial killer-style map of Gotham when his phone rings. It turns out that he’s holding one of the bros for a ransom, and since the bro’s mom thinks it’s a joke, the bro is about to pay the bloody price. Somehow I am less alarmed by this scene than I was by Cat threatening to lie about being molested. 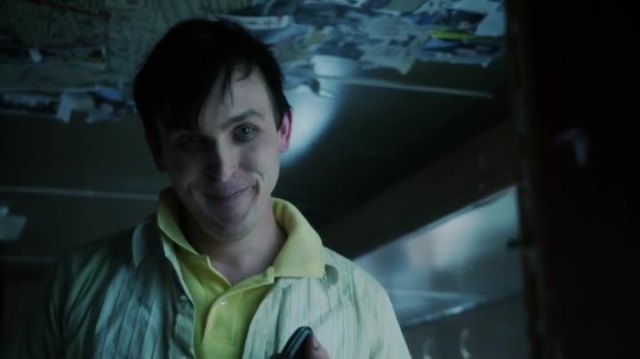 Back at the police department, Jim and Cat banter and barter. Cat says she knows who killed the Waynes and is willing to tell Jim for the price of not going to juvie. 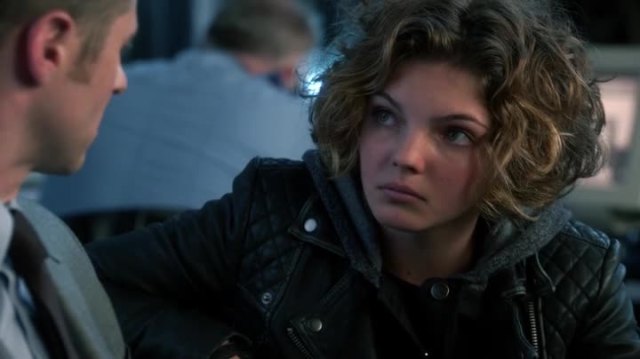 Who the hell is Anne Hathaway?

Will Jim agree to Cat’s deal? Will the Penguin kill that bro? Will we finally see more of Detective Montonya? Tune in next week, same Bat-time, same Bat-channel!

Before you go! It takes funding to keep this publication by and for queer women and trans people of all genders running every day. And A+ members keep the majority of our site free for everyone. Still, 99.9% of our readers are not members. A+ membership starts at just $4/month. If you're able to, will you join A+ and keep Autostraddle here and working for everyone?
Join A+
Related:gothamgotham recaprenee montoya