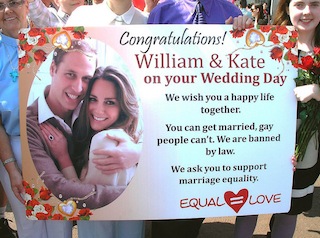 Hello, I have been doing my best to completely ignore any and all references to the International Committee Event to Solve Slow News Weeks, otherwise known as any and all coverage of the royal wedding thing that is happening — actually, I don’t know when it’s happening. But gay people are going to protest it so now we’re here! This says a lot about my attention span actually.

“Congratulations William and Kate on your Wedding Day. We wish you a happy life together. You can get married, gay people can’t. We are banned by law. We ask you to support marriage equality. Equal=Love.”

According to Tatchell, the goal of the event was to highlight the fact that Kate and William can get married but gay people can’t:

“Our event will urge the royal couple to support moves to end the ban on gay marriage. We want equal marriage rights for all couples, regardless of sexual orientation.

Kate and William had a choice. They could get married, or not. Same-sex couples don’t have this choice. We are banned from marriage by law. […]

The 25 April is not a celebration of the monarchy or marriage (many of us are critical of both). It is an affirmation of our opposition to discrimination in marriage law. We want to show our support for the right of everyone to be able to choose whether or not to get married.”

Also at the demonstration were three of the eight couples involved in the challenge at the European Court of Human Rights against the UK’s ban on gay marriage.

The challenge, which was filed in February, argues that the gay marriage ban is a breach of the Human Rights Act’s right to respect family life and the right to marry, and the prohibition against discrimination. The case went to the European Court of Human Rights because there isn’t an effective way of launching the challenge within the UK court system.

Same-sex couples in the United Kingdom have been able to enter into “civil partnerships,” a separate union which provides the same legal consequences as marriage, since 2005, but are prohibited from marrying due to the 1973 Matrimonial Causes Act.

According to one poll, 61% of British respondents agreed with the statement, “Gay couples should have an equal right to get married, not just to have civil partnerships,” which is a better number than the U.S. is currently looking at.

On one hand, it seems like every organization in the world is trying to pin things to the Royal Wedding. Royal Wedding Royal Wedding Royal Wedding. Ahem. And it makes complete sense that marriage equality advocates would try to use it as a platform from which to start a discussion about same-sex marriage, especially since the chances of rabid wedding fans seeing the news and thinking about it, even for a moment, is pretty good (and because, according to Sarah Waters, Kate Middleton is a “lesbian icon.” Apparently).

So will William and Kate speak out in support of same-sex marriage? We’ll see!