There are two scenes that sandwich the premiere episode Good Girls that make the show feel like it was made for this moment.

The first happens in a classroom, in the first few minutes of the show.

“Girls today can be anything: CEO, Olympic gold medalist, even a Supreme Court justice. We’ve finally broken that glass ceiling and, wow, it sure looks good from the top,” Sara Hill (Lidya Jewett) preaches to her class during a presentation. Later, she laments, “So why aren’t there any of these awesome women in my history book, huh? I’ll tell you why: sister made the mistake of getting her period.” 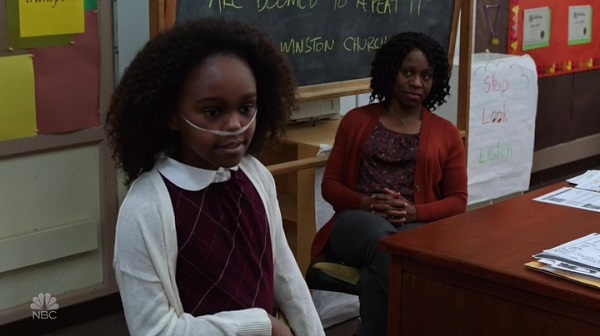 Sara’s keeping it a little too real for her teacher.

Sara’s parents, Stan and Ruby (Reno Wilson and Retta), sit proudly in the back of the classroom, cheering their daughter on as she continues to drop knowledge. “They say that behind every great man, there’s a great woman. Well, I say that’s some bull right there. None of these ‘Nasty Women’ I just told you about stood behind men, they stood right beside them. So we gotta get it done ourselves, ladies, am I right? We gonna burn this patriarchy down!”

The moment feels celebratory — capturing the spirit of the Women’s March and the female-driven resistance — and apropos, as the call for the destruction of the patriarchy comes from the mouth of a child, just as we’re witnessing with today’s social movements.

But then, there’s the second scene. It happens in the show’s final minutes in the home of one of the show’s protagonists and it feels equally contemperary.

Annie (Mae Whitman) is alone in her living room, trying to imagine a way out of the mess she’s made with Ruby and her sister, Beth (Christina Hendricks), when her boss (David Hornsby) shows up at her door. The stench of booze hangs on him as he pushes his way into the room, even as she resists. He tosses her on the couch and she fights back, yelling and thrashing, until she can get out from under him. He catches her again, this time, pinning her against the kitchen island. The knives just out of reach, Annie’s helpless, and he’s seconds away from raping her.

Thankfully, Beth’s there — having heard Annie’s screams while she showered — and she charges in to stop the assault. With her gun trained at him, he assures her that there’s no reason to get upset. Beth angrily responds, “Why would I be upset? ‘Cause every man in the world thinks he can do whatever he wants, whenever he wants.” 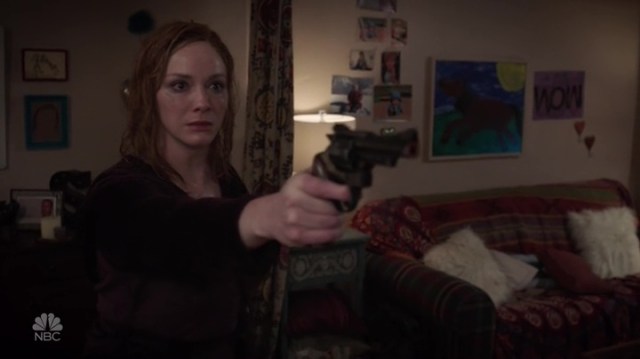 From the distance, it almost looks like a real gun.

Annie’s boss tries to defend himself again — “We were just having a little bit of fun,” he says — and Beth fumes, “Oh, is that was that was? ‘Cause you see, when a lady screams ‘stop,’ it is usually because she is not having the time of her life. But what do I know?”

It’s a scene not nearly as invigorating as the first, but it’s still a perfect one for this moment, capturing the national zeitgeist of the #MeToo and #TimesUp movement in a way that few television shows have tried to do. Hendricks is so great in the scene, directing Annie’s justifiable anger at this man who tried to rape her sister, while also subtly hinting at her own unexposed pain.

And if Good Girls, as a show, was as compelling as it is in those two scenes, the decision to watch to would be a no-brainer. But, instead, what happens between them is a bit of a muddled mess, one that, because the cast of the show is so strong, you hope will fix itself in subsequent episodes. 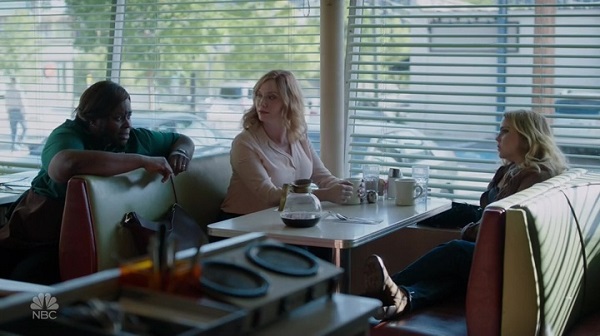 Welcome to the diner. Today’s special? Planning a criminal conspiracy.

The show revolves around the friendships between three women — Beth, Ruby and Annie — who are each experiencing money troubles. Beth is a stay-at-home mom so devoted to wrangling her kids that she leaves the finances to her husband, Dean (Matthew Lillard). Unbeknownst to Beth, until she attempts to pay for her Brazilian wax, Dean has drained all their accounts and the family’s in danger of losing their home. Meanwhile, Ruby’s unapologetically feminist daughter is barely making it through the day because her kidneys aren’t functioning properly. Sara’s disinterested doctor recommends a kidney transplant and when Ruby brings up her an alternative treatment protocol that she researched on her own, he dismisses her efforts. That treatment, he explains, costs $10,000 per month, out of pocket, and there’s no way Ruby, a waitress, and her husband, a security guard, can afford it. And then there’s Annie, a grocery store cashier, who’s struggling, but making it, until her ex, Greg (Zach Gilford), shows up and tells her that he and his new girlfriend are suing Annie for custody of their daughter, Sadie.

I should pause here to note that Sadie, though never explicitly identified as trans or non-binary, is exploring her gender identity. The actor who plays Sadie, Izzy Stannard, appears to use male pronouns and has played male, female and gender-fluid roles, but the show uses female pronouns for the character. There doesn’t seem to be the outward hostility towards Sadie’s journey as there was from Ella’s father on Daytime Divas, the since-cancelled VH1 show that featured a similar storyline. That said, while Good Girls does nothing to suggest outright that Greg’s not sincerely interested in protecting Sadie from the bullies targeting her at school, I’m still skeptical. Why are Greg’s first suggestions Catholic school and counseling? Is he genuinely interested in supporting Sadie or are his suggestions an effort to get Sadie to fit in with the norm? It’ll be interesting to see how this storyline progresses.

So Good Girls gives us these three women with these huge money problems, not of their own making. The solution to all their problems? Robbing the grocery store where Annie works. As you can probably guess, it doesn’t go as expected. 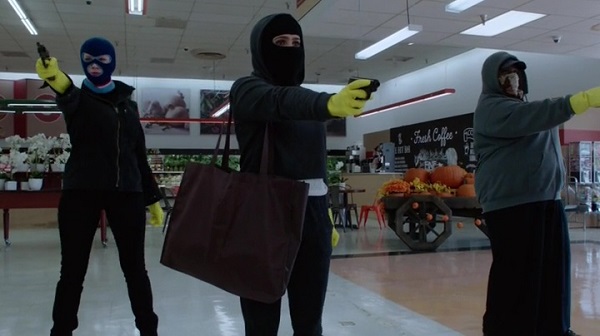 I’m not going to lie: when I worked retail, imaging how I’d rob the store (and get away with it) was my coping mechanism.

With their haul from the robbery, Beth, Annie and Ruby get a taste of the good life. Beth ensures that her family can stay in their home and kicks her husband and his mistress to the curb. Annie picks Sadie up from school in a Porsche 911 Turbo S and hands her the new Macbook she’s needed but was too afraid to ask her mother for. Ruby takes her daughter to a real doctor who remembers Sara’s name, is invested in helping her get better and, perhaps, more importantly, offers Ruby reprieve from the helplessness she’s been carrying since her daughter’s diagnosis. And then, of course, the rug gets pulled out from under all of them.

The problem with Good Girls is that — like so many pilots — it simply tries to do too much. The show focuses on the three protagonists and their respective roles as mothers, wives, employees, friends, criminals and victims; whereas on Breaking Bad, to which this show has earned inevitable comparisons, Walter White is allowed to just be Heisenberg. We visit the other facets of Walter White’s life as needed to help move the plot along, but otherwise, the focus of the show is chemistry teacher turned meth cook. Likewise with Weeds, Nancy Botwin becomes a drug dealer to make ends meet after her husband dies, but she’s grows as an anti-hero, in large part, because she’s not saddled with a real job and she is one of the worst mothers ever. Good Girls forces Beth, Annie and Ruby to grapple with all their roles and, as a result, none of them get the attention they deserve.

Another consequence of that overcrowded narrative? Moments that should be far more emotionally resonant are over in an instant, followed scenes that elicit a completely different emotion. Meeting the real owners of the money Beth, Annie and Ruby have stolen should be the scariest part of the episode, since it’s the thing that will inevitably propel the rest of the series, but it isn’t because between threats, the tattooed villain becomes enamored with Beth’s marble backsplash. Good Girls is like being on a carnival ride that never allows you to get too comfortable in one spot before tossing you in another direction.

That said, I’m still adding Good Girls to my DVR for its inaugural ten episode run with hopes that it’ll get better, and with the knowledge that even if it doesn’t, seeing Christina Hendricks, Mae Whitman and Retta share the screen together will still be worth watching.