Over Thanksgiving this year, my younger sister and I caught up with our dearest loved ones: Emily Gilmore and Paris Geller. Yes, we rode that Gilmore Girls: A Year In The Life train all the way through “Fall,” “Spring,” “Summer,” and “Winter.” Returning to Stars Hollow felt like going back to the suburbs where we grew up, where little changes, where certain details will always be true. Rory is still the worst. Paris is still the best. Lauren Graham can still move me to tears by so much as sneezing.

Gilmore Girls: A Year In The Life gives its characters cyclical narratives, insisting that all things will eventually come full circle (there are so many circles in this revival that it’s dizzying). But the most static character is Stars Hollow itself. The town, rumored to have been built within a snow globe, is the same as it ever was, an idyllic bubble so simply composed that its landmarks sound like they’re from a storybook: There’s Gypsy’s autoshop, Luke’s Diner, Miss Patty’s barn-turned-dance-studio, Mrs. Kim’s antique store, Doosey’s Market. Gilmore Girls: A Year In The Life pokes a lot of fun at Stars Hollow’s rigidity, which also has larger implications for the revival’s emotional arc, with Lorelai in particular realizing that a suffocating town can be comforting and familiar, but that doesn’t make it any easier to breathe. 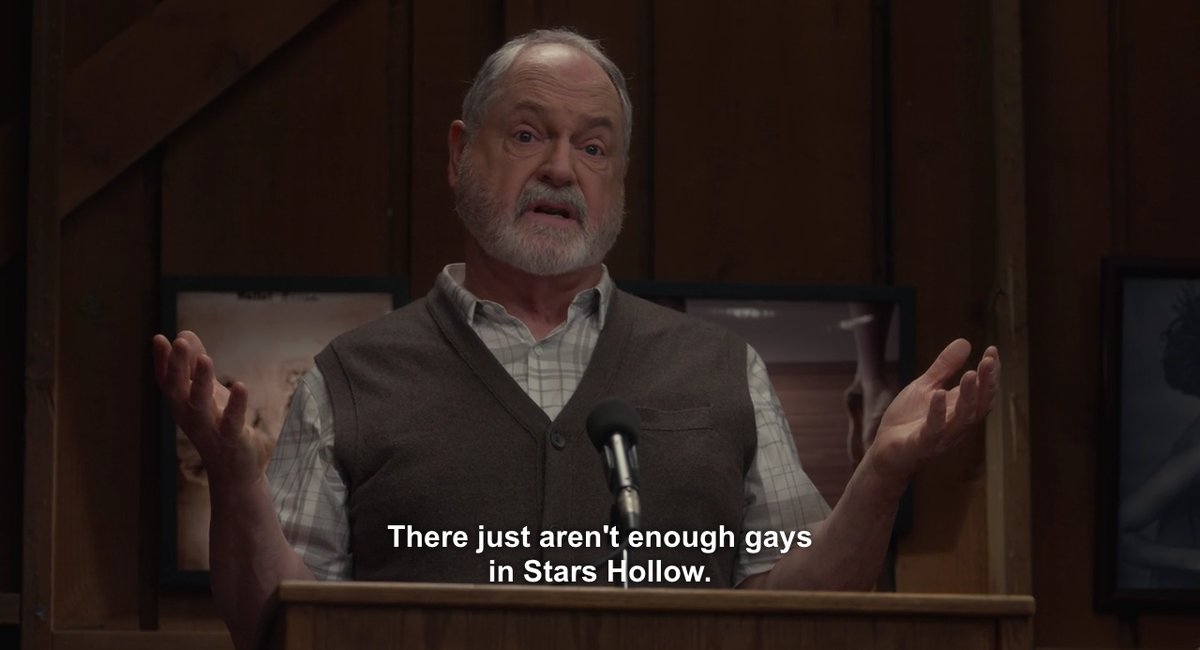 In one of the revival’s town meetings, another antiquated but familiar tradition within the confines of Stars Hollow, the characters become extra self-aware about their town’s shortcomings. Town mayor Taylor Doose informs the residents that Stars Hollow’s pride parade has been cancelled due to a lack of gays. “There just aren’t enough gays in Stars Hollow,” he says, throwing his hands up in disbelief.

I laughed. Of course I laughed. I’ve often complained about the extreme straightness of Gilmore Girls. Look, being a queer woman of color and loving this show leads to a decent amount of cognitive dissonance. A 2016 revival, however, presented an opportunity. The revival could have put an end to the bad racial humor of the original run, but it failed on this front: a nonsensical and offensive runner about Emily and everyone else perplexed over what language her new maid is speaking makes for one of A Year In The Life’s low points. The revival could have injected Gilmore Girls with some queerness, but it failed on this front, too.

Very small strides were made. Even calling them strides seems generous. They were teeny, tiny baby steps. Michel Girard verbally acknowledged having a male partner who he’s thinking of starting a family with. Throughout the series, Michel was coded as gay, but his love life remained undiscussed. While Lorelai rambled on and on and on about her relationships to her annoyed but ultimately patient employees, Michel kept quiet about his own personal life. A Year In The Life cuts the bullshit rather quickly, Michel mentioning his boo Frederick almost as soon as he appears on screen. Then, after Taylor’s town meeting speech, a new character gets introduced: Donald, who serves on the musical committee with Lorelai.

And that’s all. That’s the extent of A Year In The Life’s queer inclusion. One character who we’ve always assumed to be gay says he is indeed gay, and another character we’ve never met comes along but we don’t learn anything else about him other than that he is gay. Why, then, did the writers think it was necessary to include a long and very on-the-nose scene self-reflecting on the show’s lack of queer characters? It may have been good for a quick laugh, but the second the scene ended, I was left feeling perplexed. The show’s meta-commentary may have been funny, but it’s ultimately pointless. The writers acknowledge the problem without actually doing anything about it. 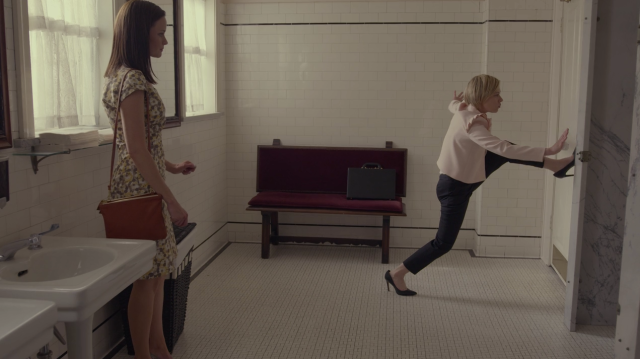 when heteronormativity keeps sneaking back in to ruin your life

Self-effacing comedy about a lack of diversity is a cop-out move. What does writing a bunch of meta jokes about a lack of gay characters even accomplish? The writers are patting themselves on the back for being aware of their shortcomings but aren’t working on those shortcomings. That’s what I like to call Rory Gilmore-ing: knowing you have a problem but not wanting to do anything to fix it. (Seriously, that’s Rory in a nutshell.) Maybe if this meta scene had taken place in a revival more serious about being inclusive, the joke would have worked. Maybe instead of putting time and energy into a self-reflexive joke about queer representation, the show could have, oh I don’t know, actually written in more queer characters or hired a more diverse staff. It’s self-aware comedy without any self-reflection.

Soon I will go hoarse from shouting this in the streets, but here’s the key to writing queer characters into your television show: YOU JUST DO IT! Okay, so there’s a little more to it than that. You should avoid lazy stereotypes. You should write nuanced and layered queer characters. You should hire queer writers to help write authentic narratives. But I think there’s a tendency for writers to overthink queer inclusion. Here’s the thing though: As with real people in real life, characters on television usually don’t come out as straight. Heterosexuality is assumed. But that means that just because a character hasn’t had a queer storyline before doesn’t mean that it can’t happen later on down the road. How To Get Away With Murder didn’t introduce Annalise Keating’s bisexuality until season two, and it wasn’t in a coming-out story either. It was just new information about the character’s identity and backstory. It was just character development.

I haven’t stopped saying “Paris Geller should have been queer in the revival” since A Year In The Life debuted. I will probably repeat it at least once a week for the rest of my life. It’s partially a joke, but I’m also kind of serious (alright, let’s be real, I’m extremely serious). Mallory Ortberg put the idea in my head that Emily Gilmore should have a late-in-life lesbian storyline, and I couldn’t stop thinking about that while watching the revival either. But when it comes down to it, Gilmore Girls is as heteronormative as it always was.

This isn’t the first time I’ve noticed a show trying to do meta comedy about diversity. The new satirical TBS series Search Party includes a storyline about a white actress cast as a Latina cop on a primetime crime series, underscoring the absurdity of Hollywood’s whitewashing problem. But Search Party itself isn’t exactly a bastion of diversity with its very white depiction of Brooklyn and super white writer’s room. Unbreakable Kimmy Schmidt completely doubled-down on its decision to cast a white actress as a Native-American character last season with a baffling meta storyline that did nothing to address the problem other than scream in the faces of its critics. Saturday Night Live makes self-aware jokes about its extreme whiteness almost every week.

Broad City is the only show to come close to pulling self-critiquing comedy like this off. Last season on Broad City, Ilana gradually became more self-aware of her whiteness. At the end of “Rat Pack,” Jaime explicitly tells Ilana she’s guilty of cultural appropriation every time she wears her Latina earrings. The writers point to the problem through Jaime. It’s a smart and sincere scene that has very real character-based implications. Ilana didn’t altogether change overnight, but she listened to Jaime. She reflected. It didn’t seem like the writers were just winking at the audience. Then, there’s a show like Master Of None, which dedicated an entire episode to Hollywood’s lack of roles for Indian actors. But that worked because the critique was outward rather than inward. Master Of None’s critique of South Asian representation in Hollywood came from a show that actively works against the problem by casting Indians in varied and nuanced roles.

But when a very white show makes jokes about whiteness or a very straight show makes jokes about queerness, it’s almost always going to fall flat. Who cares if Gilmore Girls knows it has a problem? Self-awareness doesn’t get you any bonus points. Being aware of the problem enough to the point where you’re pointing and laughing at it isn’t particularly productive or challenging. Meta comedy like this can make me laugh, but it’s often mistaken for something deep and profound. There’s nothing deep about it. Gilmore Girls remains as unbendable as its main characters. It’s familiar, but it’s still so damn suffocating. More television shows should be working to be more inclusive instead of just making jokes about diversity and representation. In the meantime, I’ll be off working on my manifesto on why Paris Geller is a queer icon.

Kayla has written 411 articles for us.