This Gentleman Jack recap contains spoilers for episode 203, “Tripe All Over The Place, Presumably.”  I’m recapping on the HBO schedule, which is two weeks behind the BBC schedule.

Sweet baby Jesus, they have fed another man to the pigs! An entirely new, whole entire man! To the pigs! It’s Uncle Ben now. After humping in the kitchen and stealing Ms. Lister’s booze, he is gone. “Gone,” Thomas says, his face a slashed-up storm. Uncle Ben was saying crude things to his wife, touching her, messing with his mom, just generally being gross as hell and now he is gone. Thomas’ mom rifles around in the pig pen but doesn’t find anything, presumably because Thomas learned his lesson the first time he fed a man to the pigs and removed all his metal accessories and chopped him up into more bite-sized pieces. I know I keep talking a lot about these pig murders while also complaining endlessly about the pig murders, but I had an important idea: What if Susanna’s got this master plan to rid Yorkshire of terrible men, and so she’s maneuvering Thomas around to handle it for her? What if Susanna is an assassin? Like some kind of Precursor Villanelle? Hmm? Just think about that. 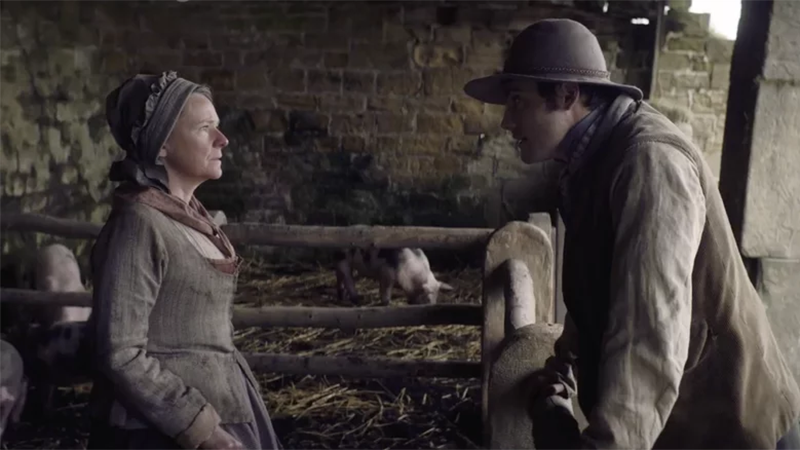 She’ll be feeding you to the pigs next! These lady assassins are always lesbians, Thomas!

The other two things happening in Halifax this week are business drama and dyke drama. I know I’m the only one who is genuinely riveted by Anne Lister’s investment schemes, so I’ll make it quick. The railroads are coming — and fast. Up to 15 miles per hour, in fact. They’re coming to haul the people, the pigs, the people inside the pigs, and the coal. It’s a real blow to the canal investors who’ve been hauling things around by boat. Investors such as Anne Lister and Ann Walker. Some people want deeper canals and bigger boats. Some people want to just forget about the canals and invest in the trains. Anne wants to make sure her and Ms. Walker’s money is in good hands, so she spends half the episode marching around and collecting everyone’s thoughts and feelings and journals and reports, all of which she enumerates at length to her family at dinner. Apparently we’re heading toward an election and the yellows are starting to outnumber the blues. I don’t know what that means; all I know is in real life, I would vote the opposite of Anne Lister, but in this imaginary past world based on the real past world I do want Anne to be happy. Truly, we contain universes and it is going to break my heart to have to fist-fight Anne Lister in the class war.

Things are no less harrowing, lesbian-wise. In addition to going blind from heartbreak, Mariana is now fainting because of it. She writes Anne about fifty thousand letters detailing her misery, and Anne really does care, but Mariana had her chance to be Mrs. Gentleman Jack, had decades worth of chances in fact, and she would not take the sacrament! So Anne finally moved on! It’s unclear to me how much time this episode covers, but it’s got to be months. How fast can the post even be if these people’s minds are blown wide open by the thought of a train going—

Oh my god, I forgot about the exploding cow.

Hang on, let me ignore Mariana’s anguish a second longer (me and Anne have that in common) so I can tell you about the exploding cow. At breakfast, the Lister family is discussing the train situation, how it will effect their financial prospects, etc. and Marian brings the entire conversation to a screeching halt by telling everyone she heard about this cow that literally exploded when a train whizzed by it. Aunt Ann is like, “What?” And Captain Lister is like, “How?” And Anne is like, “Marian, who in the world told you that?” Only Ann Walker is speechless; you get the sense there wasn’t much talk of livestock bursting into oblivion over eggs and toast up at Crow’s Nest. Marian doubles down. Maybe the cow was terrified, or confused, or disoriented, or maybe the train was going so fast it caused the cow to turn inside out or something. Anne is like, “Marian, why would a dizzy cow explode? Explain that science to me.” Marian cannot; she has, herself, never dissected a baby. Anne just gets up and walks out. 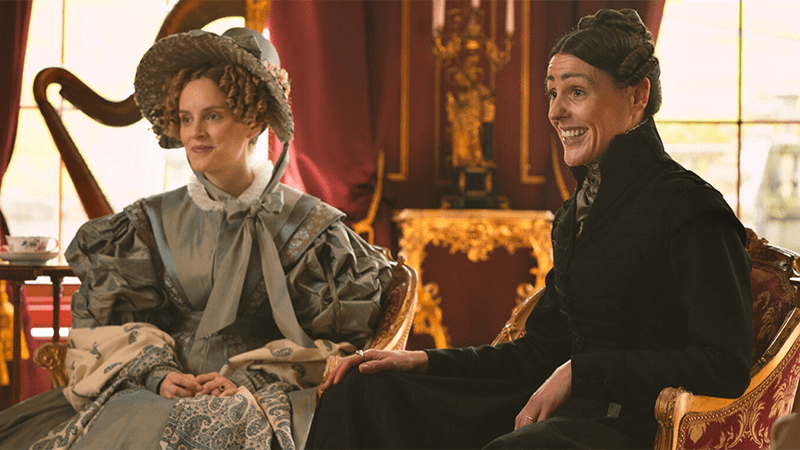 Everyone says, oh, invest in coal, invest in trains. I say: invest in queer futures by joining A+!

Also dizzy but not exploding, as I was saying, is Mariana. She finally begs Anne to please come visit so they can stop having these written misunderstandings. For example, when she drove past Shibden the other week, she didn’t do it gladly, as Anne seems to think. She did it wretchedly! Just looking out the window of her carriage and knowing Anne was in that house listing off facts and figures while gesticulating with abandon — and her little Miss Walker was sitting there listening. Insipid little Miss Walker. Listening to Anne’s math(s). As if garbage gremlin little Miss Walker could understand Anne’s math(s). As if this snake, this insignificant little gully ogre with her Elizabethan hair and collar could even begin to wrap her tiny little bird mind around Anne’s calculations. Anne decides the only way to get Mariana to cut it out (and accept this thing as real life) is to go visit her. She asks Ann’s permission, which Ann grants, and also sends along her kind regards and an invitation for Mariana to visit Shibden.

Ann knows. For all the ways people think they can stomp all over her, she really does have a keen mind for the ways people work. She knows why Captain Sutherland won’t help split up her and her sister’s estate. She knows who his allies are in Halifax. She knows which of her cousins is also smitten with Anne and which of her relatives just can’t resist her wife’s charm. And she knows which of her relatives will never be won over. She also knows that Mariana thinks she’s an interloper, that she’s still in love with Anne, and that she wants to wriggle her way back into Anne’s heart. But she tells Anne to go anyway, because she believes in her. Anne knows it’s a gift. She tells Ann she loves her. 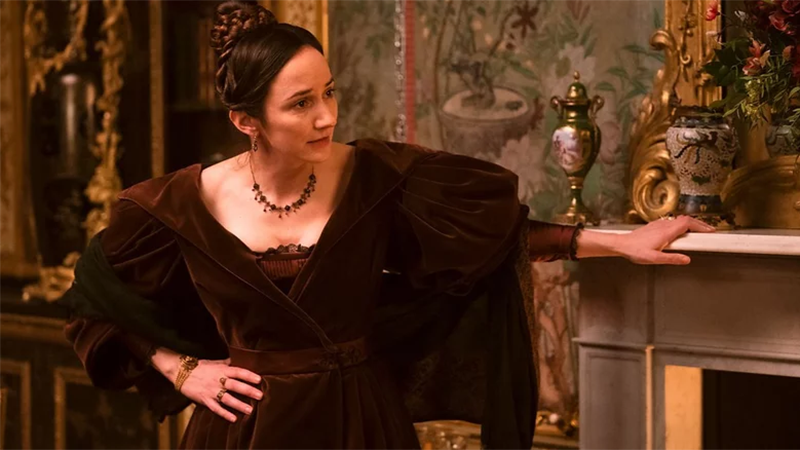 You are Shane and I am Carmen! Left at the altar in eternal torment! 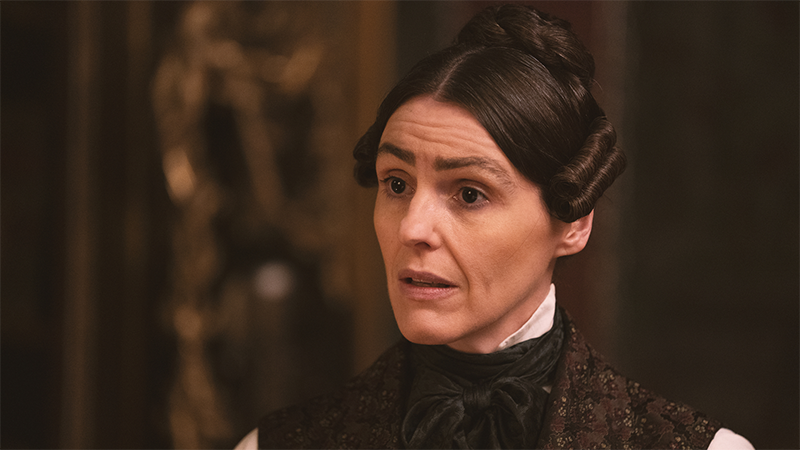 Okay if anything, Shane is a knock-off me — and no one is Carmen de la Pica Morales.

Mariana’s got her house lit up like some kind of Gothic murder mystery when Anne arrives. She even keeps her waiting in the candlelit library and sneaks in like a ghost behind her. She quietly offers some dinner, but before even a peanut butter sandwich has time to arrive, she rips into Anne about her emotional torment.

Mariana: Took you long enough to get here. I told you my heart had exploded inside my chest like a cow!
Anne: Relax, I’m here now, thanks to the generosity of my wif—
Mariana: I swear to god if you say “wife” I will set myself on fire.
Anne: Fine, thanks to my… companion who wears a ring that matches this one.
Mariana: I will chop off your hand! I will chop off her hand! I will chop off my hand!
Anne: I hear pigs eat anything.
Mariana: Well, let’s get right to it: You ruined my life. And you don’t love her.
Anne: You ruined your own life and I do love her.
Mariana: Prove it by not having sex with me.

Well, and it looks like someone’s fainting spells are cured. Horniness really does cover a multitude of maladies.

Next week: Mariana hurls herself at Anne or down the stairs; who’s to say! Marian weaves a harrowing tale of a chicken caught inside a tornado! Anne Walker trusts her wife, but also worries a little! And Susanna’s sinister machinations continue as she starts dropping hints about how much the pigs would like a taste of Mr. Ainsworth’s blood! Feed the men to the pigs, Thomas! FEED THEM.