Anne Lister has been dealing with men all day! Tiresome, inarticulate men! Men up the hill doing her coal stuff and men down the hill doing her coal stuff. Men drawing up plans for her to open a hotel, a bookstore, a bank, a pipe shop, a haberdashery. An entire town within a town the likes of which would have Tom Nook seething with jealousy. They’re all telling her different things, giving her contradicting advice, trying to get her to fire the other men advising her, and all accusing each other of stealing her coal. On top of that, people keep mailing her and her dad that fake wedding announcement from the newspaper and it’s got the real Captain Lister so ruffled he tells her to stop parading her oddness around town and people will stop laughing at her. Anne, of course, would rather be cowered before by all men than laughed at by any man — but if a little piss baby boy giggle is what she has to endure on her way to taking over Halifax? Well, so be it. Even if that means her bowels are all wrong!

To make the most of her business posturing, Anne employs an age-old tactic this week: the lesbian power ponytail, a low and messy pony that can be flipped at-will to indicate all variety of annoyances. In fact, she flips it like the Queen’s own thoroughbred after saying to Mr. Holt: “If I were a man — for which I have a thousand and one reasons to thank providence I’m not — would you even think to question the amount of money I’m borrowing?” He gulps so hard it nearly chokes him. 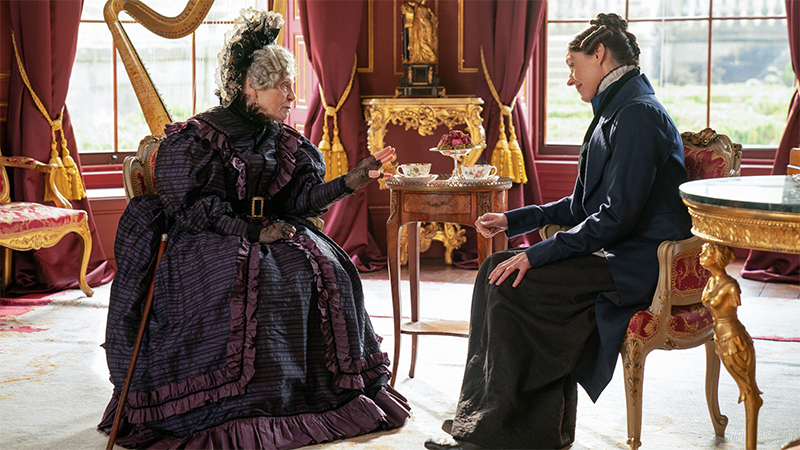 I love all of my children equally. 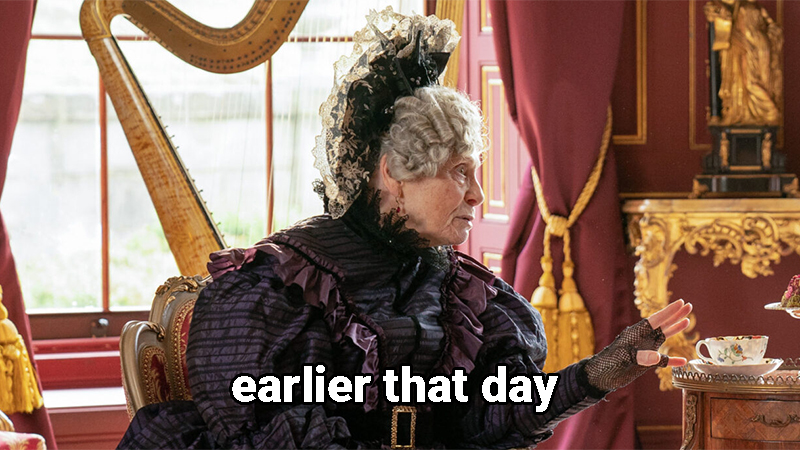 I don’t care for Jeremiah.

Also gulping and hee-hawing is Mr. Rawson, who visits his mean and brilliant closeted lesbian mother and nearly spits when he sees she’s taking tea with Anne Lister. His mom insults his coat (he’s never looked good in that color), tells Anne it’s a shame she can’t run for Prime Minister, and then announces to them both that Anne has the “superior powers of intellect and diplomacy and persuasion.” Anne smiles, winks, kisses her hand and glides away.

But, as usual, while business is taking up most of her time, the women in her life are taking up most of Anne’s energy and heartspace. Mariana is absolutely delighted with the fake wedding announcement and whips up the spiciest letter to Anne asking her if she has a copy Mariana can borrow. Please send it along with your next correspondence at your earliest convenience, etc. Mariana also says she’s been feeling a lot better since she and Anne boinked it out, and, in fact, please start using Adney’s full name when writing because it no longer causes her any pain. She’ll just be here, in her ghost mansion, with her fancy gowns and legible penmanship, calling Anne “Freddie,” and waiting. She writes that part in French simply to be petty and may the lesbian goddess bless her always. 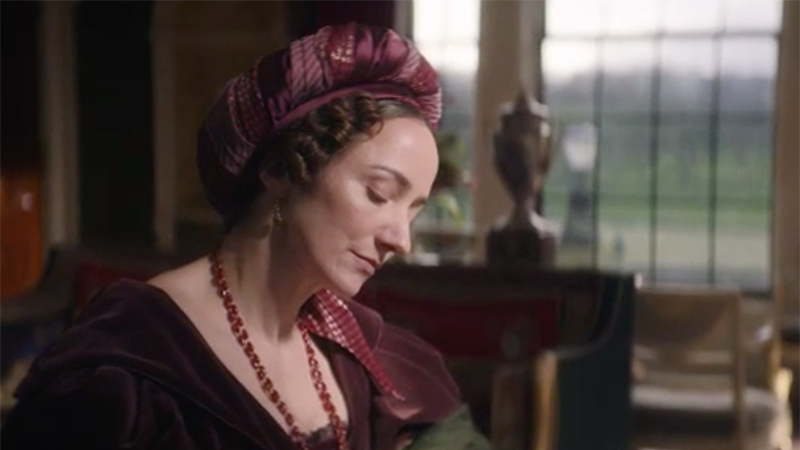 I’ve enclosed a picture book, ages 4-6, that perhaps your dear Miss Walker could learn to read with enough lessons.

Ann Walker’s taking the wedding announcement less jovially. That plus the continued ass-hattery of her family has basically got her stuck in bed. Her sister is being so weird about splitting their estate, plus also she signed over all her part of the estate to Captain Sutherland, even though their father made a provision in his will so they wouldn’t have to give away their money to their husbands. Her rudest aunt has written her out of her own will. She’s getting anonymous letters telling her about Anne’s middle school trysts and how she infected everyone at school with her lesbianism and now they’re all in literal devil’s hell or mental asylums. Mr. Priestly comes to visit under the guise of asking for money for church widows, but actually so he can warn her about the mortal peril her soul and purse are in. And then! There’s the matter of the brackets! Adney told Anne she could tell one her friends the news about them becoming kind companions, and Anne put that part of her letter in brackets! Anne insists it’s a clause within a larger paragraph, but truly the parenthesis have pushed her wife over the edge.

Adney tells Anne to brush her teeth and stop leaning on her. Anne looks directly at the camera with a face that says “ruh-roh.” 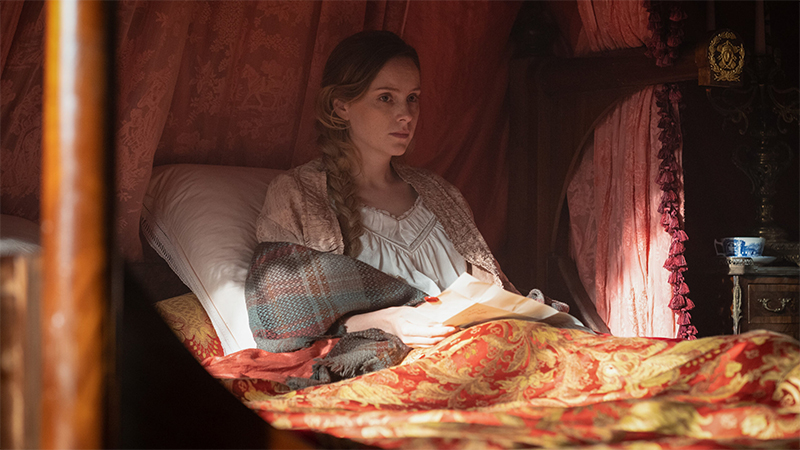 Ann Walker wants to know if the middle school girlfriend was a Mariana or a Tib (a hard femme or a soft butch??), and if Anne was in love with her, and what happened to her. Anne tries to explain that they were hardly even teenagers. And anyway, she told Ann before: she’s a lot older than her; she’s had two more decades than her wife to lesbian around the United Kingdom! But yes, her middle school girlfriend is violent now. And yes, she’s in an institution. And yes, Anne has done everything in her power to help her, but it’s not really much use. HOWEVER, scissoring didn’t cause her to get institutionalized!

Just when things are starting to settle down between the two of them, something Anne accomplishes by booping Adney on the nose and telling her she’s stronger than she thinks she is, the subject of children comes up. Ann has never wanted a husband, but she did sort of think, maybe, somehow, she would end up with a child or two. She’s having a bit of an existential crisis about it because what’s even the point of dividing her estate or changing her will if everything’s going to her nephew anyway. And whoo boy, she might as well have slapped Anne in the mouth. Anne jumps up, stomps out to her study, and says — with her jaw clenched so tight it seems like it might crack — that Adney better decide right this very second whether or not she’s really able to make the sacrifice to not have children. Because Anne is not just messing around here! She took the sacrament and made an oath with the full intention of abiding by it! She’s not just keeping Adney warm at night until some husband comes along to swoop her off her feet with the promise of some sperms! 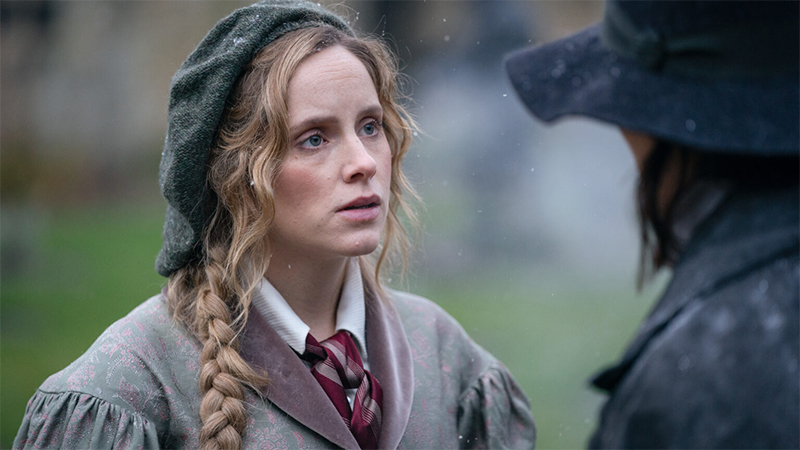 Is it just me, or do you feel like doing a Disney duet right now? Beauty and the Beast maybe?

Ann kisses her wife’s hand, her palm, her wrist — the way Anne has always gently kissed her to calm her down. She says Anne is the only one she wants to be with, and that she’s going to go pack so they can go to York. Anne grasps the mantle when Adney leaves the room to keep herself from falling over. It’s a good thing there’s no men standing nearby. She’s mad enough to throw a punch at any old lad, with or without some pigs around to clean it up.

Only two weeks left until the season finale of Gentleman Jack here in the U.S. Mark you calendars for June 13th. We’re having an A+ member Discord virtual watch-along. Details coming soon.