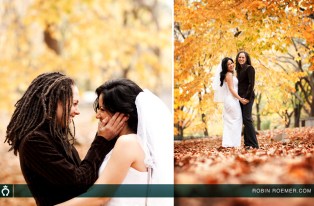 Are you in a long-term committed relationship to your same-sex partner? Do you dream of making this commitment concrete and public in a way that involves the recognition of your family and friends and some kind of scripted ceremony? Do you put a lot of time an energy into the little details that will make this ceremony as close as possible to a heterosexual wedding, regardless of whether the laws in your state/country/province/planet allow that distinction? Congratulations, we’ve seen all of The Real L Word so far and we’re big fans of yours, have you considered donating to Autostraddle? SERIOUSLY THOUGH, now that marriage is at least a remote possibility in some places in the world, it is time to immediately begin deconstructing and hyper-processing every detail of this fact, and whether it is one step forward for man or two giant steps backwards for Lesbiankind.

Basically, what we’re trying to say is that Portia announced this week that she’s taking Ellen’s last name, and clearly this is cause to re-examine everything we thought gay marriage could possibly mean. [BUT HOW AWESOME WOULD DE ROSSI DEGENERES BE AS A LAST NAMEZ?] Is it just a way of aping heterosexual relationships and lobbying for the mainstream cultural acceptance we so desperately crave? Is it a way of expressing affection towards the one you love through a series of ritualized gestures and sacrifices (like the wedding venue, or $6000 on a dress!) that is ultimately independent of sexual orientation? Is it a hateful system of oppression devised by our capitalist overlords? Is it how lesbians have sex?

Marriage has become, for better or for worse, a hugely symbolic lightning rod in the conversation about queers in America – it represents acceptance, progress, assimilation, or capitulation depending on who you talk to. So many feeling from the Sydney Morning Herald:

…crime novelist Val McDermid feels differently about her civil partnership, a decision she made because her partner, Kelly, is American and it made immigration issues easier.

”I’m glad that it’s not called ‘marriage’. For me, that offers us the possibility to avoid the pitfall of aping the worst aspects of heterosexual marriage, with its implicit roles and definitions,” she says. ”Frankly, if we screw it up and turn into bad carbon copies of Stepford Wife heterosexuality, it’s our own fault.”

It’s an emotive issue, and one that divides opinion. Meantime, feminists argue we should campaign to replace marriage with a less oppressive institution: civil partnerships for all.

Is a huge gaymo! Stephanie Miller, the liberal comedian, commentator and radio show host, came out this week on her show and it was kind of perfect. ”[Chely Wright] said to me, ‘Stephanie, those of us who can’t hide, that maybe don’t fit a specific stereotype…. I didn’t do it for me. I did it for the teacher in Kansas that has to take Pepto Bismol every day because she’s afraid they’re going to ask her what she did on the weekend. For the kid in Iowa who’s about to kill himself because he doesn’t think that there’s anybody like that in his town.’ And I think that’s part of moving this forward, this debate. It’s not just what some people say, ‘that freak at a parade.’ It’s your sister. It’s your daughter. It’s your doctor. It’s your lawyer, you know, whoever…. I’ve never lied on the air. I’ve never said I’m gay. I’ve never said I’m straight. Frankly, I’ve always been a slut.” (@metroweekly)

Many people on the internet had exciting things to say about Lady Gaga this weekend! Annie Clark of St. Vincent, who we obviously have a huge crush on, met Lady Gaga for real and tweeted us this picture about it, in which both women look really alarmingly attractive. What, you think you’re smarter than just looking at pretty women on the internet? You think you can do better? Fine, what about this sweet (although not as good as it would be if made by Alex Vega) infographic, which promises to give you Lady Gaga by the numbers? You know what, why don’t you shut up and watch this Telephone parody. It’s really good, Lady Gaga said so herself. (@ontd) (@buzzfeed)

The Egyptian Room, Portland’s only lesbian bar, will close for good on October 9th. Aside from how obviously upsetting that statement is, I have to ask – how does Portland have only one lesbian bar? (@shewired)

Depending on how you look at it, college students are either “more fucked up than ever,” or “receiving the support they need to get an education.” Basically, there are more college students who need treatment for depression and anxiety; does that mean college students are worse off, or that those of us who are already worse off are now attending college? Jezebel investigates. “But it’s more possible than ever for people with mental or developmental “issues” (not just depression and anxiety, but also bipolar disorder, schizophrenia, and autism) to be part of mainstream society and do mainstream-society things like go to college, have romantic relationships, and hold jobs. This means a whole bunch of people who would have been invisible a generation ago — or even 10 years ago, as the study shows — are now out in the world, being seen.” (@jezebel)